Where does the photon that stimulates an atom's stimulated emission come from?

When I read the concept of stimulated emission I have the following doubt.

From where does the photon to start stimulated emission come from? Every book simply says that a photon with right amount of energy stimulates the photon.

Stimulated emission is the process by which an incoming photon of a specific frequency can interact with an excited atomic electron (or other excited molecular state), causing it to drop to a lower energy level. The liberated energy transfers to the electromagnetic field, creating a new photon with a phase, frequency, polarization, and direction of travel that are all identical to the photons of the incident wave. This is in contrast to spontaneous emission, which occurs at random intervals without regard to the ambient electromagnetic field. Wiki definition`

If a laser-active atom or ion is in an excited state, it may after some time spontaneously decay into a lower energy level, releasing energy in the form of a photon, emitted in a random spatial direction. This process is called spontaneous emission.

However, it is also possible that the photon emission is stimulated by incoming photons, if these have a suitable photon energy; this is called stimulated emission. In that case, a photon is emitted into the mode of the incoming photon. In effect, the power of the incoming radiation is amplified. This is the physical basis of light amplification in laser amplifiers and laser oscillators.

Where does the initial photons come from

Now the secret is that the incoming foton can be obtained in whichever way you prefer! It can comes from light itself for example! More the light is intense, more the effect of amplification is sensible!

EDIT: Stimulated emission was discovered theoretically by Einstein already in 1920, while the first laser theoretically invented is dated in 1958 by Charles H. Townes and realized for the first time by two americans T. H. Maiman and A. Javan, and russians N.G. Basov and A.M. Prochorov, in the 60's. 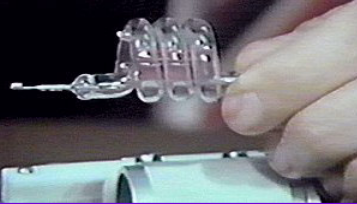 As you can see, the photons come from light, that is travelling in sthe tiny spiral, as one can easily expect!

Because same atoms form laser active medium they have the same energy level, so one release photons with the right energy that can be absorbed by another. 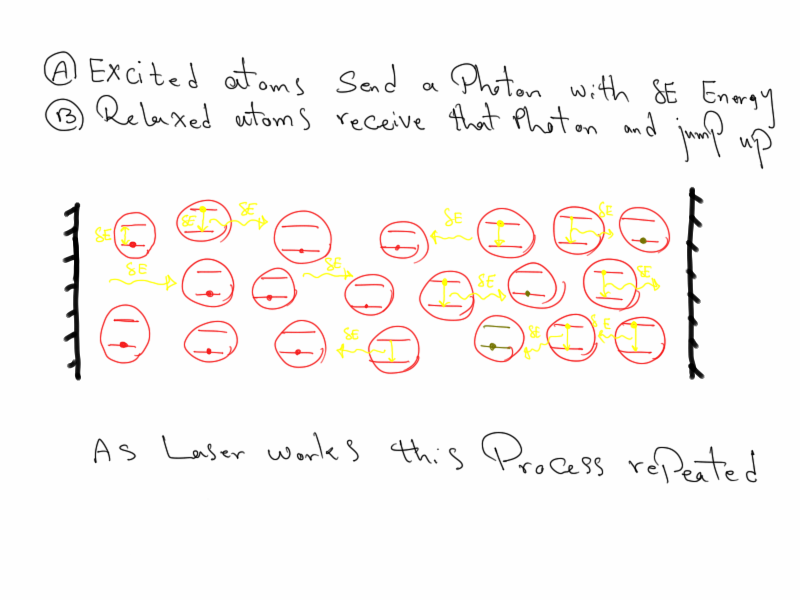 For completeness, the quantum mechanical solution that describes stimulated emission is mentioned here:

Not the answer you're looking for? Browse other questions tagged laser photon-emission or ask your own question.