I have recently read how the Gaussian wave packet spreads while propagating. see: http://en.wikipedia.org/wiki/Wave_packet#Gaussian_wavepackets_in_quantum_mechanics

The Gaussian wavepacket only spreads in the free Schrodinger equation. It doesn't spread in the case where you have a harmonic oscillator, and the Gaussian width is equal to that of the ground state wavefunction. For other Gaussians in an oscillator, the width oscillates, growing and shrinking.

The fundamental solution of the diffusion equation for initial conditions a delta function at $t=0$ and $x=0$ is the spreading Gaussian:

You can see this works by substituting, but it is also obvious from a path integral. To get the spreading Schrodinger packet, substitute $it$ for t.

Ron's answer is (as always :-) definitive, and if you're going to accept an answer you should accept his. However I thought it was worth attempting a more general explanation.

The reason for this is that the gaussian has a spread of momentum related to the uncertainty principle $\Delta p\Delta x \ge \hbar/2$. That means there is a spread of velocities and this means the gaussian has to spread out. I'm reluctant to say that different bits of the packet are moving at different velocities because this is attempting a classical analogy that is misleading, but it hopefully gives you some physical intuition as to what is going on.

The speed of the wave packet is given by the derivative of the Hamiltonian against the momentum.

However, a localized field with a Gaussian shape has (via the Fourier transform) a Gaussian distribution of $p$ in momentum space. The relation

means that there will be a range of speeds instead of a single one and so, in general, the wave-packet will spread. 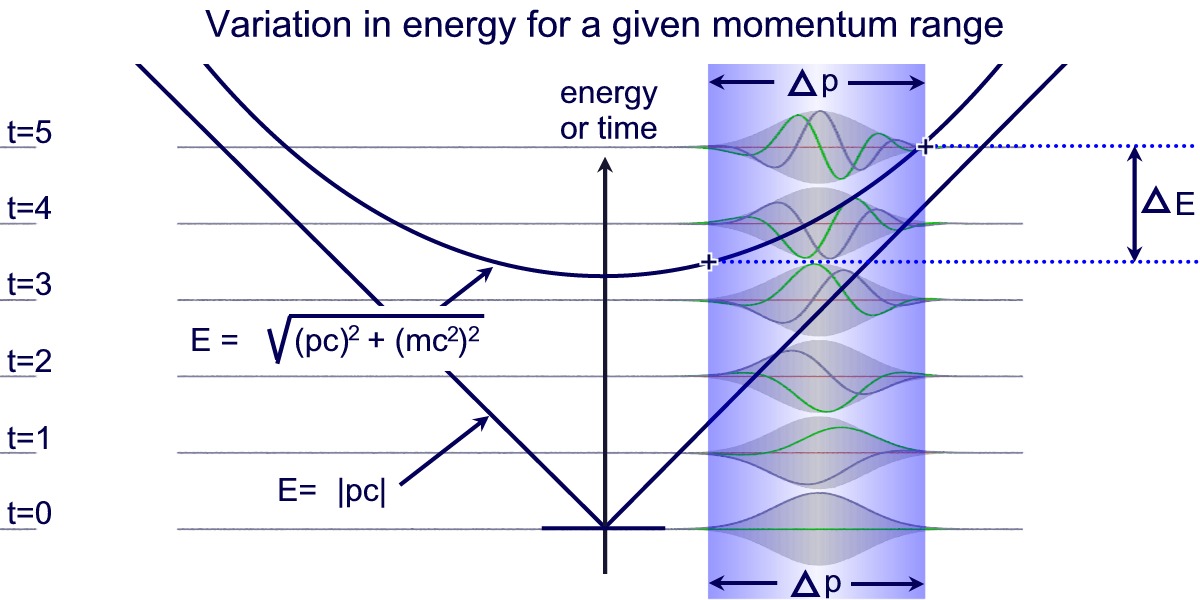 The variation is approximately given by.

Given that Heisenberg's uncertainty relation $\Delta x \Delta p \geq \hbar/2$ can be derived by Fourier analysis, which in the case of a Gaussian shaped wave-function becomes $\Delta x \Delta p = \hbar/2$, the minimum value, we can write.

Where $\Delta x$ is the width. One can reason that the overall shape of a wave-function changes faster if $\Delta x$ is smaller for a given speed-variation $\Delta v$. We can define a dimension-less quantity shape, which has derivative in time which gives us an approximation of the relative spreading of the wave-function in time.

Working out the second order derivative gives us.

Which leads us to our final expression here.

If we remove the gamma's then we get the expression for the rest frame.

We can summarize the results as: 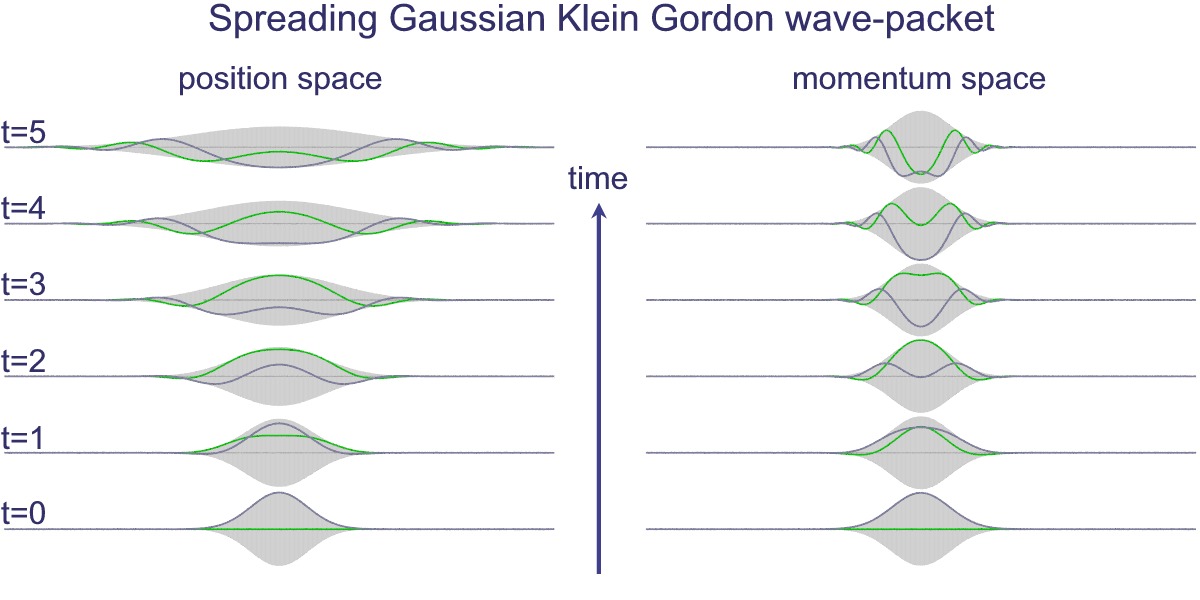 From figure. 2 we can read the mathematical mechanism which leads to spreading. The variation $\Delta p$ of the momentum stays the same over time. It is the frequency dependency on the momentum

which leads to a phase change over $p$.

The phase change is opposite at both sides of the center-momentum. These phase-changes lead to (opposite) translations of the wave-function in position space, this is the spreading. The value $\Delta x$ in our expression stays constant because $\Delta p$ stays constant, it is the initial $\Delta x$ corresponding to the pure Gaussian at $t$=$0$.

We can work out a few numerical example to get an idea of the spreading rates. From the wide range of wavelength sizes, we can classify the Compton radius as the small size limit, although there is in principle no real barrier to go to even smaller sized wave-packets.

If we replace $\Delta x$ with twice the Compton radius $r_c=\hbar/mc$ then, assuming that our approximation is still reasonably valid in this range.

To confine an electron-field to a Compton radius-like volume one needs a positive charge of $~$137e, The inner-most electrons of heavy elements come close to being confined into such a small area. The Compton radius for electrons is $3.861592696\,10^{-13}$ meter.

The size of the wave-packet will grow fast. For instance, the famous single electron interference experiment of Akira Tomomura (see figure 3), which demonstrated the single-electron build-up of an interference pattern, shows that the electron fields in the experiment must at least be several micrometers wide. This is a factor 100,000 wider as in the confinement of the Bohr radius.

The explanation is really very simple to understand intuitively, and very beautiful.

Imagine that a particle an uncertainity in its velocity $v$ of $\delta v$. Suppose at $t=0$ we have $x=x_{0}$. After $t=T$, the location of the particle will be given by the range $(x_{0}+Tv-T\delta v,x_{0}+Tv+T\delta v)$, because we dont know the exact velocity the particle started with. It evident that a probability of finding a particle has changed from being localised in the beginning to being diffused after some time: this is wave packet spreading.

Note that the range (wave packet size) increases with time monotonically, this means that even if we started with a diffused particle density for general case, it will just become much more diffused by extension of the arguement.

A free particle with a gaussian wave function is then a continuous superposition of momentum, and thus energy, eigenstates.

Since the phase of the different momentum eigenstates evolve at a different rate, the way the various components constructively/destructively add evolves in time.

When all the phases "line up" just so, we get the minimum uncertainty wave packet. As time evolves, the wave packet spreads since the phases evolve at different rates.

Not the answer you're looking for? Browse other questions tagged quantum-mechanics wavefunction heisenberg-uncertainty-principle or ask your own question.

11
Is it possible for $\Delta x$ ($\sigma_x$) of any free particle wave packet to be decreasing at any time?
2
Can quantum particles spread out over large distances?
-1
Gaussian State Spread