Qualitative understanding on why solids expand

I'm trying to understand better why solids expand, and what I've been looking at to help guide my understanding is the following graphic from my lecture notes: 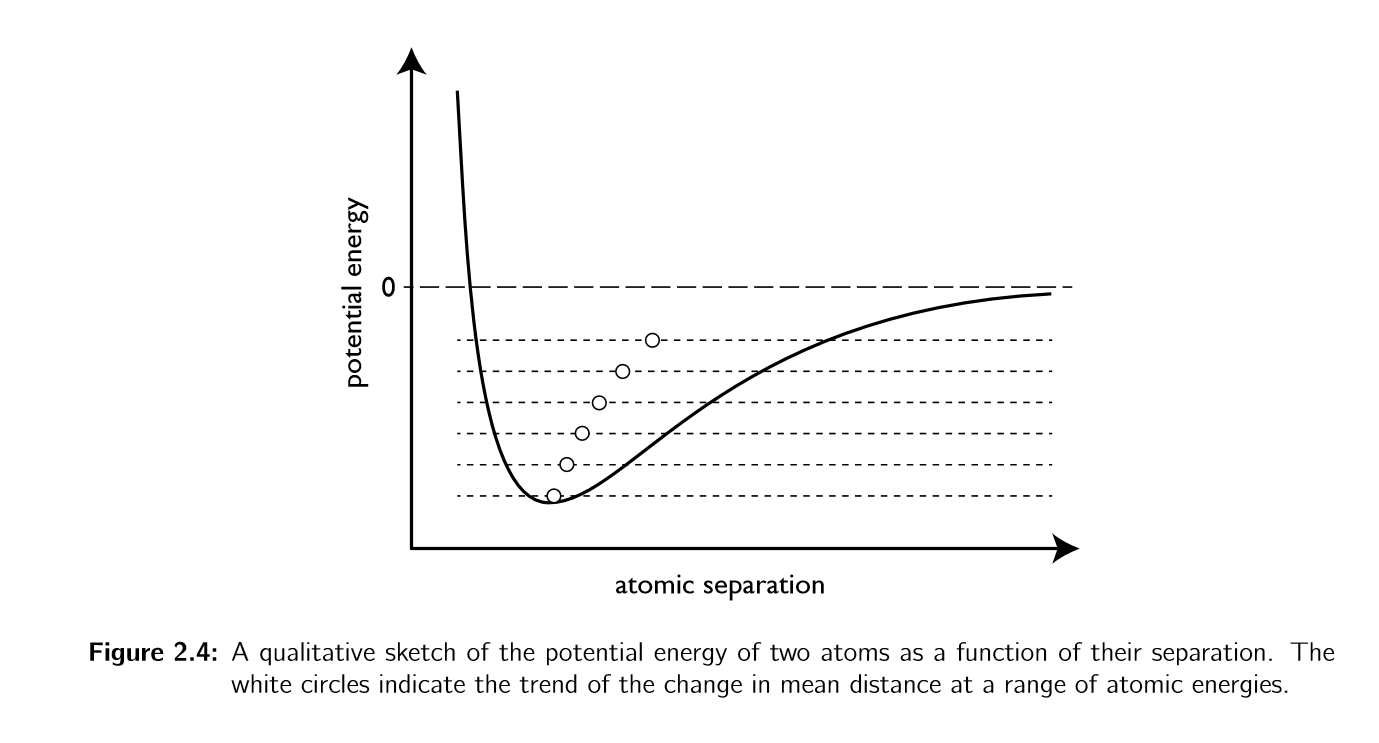 Now, to illustrate what I think is going on here I'm going to try and explain my thought process:

Thus, I have two confusions with this:

Why isn't the potential change symmetrical?

Why does the particle being on one end of its motion around its nominal position explain why the average separation of the vibrating particles is longer?

Visualize this like old school paddle ball toy. When the atoms get really close together (ball hits the paddle), there is a very sudden and very strong repulsive force that pushes them apart. However, as the atoms get farther apart (ball moves away from the paddle and stretches out the elastic string) there is a weaker attractive force that slowly pulls them back together again. The analogy breaks down because for atoms, the attractive force is weaker the farther apart you separate them, but hopefully you get the idea of "strong, sharp repulsion" versus "weak, gradual attraction."

Imagine that potential function were a literal (frictionless) hill in that exact shape. You release a marble from the right edge, just lower than the highest point at the right. That marble will slowly start to roll down in toward the bottom, picking up speed gradually. It will then hit the bottom at high speed and shot up the steep wall to the left, but then come right back down very fast because the wall is so steep. Then it will roll off to the right again and slowly lose speed until it gradually comes to a stop, turns around, and begins the process again. On average (with respect to time) the marble spends more time on the right part of the potential, where it is farther away, than on the left part, where it is closer. This is just because the right side is less steep. Likewise, the atoms spend more time farther apart because the (attractive) restoring force is weaker for separation than it is for repulsion. If the atoms on average are spending more time farther apart, then the solid as a whole is on average larger, because its atoms are more separated

Not the answer you're looking for? Browse other questions tagged thermodynamics vibrations solid-mechanics or ask your own question.

5
Why is everything floating in space so cold?
2
Why is there a Global Minimum for the Morse Potential?
4
Why it is colder in mountains, at high altitudes?
1
Why does a magnet loose magnetic strength when heated?
10
Why solids expand on heating
8
How does a guitar work?
3
Better understanding the Clausius Inequality
3
How can the heat capacity of diamond be so low?
1
Thermodynamics - do all particles in a system undergo a state transition at exactly the same time?
1
How does heating up a gas affect the average speed of the gas particles?