Consider a common bar magnet, magnet 1 resting on a surface with its North pole facing up. Suspended distance $y$ above it (supported side-to-side by a plastic tube) is a second, smaller bar magnet, magnet 2, with its North pole facing down. The magnetic forces between them exceed the force of gravity, and keep magnet 2 suspended. Consider some material, material-X that is moving towards the gap between the two magnets at an initial velocity $v$.

Does a material, material-X exist that would reduce the distance $y$ between the two magnets, and pass through the gap without changing velocity $v$? 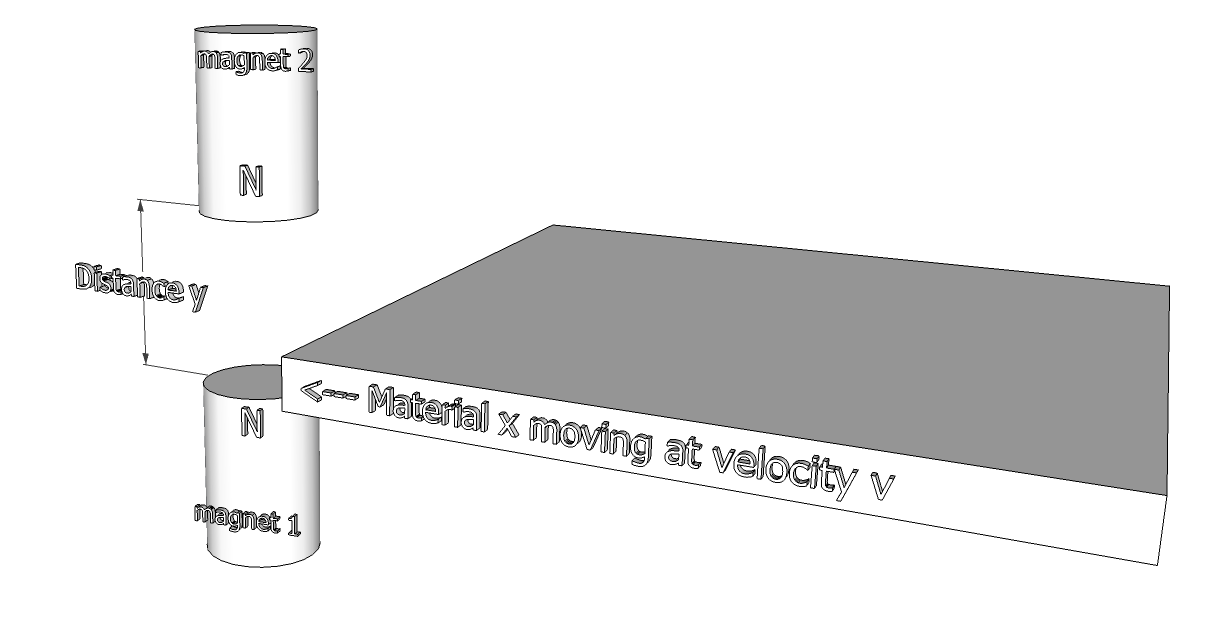 The material you are looking for could be a super conductor. These material have zero resistance for current and thus can compensate penetrating field lines within the first layers of the material. This phenomenon is called the Meissner effect and is the very definition of the supra-conductive state.

In your case of a plate between two magnets, this would definitively reduce $y$.

Here, normally the eddy currents induced by a magnetic field lead to a loss of power, given by:

since, however, a super conductor has zero resistance and thus, de facto,

no kinetic energy should be lost, and thus the velocity will remain unchanged.

There is only one problem:

Superconductor can only exist under very low temperature, so this might not be realizable in the case of your machine...you would at least need a cooling system working with liquid nitrogen to cool it.

There exist materials with very large magnetic permeability, like the so-called µ-metal. They are used to fabricate shields which attenuate the magnetic field of the Earth at the electron-beam path in sensitive electron-optical instruments.

Since your question combines two distinct parts, I will split it in order to address each of them them separately.

1. Static case: Do the magnetic poles come closer to each another when a magnetically shielding plate is placed between them?

Mu-materials do not "kill" the magnetic field between your magnetic poles, but only divert its direction by channeling part of it into the metallic shield. This would strongly alter the field strength ${\bf B}$ at the shield surface, by almost suppressing its parallel components. This results in a reduced magnetic pressure $p=\frac{\bf B^2}{8 \pi \mu}$ in the immediate vicinity of the shield surface. If this reduction of the magnetic field at the shield would significantly alter the magnetic pressure at the site of the magnets causing them to move? A more detailed calculation would be here necessary, I am afraid.

2. Movement of the plate: Is it possible that the velocity of the shielding plate will not be altered?

Consider the following very simple and intuitive experiment: take a copper pipe and hold it vertically. Take a small magnet and let it fall inside the pipe. The magnet falls: i) slowly and ii) with uniform speed.

Your geometry can be made similar to that of the falling pipe: consider a column of magnets levitating upon each other, i.e. with paired poles, N-N and S-S. Now take a "multi-plate" shield made of parallel sheets, firmly kept in place at equal distance from each other (like a 2D comb). This wold mimic a multiple falling pipes in parallel.

If you now hold the column of magnets in vertical direction and you pull the multi-plate with constant force (analogue of gravity) through them, then you will reach a regime of constant velocity - by analogy with the falling pipe experiment.

This suggest that the column of magnets or better put, their magnetic field, acts on the copper plates a viscous medium: $$m_{plate}\dot{v}=-\gamma_{\bf B} \ v+F_{pull}$$ where $\gamma_{\bf B}$ would be an effective friction coefficient due to the magnetic field, perturbed by the presence of the plates. After some time you will eventually reach a regime where the force of friction would compensate your pull and the velocity will remain constant: $v= \frac{F_{pull}}{\gamma_{\bf B}}$.

If this speed is equal to the speed you had before pulling the plate(s) into the magnetic field, it is a matter of how you manage your force of pull. Note: if no pull, then the plate will be simply stopped by the magnetic brake effect. So you have to pull accordingly, if you want to have constant velocity. 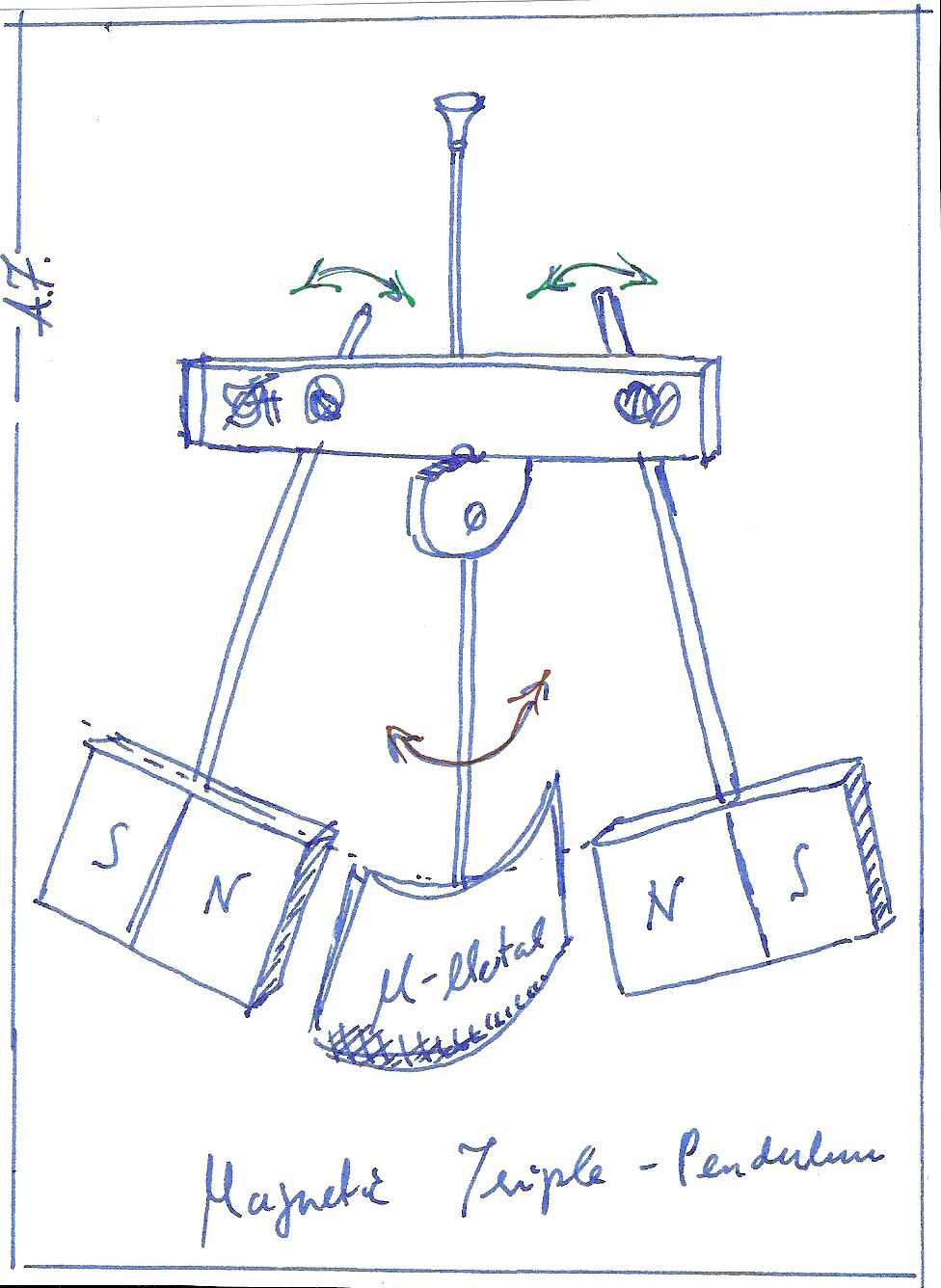 Any material with a permeabilty mu different from the one of air would modify the equilibrium. metglas's permeability is 10^6 time greater than the permeability of air and any super conductor has a zero mu.

Any material which is not conductor would not be affected by its motion through B. In a conductor, a varying B induces an electric field than runs a current. The induced current exerts a JxB force on the conductor.

NO. actio = re-action: if A affects B, then B affects A. So, any material that reduces the magnetic field, and if only by deflecting it, is affected by it in some way.

0
Can a magnetic field alone be used to move a metallic object within a contained tube?