Spin and its connection to magnetic field

How the intrinsic spin of an electron results in a magnetic field? How does spin couples to the magnetic field? I mean to ask how does the phenomenon of Spin orbit coupling happens physically? Is the electron really spinning or not?

The electron is not spinning. Elementary particles are considered to be point-like particles, meaning that they do not have an internal structure. The spin is, as you say, an intrinsic property of particles. It is a pure quantum mechanical property that particles just have. The spin induces a spin magnetic moment: $$\vec{\mu_{s}}=g\frac{q}{2m}\vec{S}$$ So if an external magnetic field is applied, it will exert a torque on the particle's magnetic moment depending on its orientation with respect to the field. $$\vec{\tau}=\vec{\mu}\times\vec{B}$$

Just as said in the other quite exhaustive answers, I would remark that the image 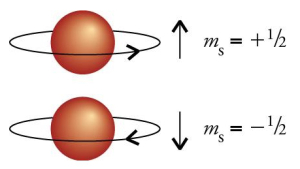 is physically meaningless! Electrons and elementary particles don't rotate! They can be thought as very tiny balls and so comes the missleading idealization that they can rotate but actually they can't because they must be thought as point-like particles!

The existence of spin angular momentum is inferred from experiments, such as the Stern–Gerlach experiment, in which particles are observed to possess angular momentum that cannot be accounted for by orbital angular momentum alone. Remeber that there is not a classical analogue of the spin and it must be considered as an intrinsic quantum property of matter!

Not the answer you're looking for? Browse other questions tagged quantum-mechanics electromagnetism quantum-spin or ask your own question.

1
Magnitude of spin
0
Is it possible to increase a particle's spin and also increase the magnetic field of that particle?