Does 60kg of fusion fuel produce as much energy as 400 kilotonnes of coal?

Several people, including Fusion for Energy have posted this infographic: 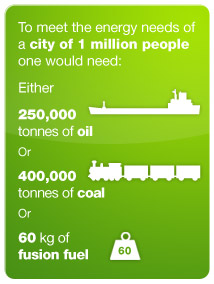 To meet the energy needs of a city of 1 million people one would need:

Ignoring the fact that the info-graphic doesn't include for how long, What I'm asking here is about the rough equality of two energies?

I assume by fusion fuel they mean deuterium/tritium.

Yes. See for example this table of energy densities.

Of course, both the coal and the (as-of-yet hypothetical) fusion plant will have inefficiencies that prevent us from extracting 100% of this energy.

The 340,000,000 MJ/kg number can be calculated from the energy released in a single deuterium-tritium reaction, see for example here.

TL;DR: In theory, yes. In practice, with currently built technology, no.

As already posted the fusion reaction produces more energy from the 60 kg of deuterium/tritium mix than burning 400,000,000 kg of coal does. This comparison is probably the basis for the claim.

The problem comes in two parts. First, to utilize that power, we have to convert it from a fusion reaction to something else, e.g. electricity. We have a basic plan for that. As we do with coal, we'll create heat and then use the heat to power a steam turbine. Given heat, the problem is basically the same.

The greater problem is that a fusion reaction requires a lot of energy to start and maintain. In the sun, part of that energy comes in the form of heat that is a side effect of the fusion reactions already occurring. Another part of that energy comes from gravity. Because the sun is so huge, it pulls things together so much that they fuse. On the Earth, we couldn't do that. So instead, we use magnets to push things together and simulate what gravity does in the sun.

Unfortunately, the Tokamak version is not that efficient. In fact, the most efficient it has ever been is 65% of the energy needed to keep it going. So we might burn 60 kg of fusion fuel, but it would take something like 250 kilotons of coal to do it. And that just gets us to parity. I.e. zero output. And that takes the 65% number as gospel. But some dispute it, arguing that the real efficiency was more like 2% or even 1%.

It's possible that a larger version would be able to produce a net output once started. Popular Science quotes Steve Cowley, director of the Culham Centre for Fusion Energy:

"For $20 billion in cash," he says, "I could build you a working reactor. It would be big, and maybe not very reliable, but 25 years ago we didn't even know if we'd be able to make fusion work. Now, the only question is whether we'll be able to make it affordable."

And of course, even if we built a $22 billion fusion reactor, we don't know what the efficiency would be. We can sort of guess, but we don't actually know. That's part of the point behind building the prototype: to find out how it performs in reality rather than in theoretical models. Perhaps it will produce more energy than is put into it. Or perhaps we will discover that practical fusion is still at least 30 years away.

This depends entirely on what you mean by "energy equivalent." If you're talking about the amount of the fuel that would be needed to provide a given amount of electrical power with current technology, then the answer is no, they are not equivalent. Given the infographic's discussion of "powering a city," it is suggesting this interpretation, as this is the only meaningful interpretation for how a city might be powered.

On the other hand, if you're merely asking about how much energy we can get out of the fuel if we don't care about things like, say, destroying the city in which the reaction takes place or getting any useful electrical power from the reaction, the amount of energy is actually underestimated a bit for the fusion, though the order of magnitude is accurate. So, if you're more concerned with destroying a city than with powering it, fusion is a great choice.

Theoretically speaking, fusion power production would be great. There's lots of fuel available, the energy density is greater than even nuclear fission, and it doesn't produce as much radioactive waste. Unfortunately, however, as of 2017, despite about 6-7 decades of research, no one has yet been able to build a nuclear fusion reactor that produces positive net energy.

The reason for this is that fusion reactions generally require very large amounts of input energy both to create the plasma stream and to contain it. Lots of various designs have been proposed and/or tried in order to increase the ratio of produced power to input power, but, to date, none have reached a ratio of 1 or more, thus, all have produced negative net energy. Obviously, this is not very helpful when attempting to power a city. The infographic is being quite misleading by leaving out this little detail.

Of course, this is not to suggest that further research will not eventually create a fusion reactor that produces positive net energy. It's entirely possible (and, IMO, likely) that we'll eventually have a working design. But we've currently been unable to demonstrate a working prototype, so it's not a matter of just building a bunch of fusion plants today.

The Specific Energy of a fuel is its ratio of stored energy to mass, without any regard to how much external energy may be required to actually do something productive with the fuel.

Wikipedia lists the specific energies for many fuels in megajoules (MJ) of energy per kilogram (kg) of fuel mass:

The massive specific energy of fusion fuels is what allows us to construct fusion-based bombs. In the case of a bomb controlling and containing the reaction aren't primary concerns, since the whole point is to destroy everything nearby anyway in most cases. However, we unfortunately can't ignore those things when building a power plant.

tl;dr The infographic is more or less correct about the ratio of specific energies, but is incorrect in suggesting that we could use those amounts of fuel to actually provide electrical power to an equivalent market with present-day technology.

Depends on the efficiency of the nuclear reactor in question, as well as the efficiency of the method used to extract said energy. Since the only nuclear fusion reactor that produces more energy that it takes in that we currently have access to is the Sun, and the Earth as a whole only receives 1 x 10^-9 of the Sun's radiated energy according to a page hosted by the University of Illinois (http://extension.illinois.edu/world/energy.cfm), and since according to Wikipedia, the Sun is currently fusing 620 million tons of hydrogen in its core each second, that means that about the energy of about 562 kilograms of fuel reaches the Earth each second (https://en.wikipedia.org/wiki/Nuclear_fusion).

Since the Earth receives about 174 petawatts of Solar energy each second according to wikipedia (https://en.wikipedia.org/wiki/Solar_energy), we can work out that the energy per kilogram of the Sun's fuel is 3.058 x 10^8 J/kg. So, multiply that by 60 to get the energy in 60 kg of nuclear fuel. However, since we only receive one billionth of that energy, we're only getting .3058 J/kg. Multiply that by 60 kg, and you get 18.35 J. That's not very much; approximately enough to life a bag of 18 apples one meter, and that's without taking the inefficiencies involved in converting solar energy into something useful.

Not the answer you're looking for? Browse other questions tagged homework-and-exercises mass-energy estimation fusion or ask your own question.

16
Where does the energy produced by fusion come from?
2
How much potential fusion energy is in Earth's ocean?
1
So how much fuel does a hypothetical fusion plant need?
3
How much energy does proton - carbon 12 fusion produce?
1
Why does fusion use mass for energy?
0
Why does fusion above nickel 56 require energy?
0
Does the speed of light determine the energy released in fusion reactions?
21
How do stars produce energy if fusion reactions are not viable for us?