Theoretically, from Newton's equation for the force between two bodies if we take two ordinary rings in a distance there will be a force according to the square inverse law of their distance (from their mass center) such as case 1 from the below picture. If i place their mass center so as to coincide (case 2) the Force will be infinite, although they can separate from each other with a small force. What's wrong with that supposition? 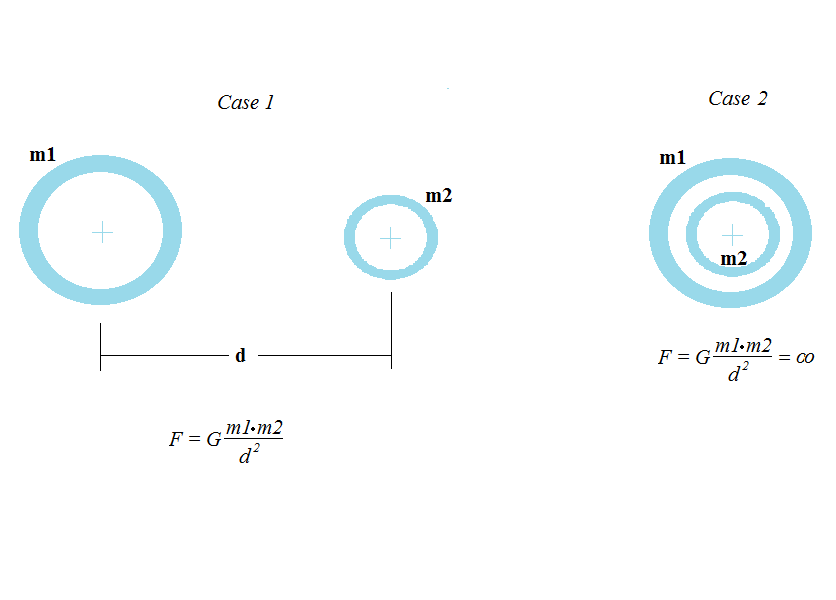 First, in principle Newton's law of gravitation holds for two POINT PARTICLES only.

For rings, there is not a theorem as you stated: "....there will be a force according to the square inverse law of their distance (from their mass center)..."

If instead of two circular rings you used two spherical shells, one inside the other, the resultant gravitational force between them would be zero. This is a consequence of Newton's Shell Theorem. This result is the same whether or not the centres of the two spherical shells coincide. The inner mass does not even have to be spherically symmetric - any shape will do. The only requirements are that the inner mass is completely inside the outer mass, and the outer mass is spherically symmetric.

This works for a sphere because the geometry of 3D space matches the $1/r^2$ nature of gravity. It does not work for a ring because the ring is 2D so it cannot be spherically symmetric. It would work for a 2D ring if gravity were a $1/r$ force instead of $1/r^2$. Then any mass of any 2D shape would experience no resultant gravitational attraction from the outer ring (provided that it remained in the same plane aas the ring). See Gravitational field of thin 2D ring - numerical simulation.

Not the answer you're looking for? Browse other questions tagged forces newtonian-gravity symmetry or ask your own question.

6
Gravitational field of thin 2D ring - numerical simulation
0
Can the gravitational force between a 2D ellipse and a point mass in 3D space be found using the centre of mass of the ellipse?

2
Force inversely proportional to the squared distance
11
Gravitation law paradox for very close objects?
6
What is the connection between Newton's Shell Theorem and Bertrand's Theorem?
2
Infinite force in Newton's law of gravitation
10
What does it mean for the gravitational force to be "between" two bodies?