I believe you're referring to the embarrassing problem that measurements of the neutron lifetime made with neutron beams have in recent decades given systematically longer lifetimes than measurements made with ultracold neutrons trapped in bottles: 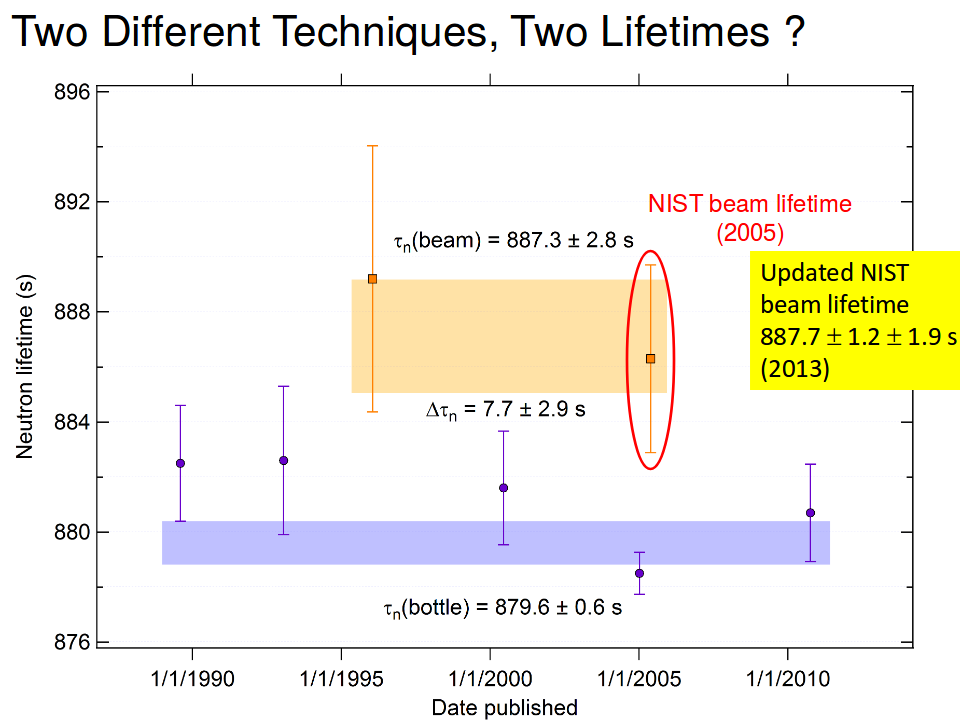 Your idea is reasonable: since the beam neutrons are moving faster, perhaps time dilation plays a role. But the math doesn't work out. The modern beam measurements are made with thermal or cold neutron beams. A thermal neutron is drawn from an an ensemble with temperature $T\approx 300\rm\,K$, and the equipartition theorem tells us that such neutrons will typically have $kT \approx \frac12 mv^2$ --- that corresponds to a speed of about $v\approx 2000\,\mathrm{m/s} \approx 10^{-5}c$. But that gives a relativistic factor of

The ratio of the lifetimes from the two types of measurements is $$ \frac{887\rm\,s}{880\rm\,s} \approx 1.008 $$ which is different from one in the fourth significant figure, rather than the tenth significant figure. The relativistic correction isn't large enough to explain the discrepancy.

(This argument is still sound if you're not sloppy with factors of two.)

You mention in a comment that you learned about this discrepancy from this Scientific American news story. If you'd like more technical information you might read this feature article in the same magazine, or this academic review article which I think probably precipitated both of the Scientific American stories.

So if you observe the moving particle to have a lower life expectancy than the one at rest that must be for some other reasons than time dilation.

To expand on @СимонТыран's answer, the fact that muons reach Earth's surface at all was one of the early forms of evidence for special relativity. The mean life of the muon is about 2 microseconds. In that time, a muon could travel only about 600 meters, at the speed of light. Since muons are produced thousands of meters up, only a tiny fraction should be able to reach the ground. What we observe is not consistent with that, and can only happen if the mean life is a rest frame phenomenon and the high energy muons gets extended by time dilation. For more details, see Wikipedia's article and the Hyperphysics article.

Not the answer you're looking for? Browse other questions tagged particle-physics relativity neutrons or ask your own question.

2
Experiment - does mass of a moving body really increase or is it invariant?

1
Radiation distribution in subcritical core after meltdown?
0
Neutron decay discrepancy
13
Will a free neutron radiate if it is decelerated?
5
How do neutron stars emit black body radiation?
1
Why does the neutron have an electric dipole moment?