Ask Question
Asked 3 years, 11 months ago
Active 2 years, 11 months ago
Viewed 250 times
-1
$\begingroup$
This question already has answers here:
Where does the extra kinetic energy of the rocket come from? (4 answers)
Is kinetic energy a relative quantity? Will it make inconsistent equations when applying it to the conservation of energy equations? [duplicate] (3 answers)
Closed 3 years ago.

Imagine two objects of mass $m$ each (both of them in outer space), with initial velocities $v_0$ and $0$. Now I apply a constant force $F$ on both of them for time $t$. Now the change in energies of the masses are $$\Delta E_1=m v_0\Delta v + \frac{1}{2}m\Delta v^2$$ $$\Delta E_2=\frac{1}{2}m\Delta v^2$$ What these equations are saying is that I lose more energy when I try to accelerate an already moving object (same amount of momentum transfer doesn't mean same amount of energy transfer). This doesn't make sense. If I look at it mathematically, i.e $dW = \vec{F} \cdot \vec{ds}$, I completely understand why I'll have to spend more energy on the moving object. But for some reason my intuition says if I apply same force on objects moving at different velocity for the same amount of time, I'll lose the same amount of calories. Where is my intuition wrong?

However in general you shouldn't think about work as 'burning calories' because human muscles behave in weird ways. In this example you would get tired even with zero initial velocity, despite doing exactly zero work. A better example is a weight on a cable: it can hang forever without requiring energy, but it needs a motor to raise the weight up.

Forget about burning calories as you are then dealing with a very complex system (your body) which which convert chemical energy from your food which will not result in a change in the kinetic energy of the ball which you are holding still at arms length ie as far the ball is concerned you are not doing any work on it.

Since the force $F$ is constant the velocity against time graph for your object will be a straight line. 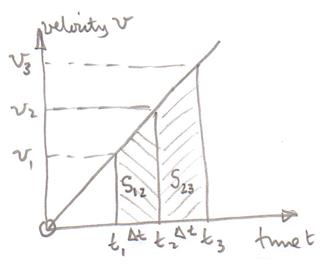 Since the acceleration is constant then in equal increments of time the increase in velocity is the same $v_3-v_2=v_2-v_1$.

The distance travelled by the object in these equal increments in time is the area under a velocity time graph $s_{12}$ and $s_{23}$.

So the work done by the force in these increments of time is $F\,s_{12}$ and $F \, s_{23}$ and this is equal to the change in kinetic energy of the object in these intervals of time.

Since $s_{12} <s_{23}$ the increase in kinetic energy will be greater the higher the velocity of the object.

Not the answer you're looking for? Browse other questions tagged newtonian-mechanics energy momentum work inertial-frames or ask your own question.

34
Where does the extra kinetic energy of the rocket come from?
24
Is kinetic energy a relative quantity? Will it make inconsistent equations when applying it to the conservation of energy equations?

3
How to calculate wasted energy
4
Estimate for energy dissipated by a damper/dashpot
1
Is energy related to work or is it an entirely different thing?
0
Problem with variation of velocity, doubt on the work energy theorem
2
Two identical disks pulled differently question (Kinetic Energy)
50
What is behind the definitions of work and energy?
0
Why is kinetic energy not conserved during an inelastic collison?
0
Same energies are transferred to 2 objects. But they gain different amounts of energy. Where is the mistake?
0
The energy spent when pushing a non-moving object versus pushing a moving object with the same effort