According to the equations, $$P=VI =I^2R\,\text{ and voltage } V=IR$$ it seems clear that when the resistance is lower by fixing the voltage at constant, the current is therefore, higher, generating high power. But what confused me was when the resistance is higher by fixing the current at constant, the voltage is therefore, higher, which in turn lead to a higher power as well. Can anyone pull me out of this confusion?

What makes this confusing is that it's not intuitive how to hold current constant. We typically don't think that way. Usually we think in terms of voltages. So one way to think of this is our higher resistance forces the power supply to provide a higher voltage in order to push through the same current. Intuitively, it should make sense that a higher voltage supply can produce higher powers (though you would need the $P=I^2R$ equation to prove it).

You can use metaphors as well. Any metaphor where you can put a load on something works decently well. Take your own body. You can run at a fairly nice pace. The resistance on your body while running is quite low, so it doesn't take much effort. Now add resistance: 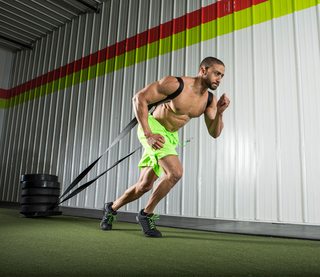 If you run at the same pace (the equivalent of keeping the current the same), you're going to have to push much harder (the equivalent of raising the voltage). And, if you notice, you get hot really fast (power is being dissipated). However, that's only because you kept the current the same. It would also be possible to slack off, not running as hard, in which case you could dissipate less power than before. But your original problem declares that you're keeping the current constant, so you're going to have to work harder and have more power!

Notice that by fixing a constant voltage $V$, we have that the current $I$ is inversly proportional to the resistence by Ohm's Law: $$I\propto\frac{1}{R}$$ So, your first assumption is right, when we set the resistence to be lower the current is higher. When you set a constant current $I$, we have by Ohm's Law:$$V\propto\frac{1}{R}$$ Setting a lower resistance we produce a higher voltage.

Not the answer you're looking for? Browse other questions tagged electricity electric-current electrical-resistance voltage power or ask your own question.

4
What electric potential is found over individual resistors connected in series to an AC power supply?
8
Why high voltage transmission lines?
4
What does it mean when we say that power of a bulb is 10 W? Since $V/I=$ resistance is a constant, how can power $=VI$ be a constant?
5
How power lines use high voltages with a low current?
9
Contradiction in Ohm's Law and relation $P=VI$
4
How should I think about voltage and power?
13
Understanding voltage and power in the fluid analogy for DC circuits
1
When to use Ohm's law as opposed to using power formula?