Take the following gedankenexperiment in which two astronauts meet each other again and again in a perfectly symmetrical setting - a hyperspherical (3-manifold) universe in which the 3 dimensions are curved into the 4. dimension so that they can travel without acceleration in straight opposite directions and yet meet each other time after time.

On the one hand this situation is perfectly symmetrical - even in terms of homotopy and winding number. On the other hand the Lorentz invariance should break down according to GRT, so that one frame is preferred - but which one?

So the question is: Who will be older? And why?

And even if there is one prefered inertial frame - the frame of the other astronaut should be identical with respect to all relevant parameters so that both get older at the same rate. Which again seems to be a violation of SRT in which the other twin seems to be getting older faster/slower...

How should one find out what the preferred frame is when everything is symmetrical - even in terms of GRT?

And if we are back to a situation with a preferred frame: what is the difference to the classical Galilean transform? Don't we get all the problems back that seemed to be solved by RT - e.g. the speed limit of light, because if there was a preferred frame you should be allowed to classically add velocities and therefore also get speeds bigger than c ?!? (I know SRT is only a local theory but I don't understand why the global preferred frame should not 'override' the local one).

Could anyone please enlighten me (please in a not too technical way because otherwise I wouldn't understand!)

EDIT
Because there are still things that are unclear to me I posted a follow-up question: Here

Your question is addressed in the following paper:

Abstract: Twins travelling at constant relative velocity will each see the other's time dilate leading to the apparent paradox that each twin believes the other ages more slowly. In a finite space, the twins can both be on inertial, periodic orbits so that they have the opportunity to compare their ages when their paths cross. As we show, they will agree on their respective ages and avoid the paradox. The resolution relies on the selection of a preferred frame singled out by the topology of the space.

First, let's imagine the ''standard'' twin paradox--you have one observer coinciding with the $y$-axis. The second observer travels out with an angle greater than $45$ degrees, and then has to have a turnaround time, after which they rejoin the $y$ axis and compare ages. The second observer ages less because they travel a path between the two ``meeting'' events that takes less proper time. The non-equivalence of the two paths is forced by the kink. In particular, if you draw equal-interval light rays leaving the non-accelerating observer, you will see how the moving observer suddenly sees them age as they accelerate.

Now, let's imagine the situation you describe--to do this, imagine a paper strip that is infinite int he $y$-direction, and has the topology of the ``asteroids'' game in the $x$-direction. This describes a geometrically flat ring evolving in time (adding more dimensions doesn't change the physical picture for this problem much, but makes the whole thing a lot harder to picture mentally). Our two observers travel out at equal speeds in opposite directions from a common point. They go to the edge of the strip and come out the other end, and meet up in the middle. Who thinks that they're older? No one! The paths obviously have equal proper lengths. How does this match up with their perception of each other? Well, just draw the light rays leaving the two observers on your paper--when they come out the other end, they suddenly see aging in the other observer--the act of going ''around the world'' makes it seem like the apparent age of the other observer is suddenly increasing just enough so that when they sync back up, their ages are equal.

Also, note that you don't really need general relativity here--a cylinder is intrinsically flat (or at least, it can be), and so there is no matter here, and local frames of a size less than the diameter of the universe will be able to map themselves, undistorted, onto ordinary Minkowski space. This is all topology.

In the end, all of this can be worked out, just as I said, by drawing lines on paper, identifying sides with each other, and using the rule $\tau^{2} = t^{2} - x^{2}$, where $x$ is the horizontal 'space' distance traveled, $t$ is the time elapsed in the global frame of the torus (or the preferred frame, if you will), and $\tau$ is the amount of aging of the relevant observer in their frame. All it takes is paper and rulers.

And once you talk about preferred frames, you do violate the spirit of Einstein's postulates. This doesn't mean that you can't talk about things consistently. Special relativity on a torus is still perfectly consistent, it's just not a theory in which all frames are equivalent. Also note that the speed of light limit will still be valid--the underlying local geometry will still be identical to SRT. You just will have differences when observers go 'around the world'. This is the difference between geometry and topology.

The asymmetry comes from the fact that the universe itself has a reference frame, and its size will lorentz contract. This is measurable by the people themselves--all that needs to happen is to send out a light ray and wait for the light ray to go around the world. The 'diameter of the universe' will be (light orbit time)/c. This time will be observed to be smaller the faster the observer is travelling. So all observers will agree that there is a global, absolute notion of motion, and this will pick out who ages when.

If you're worried about the translational invariance, note that you're gluing $x=0$ to $x=L$, but a Lorentz transformation is going to mix space and time coordinates, so to a moving observer, this will be gluing $\frac{x-vt}{\sqrt{1-\frac{v^2}{c^2}}} = 0$ to the same expression equal to $L$, and will involve a mixing of space and time coordinates--the boundaries will appear to move.

This means - even if there is no acceleration - that this case is comparable with two twins, one making a roundtrip and being younger than the remaining twin when returning to Earth. Another comparison: two Earth satellites, one geostationary satellite and one satellite in orbit. The moving satellite will not be submitted to any acceleration of its 1D- (or 2D-) course, but due to gravity it is permanently accelerated perpendicularly in Earth direction (the 3rd dimension). In the same way, the astronaut is not accelerated in 3D-space, but he is following the curvature of the 4th dimension. 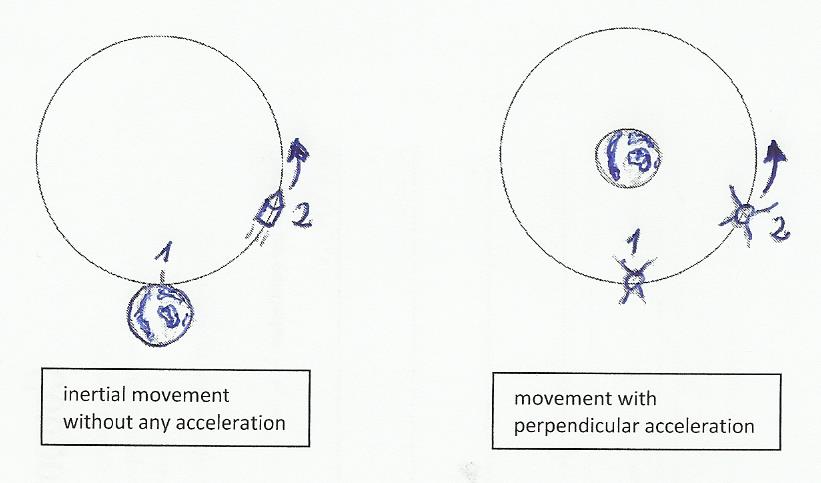 Due to the preponderant impact of the curvature of space in the 4th dimension the current equations regarding the twin paradox are not working and need to be corrected for this special case. There is no acceleration in 3D-space, but the curvature is similar to an acceleration in the fourth dimension (= the dimension in which the 3D-space is curved). The result will be that the traveling astronaut (more exactly: the relative distance between both astronauts) is somehow "accelerated" in the direction of the fourth dimension so that the twin paradox cannot be applied symmetrically, exactly in the same way as for the two satellites.

Not the answer you're looking for? Browse other questions tagged general-relativity special-relativity time or ask your own question.

7
Twin paradox with two intertial frames in general relativity
0
Twin paradox on a cosmic scale
102
What is the proper way to explain the twin paradox?
3
Is General Relativity compatible with relative speeds bigger than $c$ between two inertial frames?
0
Twin paradox comparing with length manipulation