Is there a clear probability density function of the place of the photon on screen, in Young's Double-slit Experiment?

I am a Mathematics student, also interested in Quantum Physics. Recently a question about the Young's Double-Slit Experiment has attracted me in the topic: Is there a closed formula (as a function of $x$, a point on the screen) for the probability of a photon which is passed the slits to hit the screen at $x$ ?

Articles and lessons on the topic suggest this formula $$I=I_{max}\cos^2\left(\frac{\pi d\sin\theta}{\lambda}\right)\left[\frac{\sin(\pi a\sin\theta/\lambda)}{\pi a\sin\theta/\lambda}\right]^2, $$ which is the intensity at point $x$ (with angle $\theta$ from the line of the centers of the slit plane and the screen) according to the intensity at the center of the screen ($I_{max}$). However some of them also declared that it is not complete since it does not include some quantum properties.

Moreover, it seems that this formula can not be a probability density function (pdf) at all, for it is a non-zero continuous (periodic) function that accepts $1$ in its values and its Integral on the whole domain (on the whole screen) is less than $1$. 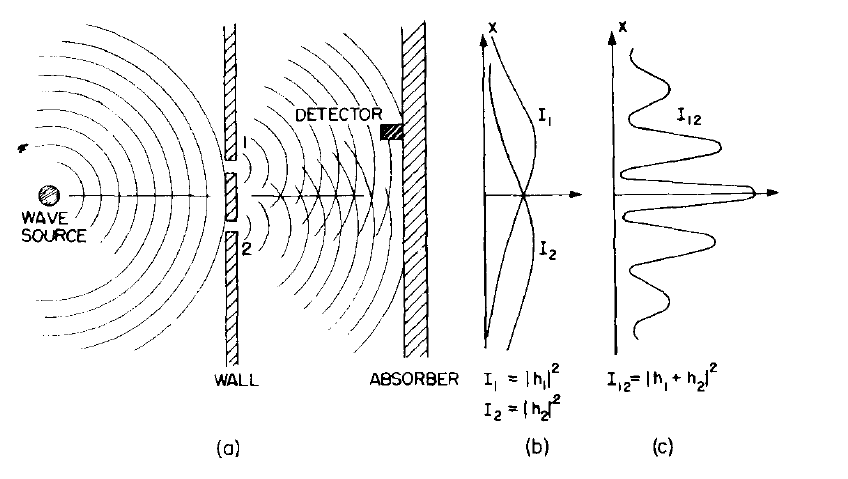 Any comments would also help and be appreciated.

EDIT- The problem of my question is that a pdf CAN take a value greater than or equal to $1$.

The function $I$ can be normalised so that its integral over space (ie the screen) is $1$. It can then represent a probability density function similar to $P_{12}$ .

Not the answer you're looking for? Browse other questions tagged quantum-information double-slit-experiment or ask your own question.