How far from the Sun is a photovoltaic effective?

Just what the title states.

Photovoltaic cells convert incident light to electricity; this probably means they create less electricity when it is dark - as in deep space.

How far can a solar cell be taken from the Sun, and still be effective?

The Juno mission to Jupiter, if successful, will be the furthest that we've managed to get PV work to date. It was launched on 5 August 2011; it is already beyond Mars orbit, and will, all being well, reach Jupiter in July 2016.

There isn't a physics limit to the distance at which photovoltaics work. If a photon of suitable wavelength reaches the PV (and we have every reason to believe that distance in and of itself is no barrier), then the panel can work. As others have noted, for something that's behaving as a point source of light, (e.g. the Sun, when you're far enough away), the amount of energy falls off with the square of the distance, so there are challenges - but these are economic, technical and engineering challenges.

From the literature (see next section), cell efficiencies hold up down to about 1% of daylight levels, which suggests that going to distances ten times further from the sun could be viable. (pausing to note that even when efficiencies hold up, you need 100 times the surface area to capture the same amount of power, when you are ten times further away.)

That was for mono-crystalline cells. Similarly, for organic photovoltaics, Steim et al looked at Organic photovoltaics for low light applications over the same ranges of light levels as Bunea et al, and found reasonably similar levels of stability in efficiency (the green squares in the graphs on the right. NB the x-axis has a log scale) 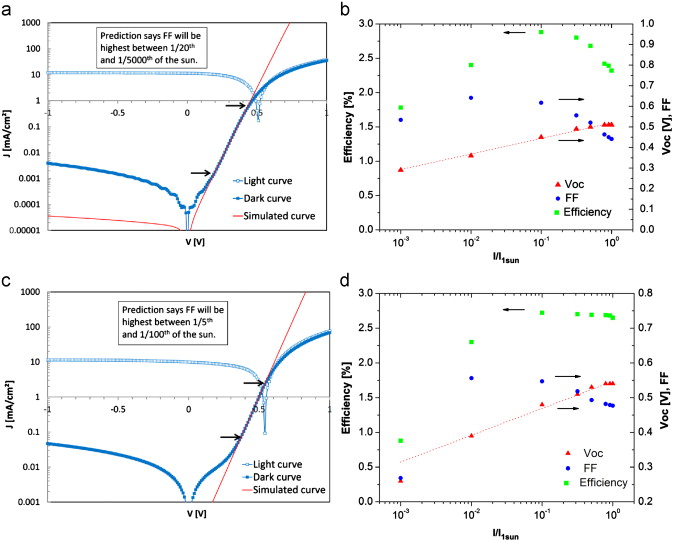 Jupiter’s orbit is five times farther from the Sun than Earth’s, so the giant planet receives 25 times less sunlight than Earth. Juno will be the first solar-powered spacecraft designed by NASA to operate at such a great distance from the sun, thus the surface area of solar panels required to generate adequate power is quite large. Three solar panels extend outward from Juno’s hexagonal body, giving the overall spacecraft a span of about 66 feet (20 meters). The solar panels will remain in sunlight continuously from launch through end of mission, except for a few minutes during the Earth flyby. Before launch, the solar panels will be folded into four-hinged segments so that the spacecraft can fit into the launch vehicle.

Juno benefits from advances in solar cell design with modern cells that are 50 percent more efficient and radiation tolerant than silicon cells available for space missions 20 years ago. The mission’s power needs are modest, with science instruments requiring full power for only about six hours out of each 11-day orbit (during the period near closest approach to the planet). With a mission design that avoids any eclipses by Jupiter, minimizes damaging radiation exposure and allows all science measurements to be taken with the solar panels facing the sun, solar power is a perfect fit for Juno. 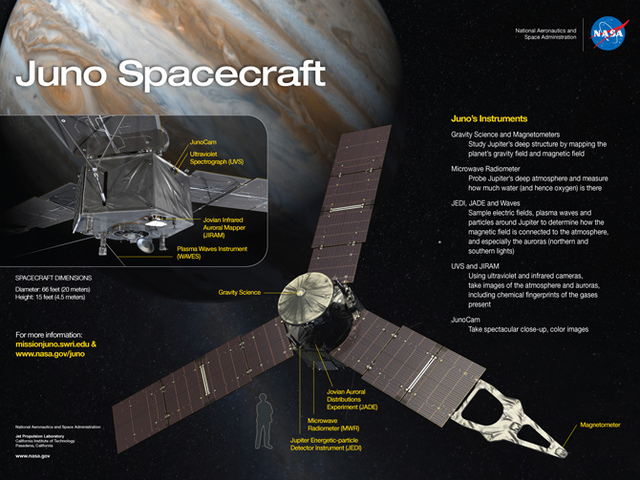 Depends what you mean by "effective". They work quite well at Earth, 150 Million km from the sun.

But because the sun's light (or any light) spreads out into a spherical shell - as you double the distance, you only receive 1/4 as much light. So at the orbit of Mars, around 1.5 times as far from the sun, you get only about 1/2 as much sunlight.

At the orbit of Jupiter, 5x further from the sun than Earth you would only get 1/25 = 4% of the power - which means solar panels are pretty useless less than 1/2 way out of our solar system

Short answer: out to Mars usually, maybe to the asteroid belt depending on mission details, but not Jupiter unless it's an unusually low-powered spacecraft. Forget Saturn and beyond.

PV works great near the Earth, at 1 AU from the Sun, where we receive about 1400 Watts per square meter. (It's more like 1000 on the ground due to our atmosphere in the way.) PV works fine on Mars, as everyone has seen with Spirit and Opportunity, though there was some help from dust devils.

The power flux falls off as the inverse square of the distance. At Saturn, nearly 10AU from the Sun, there's 1/100th power. Fine, if a spacecraft carries solar panels 100 times bigger than would be used near Earth. But bigger panels are heavier, tricker to fold up into launch configuration, and not cost effective in terms of systems engineering.

Jupiter at five AU, or a little more, isn't as bad as Saturn, but it still doesn't work out with current or near future technology, for most missions worth pursuing. The asteroid belt is debatable. Maybe for a spacecraft with just a few simple science sensors, no stringent needs for tight attitude control, no big moving mechanical parts (e.g. robot arms on a rover), modest propulsion and modest data volume - the amount of data to be transmitted to Earth, PV could work as far as Jupiter.

Beyond Mars, PV is more realistic with a flyby mission than with a lander (say on one of Jupiter's moons) because landing would require more energy for the delta vee - to slow down and adjust trajectory to match the target object, to deploy parachutes, retrorockets, or whatever. A flyby just needs to collect data and radio it back to Earth. An example of how different craft at the same distance from the Sun may need different power sources is the MSL (Curiosity) that landed in August 2012, which uses plutonium RTGs. It has a larger and more complex robot arm and more instrumentation than the PV-powered Spirit and Opportunity. Yet all three are on the same planet.

AFIK, the farthest any spacecraft has gone, or will go, using PV power is the Stardust comet sample return mission with six and a half square meters of solar panels (http://stardust.jpl.nasa.gov/tech/misc.html)

But then, professional opinions vary. I'm no spacecraft systems engineer. Ross McCluney, also not a spacecraft engineer but an expert on solar energy, believed that a spacecraft to Saturn could be solar powered, and had caused some controversy prior to the launch of Cassini, an RTG-powered spacecraft. Read http://www.space4peace.org/cassini/solar.htm or http://depletedcranium.com/responding-to-ross-mccluney-comments/ for background. But experienced engineers at JPL are in agreement that it isn't practical to use PV at Saturn.

Not the answer you're looking for? Browse other questions tagged sun renewable-energy solar-cells or ask your own question.

4
We just need a solar panelled SPAIN to power the world?

2
In solar cells, do photons break apart electron-hole pairs, or create them?
4
Is deep-space radiation greater in the Sun, or in the shadow of Earth?
42
How far out from the Sun is visible light still sufficient to read a book?
6
Materials for use in a solar cell
0
Feasibility of silicon heterojunction solar cells in utility scale
8
How do neutrinos pass through the sun so quickly?
63
Why don't solar panels contribute to global warming?
8
What kind of engine is a photovoltaic solar cell?
3
Does the albedo of a photovoltaic cell correlate with its load?