Intuitive Cause for End Corrections

I have looked for an intuitive description for the reasons for end corrections. I find most of them with mathematics far beyond my level (high school). I found two sites that attempted to explain it, quite unsatisfactorily in my opinion. Yes, I have seen the other 2 answered replies on this site that are related to this topic.

The former attempts to explain it (to my understanding) as: each wave that passes the opening must vibrate masses outside the pipe, and thus the pipe does work on it and therefore lowers the frequency. I have a few issues with this.

"When the pipe is speaking, its internal air column supports periodic (cyclically repeating) pressure pulses travelling up and down as described elsewhere on this website [9]. At the top and mouth they are partly reflected back into the pipe to maintain its speech, but they also partly push and pull on the air in the surrounding atmosphere much as does a loudspeaker cone. Therefore the pipe has to do work to shift the volumes of air surrounding its top and mouth and set them into vibration, the energy source for which is the compressed air coming from the organ blower. Just as with the loudspeaker, these moving air masses first of all generate near field sound waves which then become far field waves at a greater distance from the pipe. It is these two air masses at the top and mouth, both of which are in the transition regions between the near and far fields, which are responsible for what we call the end corrections of the pipe. Because the pipe has to set these external masses into vibratory motion, their inertia reduces the frequency (pitch) at which the pipe speaks as one might expect intuitively - whenever one increases the mass of an oscillating system, it oscillates more slowly. The reduction in frequency is a manifestation of the energy which has been extracted from the pipe to launch a sound wave into the surroundings. The pitch reduction has led to the somewhat unfortunate concept of an end correction, suggesting that the pipe is longer than it actually is."

Firstly, why should that mean the frequency is lowered, instead of the amplitude?

Secondly, if the frequency lowers every time the wave passes the open end, why does the frequency of the wave not decay every time and eventually become very low? These issues would disappear if I had a satisfying reason for the extra masses to participate in oscillation, but I cannot find one, aside from the fact that pressure cannot equal zero exactly, or there would be no work. This does not, however, explain why it occurs.

Thirdly, why should vibrating the masses of air be any different to what waves do when they propagate normally? As I understand, the wave simply propagates out of the pipe and diffracts. If something special is occurring when the wave has to vibrate some masses of air, why doesn't it happen all the time?

The latter link first suggests that the reflection does not occur at the exit exactly, since the wave must leave the pipe to create suction and the resulting out of phase wave. Thus, the length of the pipe is slightly larger. This is much more easy to comprehend, but I am not fully convinced.

"The reflection is caused when a pulse of high pressure air gets to the end of the pipe and it spreads out. But what happens exactly at the end? Inside the tube there is a plane wave, and when the wave is radiating externally it is a spherical wave, but between the two there is some complicated geometry. In this phase, the pulse of air is neither in the free, unimpeded air away from the pipe, nor in the tightly constrained environment of the pipe. It is somewhere between the two: unconstrained on one side, but constrained by the pipe on the other. As we explain above, the reflection is caused by suction that results when the momentum of the pulse of air takes it away from the pipe. This suction doesn't appear immediately when the pulse reaches the end of the pipe, but a little later, as it starts to spread out. So the reflection appears to occur slightly beyond the open end of the pipe."

Why should it not occur as it leaves the pipe? Why must it wait to diffract? Is this due to the boundary being vague and smoothed out, as a requirement of the continuity of pressure and velocity, and thus the reflected wave is created further out? As I type this, I feel more convinced than before, but am still not entirely sure. The literature on this is very sparse.

Any response that either addresses these concerns or explains it differently is appreciated.

I agree with you that the quoted explanation is pretty poor, for the reasons you gave. Here's a figure from my own book (free online). 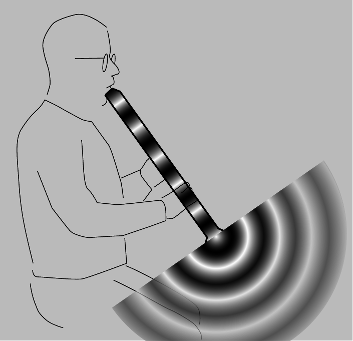 I suppose there are two logical possibilities to start off by considering: (1) the wave is 100% reflected at the mouth of the instrument, or (2) some energy escapes. Possibility 1 is not physical (and is also counter to experience, since we wouldn't be able to hear any sound in the case where the tone holes were all closed). We can say that that's because it's not a solution to the wave equation, but I think a less mathematical argument that works is the following. If that were the case, with the standing-wave pattern inside the tube abruptly ending at a node at the tube's mouth, then it would make no difference if we added more to the length of the tube, because there would be no sound wave outside the tube that would be interacting with the extension of the tube. But in that case, there would be nothing special about the end-point, so it wouldn't make sense to get a reflection.

So we conclude that energy does leak out. Now if the energy does leak out, it must be some kind of spherical wave. One way to see this is that disturbances travel at the speed of sound, so they will reach a point on the outside in a time that is basically $r/v$, where $r$ is the distance from the mouth and $v$ is the speed of sound. We expect the wave pattern to have approximately spherical wavefronts whenever we're at a distance $r$ that is large compared to the size of the instrument's mouth.

Now we get to the real meat of your question. If there were to be no end correction, then the standing wave pattern inside the tube would have to end in a node coinciding with the plane of the mouth of the tube. The spherical pattern would then have to start abruptly at that plane as well, as suggested by the figure. But the point of the figure is that it's clearly unphysical. This abrupt boundary between the plane-wave and spherical-wave behavior, which is obvious on the figure, clearly can't be a solution to the wave equation, because it has discontinuities in it. There has to be a smooth transition from the standing wave inside the tube to the spherical radiation pattern outside the tube. This transition region is the extra length that is accounted for in the end correction.

I guess we could still worry about the possibility that this transition region might lie inside the tube, which would have the effect of shortening the wavelength of the standing wave rather than lengthening it. I think we can again rule this out based on the principle that wave disturbances propagate at no more than the speed of sound. If we make a pulse at the top of the tube, then this pulse clearly can't be reflected before it reaches the mouth of the tube, since then it would be getting affected by regions of space that it has not yet reached. The pulse must therefore do its transitioning on the outside. If this is true for the pulse, then it must be true for other waves, such as periodic waves, because a pulse can be well approximated by a sum of sine waves, through Fourier analysis.

But of those reflections were perfect, no sound would exit the pipe- it would all remain trapped inside the pipe and you would not hear any sound emerging from it.

Not the answer you're looking for? Browse other questions tagged fluid-dynamics waves acoustics boundary-conditions resonance or ask your own question.

3
Standing sound wave in a wind instrument
0
Reflection of Sound wave (Pressure Wave)
0
Why does energy loss cause end corrections?
4
Why, in an open or half-open pipe, must an open end of a standing sound wave have a pressure of zero?
0
Loudspeaker attached to cylinder - closed or open?
2
Why there's a displacement node at the closed end of an organ pipe?