When a 2-jet event occurs due to a quark + antiquark emerging back-to-back, the jets ultimately decay to stable particles. Each jet starts with a quark (or antiquark) carrying a color and ends as a bunch of colorless particles. However, the color charge must be conserved. What is the explanation of the fact that a jet starts with a color and ends up colorless? What is the mechanism of the color charge in this case being "neutralized" or "compensated"? Or is this a wrong way of thinking?

This is a deep question for which we have no precise from-first-principles answer because hadronisation is deep in the non-perturbative regime of QCD where very little can be computed from the Lagrangian. So-called lattice QCD, where the dynamic is discretised on a lattice can compute some observables (the coupling constant, masses of heavy-light mesons, some meson decay constants, to name just a few) but it is hopelessly unable to predict the full hadronisation after even the simple $e^+e^-\to q\bar{q}$. So physicists settled for phenomenological models based on principles which qualitatively match QCD, with enough tunable parameters to fit experimental data. The most widespread is the so-called Lund model, a reasonably pedestrian account of which can be found in [1, section 2.4, p 30]. I am now going to cherry-pick the key points, after which I will answer your question.

As the quark and the anti-quark separate, they form a colour dipole: think of an electrical dipole but with the electric charges replaced by colour. There is a big difference though: the potential energy between two charged particles decreases as $1/r$ with the separation $r$ whereas it increases as $r$ for a colour dipole: this has been convincingly demonstrated by Lattice QCD. Hence the key premise of the Lund model: a so-called colour flux tube (the moniker "string" is often used, for its brevity, I guess, which I will do in the following) is stretched between $q$ and $\bar{q}$ and the equations are tuned so as to hold an energy density of 1 GeV/fm, where the exact value is deduced from hadron spectroscopy. It may be obvious but this colour string stems from the gluon field of course. As the energy of the colour string increases, the probability that a new $q'\bar{q}'$ pair is produced increases. When this happens, the colour string breaks, with $q$ and $\bar{q}'$ connected by a colour string whereas $q'$ and $\bar{q}$ are connected by another one. The process is then iteratively repeated: each of those two new strings stretches, get a probability to generate new quark-antiquark pairs, and eventually we end up with a bunch of hadrons, even though I haven't explained how to get baryons (I haven't really explained what is this mysterious colour flux tube either).

Since your comments made it clear my explanations were too vague, here is an illustrative diagram showing a couple of early fragmentations. The numbers 1,2, and 3 in circles convey time ordering. In step 1, we have the initially produced $q$ and $\bar{q}$ stretching the colour string between them. At step 2, two $q\bar{q}$ pairs have been produced. For each pair, one member forms a meson with the initial quark or antiquark, leaving one lone quark and one lone antiquark between which the colour string is still stretched. The arrows illustrate momentum: this is not important for your question but I am reusing a diagram I made a long time ago. See the appendix if you are interested. Finally, step 3 is much of the same. I emphasise this is only illustrative: the Lund fragmentation model does not enforce the fragmentation to proceed exactly as stated. But what is the end game then? At some point there will be a colour string stretched between a $q$ and a $\bar{q}$ produced by a previous fragmentation and there will not be enough energy left to stretch the string to create new particles and they will settle into a meson, ending the process: the string wins! 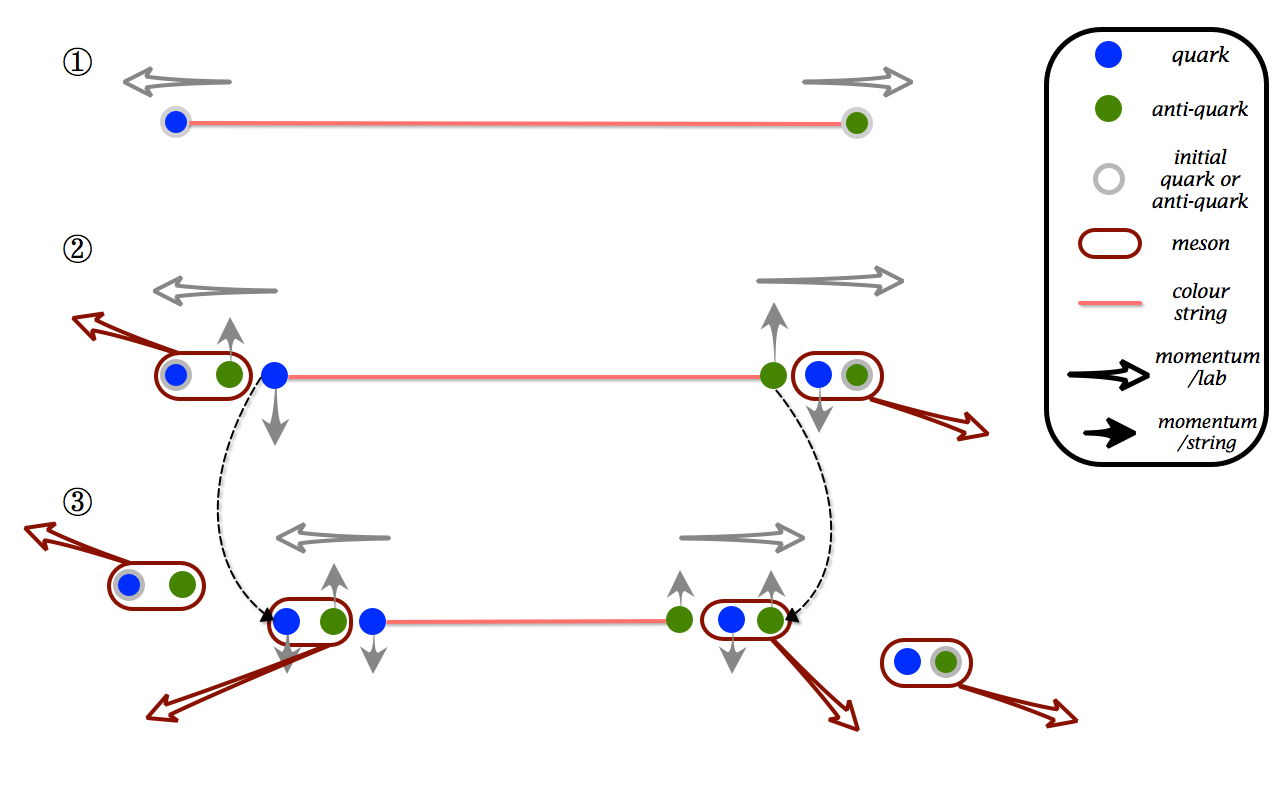 There would be tons more to say on the Lund model, but I'll let you read the reference I gave, and finally move on to actually answer your question!

The answer is almost trivial: the colour strings in the Lund model carry colour charge, because gluons do. This is the other key difference with electromagnetic dipoles: the electromagnetic field does not carry a charge, and therefore photons do not directly interact with each others (no photon-photon-X vertex in Feynman diagrams). On the contrary, gluons do carry a colour charge, since they do directly interact (there are $ggg$ and $gggg$ vertices in Feynman diagrams). If you consider the $q\bar{q}$ initial pair and the colour string stretch between them, that whole system is colourless but, more to the point of your question, then at any stage of the Lund fragmentation process the pictures repeat itself, as the created quark-antiquark plus the new colour string between them do also make a colourless system. So colourlessness is conserved iteratively in that manner in the Lund model. Again, this is just a phenomenological model: we do not know whether it is actually a fair depiction of low-energy QCD. But there must be something right with it because it has been predicting extremely well the hadronisation at every high energy experiment for the last 25 years. Fair enough with a number of tunable parameters scoring in the 100's but the richness of the final states it manages to predict so well has a count at least one order of magnitude larger.

The grey momentum arrows on the diagram show that the $q$ and $\bar{q}$ of a pair produced from the energy of the string are created with opposed momenta, perpendicular to the string. They both have part of the momentum of the initial quarks and antiquarks of course (hollowed arrows). This is why the formed mesons are emitted in a direction making a slight angle from the momentum of the initial quarks.

Interesting non-trivial question but I'm not sure if anybody knows exactly how we always end up with color-neutral objects. I guess you never have back-to-back jet if you are not coliding high energy hadrons. Thus you always have a medium full of quarks and gluons that will eventualy hadronize when cooling down. Either an antiquark come from that medium to compensate the jet from the quark or the propagation from the jet is creating surrounding pairs of quarks-antiquarks and low energy gluons to create a chain of interactions in order to get a colorless particle. Here is a model at Frankfurt university where they study dynamical approach of protons and nucleus interactions.
https://fias.uni-frankfurt.de/~phsd-project/PHSD/index2.html

It can also been studied with event generator such as Pythia or Epos https://en.wikipedia.org/wiki/Event_generator

Not the answer you're looking for? Browse other questions tagged quantum-chromodynamics quarks color-charge or ask your own question.

6
Does the color of a quark matter in a meson?
13
What IS Color Charge?
0
Color factor for squark-quark-antiquark vertex
4
How does quark color affect the identity of a hadron?
4
What's the difference between Quark Colors and Quark Flavours?
26
How (or when) do gluons change the color of a quark?
2
$SU(3)$ Color Symmetry
3
Quark-Gluon color relationship in pure QCD
5
Do hadrons have color moments?