Is this assertion about chains in tension correct?

I have a question about a statement made recently by Neil deGrasse Tyson about chains in tension (contains spoilers for Game of Thrones season 7 finale): 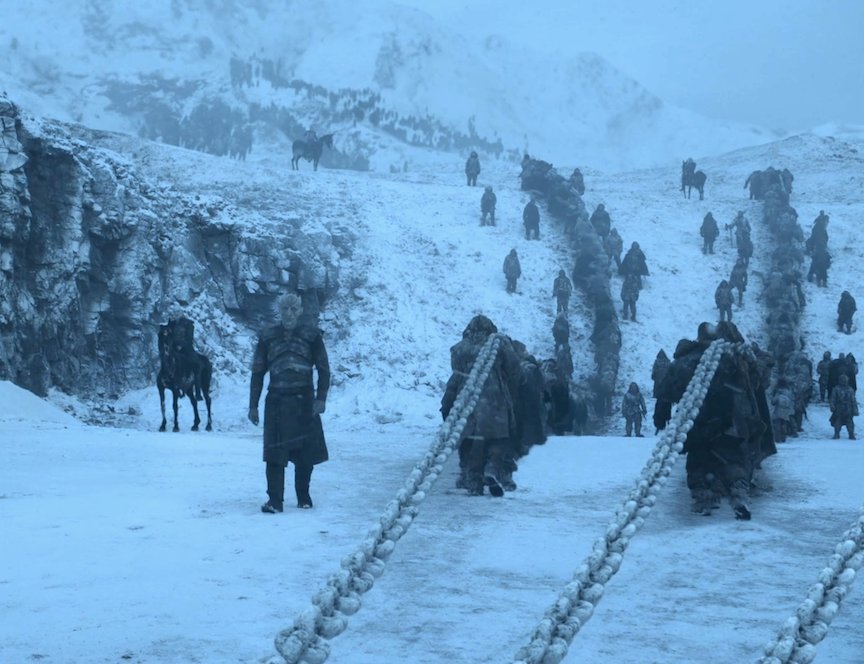 Bad Physics in #GameOfThrones: Pulling a dragon out of a lake? Chains need to be straight, and not curve over hill and dale. (@neiltyson, 24 Sep 2017.)

Tyson seems to suggest that in order for an object to be pulled, that the multiple people pulling at the rope must be on a straight plane. Why? Obviously if there were one puller, at the very end of the rope, a rope curving across the land wouldn't make sense, because generally speaking, it would indicate that the rope was not taut.

But if you have many pullers at each step, then as long as the next puller is still applying a force vector partially in the $x$ direction, wont there still be a net increase in force? Obviously the $y$ component of force added will be a waste, and the puller behind will have to compensate either for additional downward force on the chain, or will have to hold the chain down to prevent the the additional upward force from pulling it up off their shoulder (depending on whether the puller in front is above or below them), but as long as they're not completely orthogonal, isn't this still physically possible?

If so, then wouldn't the given image make sense? Forgive me for any glaring oversights, I'm not very versed in physics.

So the claim is that the waterlogged dragon requires very high forces to drag out of the mud--much higher than the weight forces on the undead army and chains which are doing the pulling: 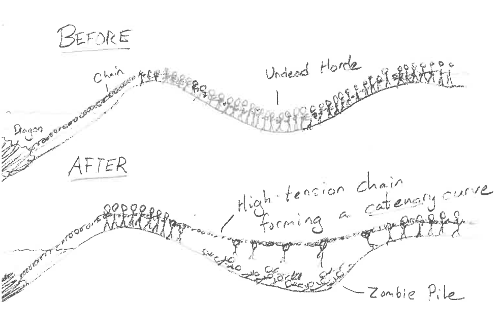 Before the undead horde begins pulling in earnest, there is nothing wrong with the chain and the horde sloping gently with the hills. However afterwards, a chain in tension will form a curve that we call a catenary, with the tension on the sides determined entirely by this combination of the curvature of the chain and the weight per unit length: the requirement that the undead horde remain on the ground becomes a claim about the tension on the chain that they're pulling relative to the curvature of the ground and the weight of the horde and chain.

Neil is making an educated guess comparing these different effects: the hills appear to have been chosen for their very sharp slopes and curvature, the undead horde that is pulling clearly looks like an endlessly long chain gang providing an extremely high tension. But, Neil is saying, this tension does not seem to be evident in the chain itself, which would simply have gone from hilltop to hilltop if the tension were as high as we are being led to believe it is.

Obviously this probably was a real prop chain being pulled by real actors; there is nothing in the laws of physics which prevents the chain from rolling over the hills: but Neil is saying that you can see the tension in the chain from the fact that it slopes over these sharp hills, and that amount of tension is at odds with claim that we need the vast hordes to pull out this dragon. If those hordes were each pulling in earnest, the chain would grow taut and would abandon all of the wights in the valley. Either each wight is pulling a lot less than we're expecting, or the chain gang is nowhere near as large as we are led to believe.

Tie a string to a chair. If the string is curved, additional tension/pulling will only serve to lift it. Only when the string is tight will the force be transmitted to the chair.

That is a picture of actors carrying a heavy chain across a field, not pulling anything of any mass.

I assume the load has high mass because it is large and, as we saw, denser than water. The chain is also dense and heavy, but much smaller in volume.

Even if I connect a bike chain to my chair (and lie it flat so it cannot tip), it still feels likely the bicycle chain will need to be almost straight before the chair begins to move.

How about a motorbike chain - now this is as heavier than the chair, I think the result would be different. That doesn't really match the scenario in question, though.

Also I felt it was not the first disappointingly predictable plot move this season. Season seems a bit rushed, sadly.

I found a physicist who had the same issue and had done the math. I looked over it and didnt see any errors.

Am answering this one as Tyson being wrong about it being "bad physics". If someone finds an error in the math or something I will change my answer.

I tend to agree with Tyson that the physics of the situation is a bit wonky, but I feel he's rather overpushing the point. His assertion, paraphrased as

Have a chain in tension? Chains need to be straight, and not curve either up or down

is plain and simply wrong. Here, have an example: 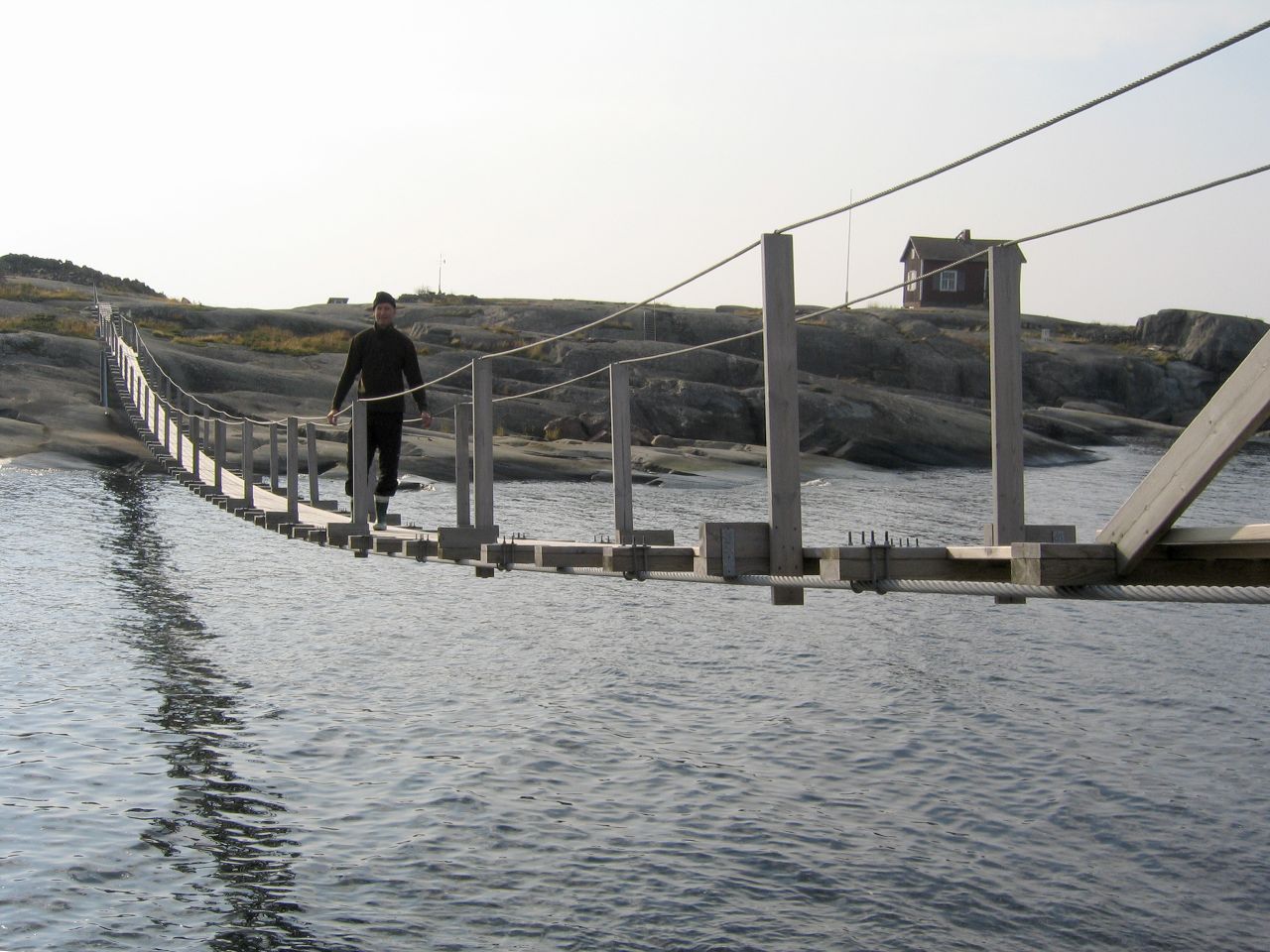 That's a suspension bridge under tension, and if you so wanted you could attach one of the ends to a chain, put it over a pulley, and use it to pull things. Here the weight of the bridge bends the suspended line down from a fully straight line, but it has a minor effect, if any, on the tension carried at the ends. As for curving down, that's what pulleys are for.

Now, is this applicable to Tyson's image? Well, maybe, maybe not. The people at the top of the hill are working as pulleys, which means that on top of providing some of the lateral tension, they're also carrying a substantial amount of vertical force, to an extent that I don't think is 'realistic' (whatever that means in that context). More importantly, this suggests that the weight of the length of chain between the two hills is comparable to the load. Which it might or might not be.

If I were overseeing this effort, I would put the pulling teams on the tops of the hills and try and get the chains taut between them. However, that doesn't mean that the situation depicted is physically impossible in the way that Tyson implies.

Not the answer you're looking for? Browse other questions tagged classical-mechanics forces or ask your own question.

0
Is this a correct interpretation of pressure?
1
Is cause of this equilibrium - tension or friction?
0
Is this the correct way to think about why static friction is directed radially during a turn on a level surface?
0
Question about tension?
0
Tension about disk
1
About working of tension force
0
About the discontinuity of tension