Would a projectile (arrow, bullet) with holes drilled in its length be faster and have greater range?

If any arrow tip or the round of a gun had holes drilled from the front pointy part through the back would it help? It would be lighter for sure. For an arrow you could just fire a hollow tube with a sharpened front?

I'd think there would be less drag too?

Wouldn't this make the round faster, and make it travel farther? Would it be stable?

Drag will be higher, and the ratio of mass versus drag would become worse on both sides of the fraction.

Drag is caused by friction (and lift creation, but I would consider that to be minor, or we would not talk about projectiles but gliders). Friction is proportional to the dynamic pressure (density times speed squared, divided by two) and surface area. By drilling a hole, you increase surface area! Now some air will flow through the projectile instead of exclusively around it. If the projectile is slender, the hole will be small relative to its length and friction will slow down the air so much that the flow through this pipe-like hole will almost cease. Now the almost-blocked pipe will see a much lower flow speed and, consequently, smaller friction drag.

But still it will be best to avoid any holes at all.

Now Rick has done a simulation on a corner case: A very blunt projectile with a massive hole, moving at a not-really-bullet-like 1 m/s. Now in this case you get decent flow through the center which helps to reduce base drag. In the arrow of your question this will not work because friction losses in the long hole will not allow much mass flow, and base drag will not change much. However, boat tailing the projectile has been proven to be much more effective in reducing base drag.

Actually, it is more likely to increase the relative effect of drag.

The acceleration due to that force on the massive object will be less than for the less massive projectile.

The part where it would get tricky is to consider that you get more acceleration on the less massive object when you launch it as well. The problem is that drag forces scales with velocity squared. Even accounting for the extra acceleration you give the smaller mass, the fact that the drag force is both greater and causes more deceleration means that it is unlikely to be a better projectile.

You can always do the math yourself, it's not too hard as long as you're only finding drag at a point.

There can be a use for hollow rings as projectiles. This dog toy for example.

The usefulness comes from allowed increase in stability. Projectiles are typically stabilized either by spinning them, with fins, or both. Fins work by adding drag to the tail (they get a big boost from the lift ratio but it still adds drag) Spinning doesn't add forward drag, but the rotational motion of the surface is resisted by some rotational drag that will slowly decrease the rate of spin. With lightweight projectiles, this reduction in spin can be the limiting factor for range, as once the spin rate becomes too low, the projectile will become unstable. This can occasionally be seen with flying disks when the beginning of the flight is smooth, but then the disk begins to wobble.

So where hollowing out the center come into play, is that a ring has more rotational inertia than it's solid counterpart. This allows the projectile to spin longer and therefor stay stable longer. This is one reason the aerobie flying disk has more range than a typical flying disk.

From a drag point of view, with two objects of equal volume, both sculpted to reduce drag, but one has an air-path through it, the one without the air-path will always have less drag (as long as they are both stable) This is due to the necessary increase in surface area leading to more skin friction.

However, if you're looking at two objects with the same exterior, then the one with the hole from the front to the back will sometimes have less drag. For example I just ran a quick simulation on two bullet like objects falling through air at 1m/s: 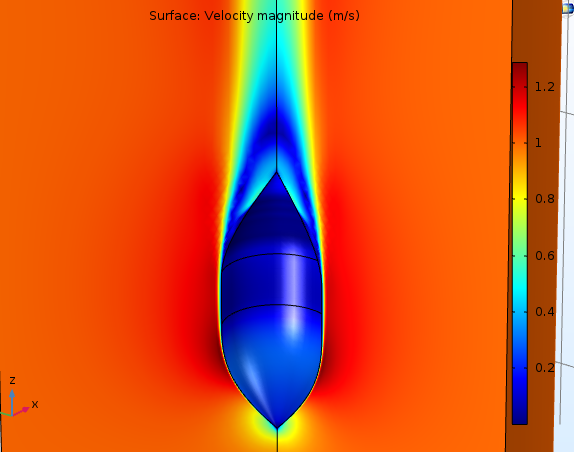 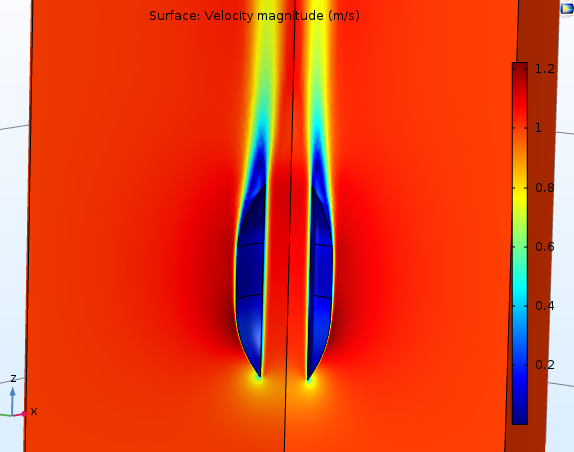 So at first glance it seems like a hole is a good idea. However, the hole also removed mass. That means the same drag will induce a stronger deceleration, so the projectile will actually go slower and have a shorter range.

Additionally for long and narrow geometries (like an arrow) the hole actually makes the drag higher: 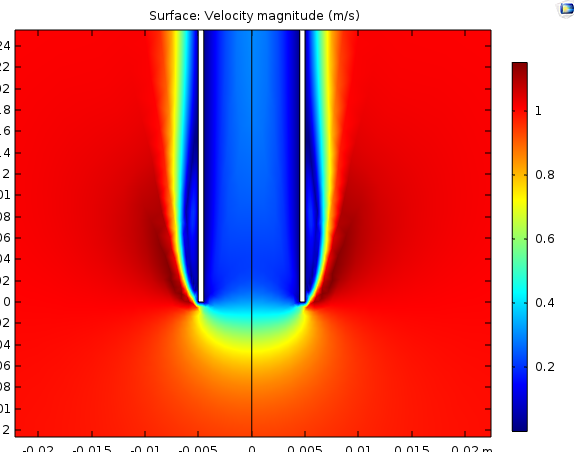 Here the solid 60 cm long 1 cm diameter cylinder had a drag of 0.127 mN. The outside surface of the hollow version had a drag of 0.101 mN but the drag on the inside brought the total up to 0.138 mN for a net increase in drag.

In conclusion a hole can be used to add stability, but in most scenarios it will decrease the speed and range of the projectile even if it manages to decrease drag.

At the turn of the 19/20th century, there were lead bullets with holes through their length, torpedo bullets, and a very small brass or copper rod was inserted through the middle of these projectiles. Tests showed much reduction in drag effect, as the low pressure area at the base of the bullet was greatly reduced by the air flowing through the middle and into the base area.

At the time, the tech was not sufficient to produce these in a highly accurate form, so they never went into regular production. However, on the 1,000 yard line, they were proven to drop and drift less and retain higher velocities when compared to their solid counterparts.

Not the answer you're looking for? Browse other questions tagged fluid-dynamics projectile drag aerodynamics or ask your own question.

13
The Mysterious Reverb in a Jar of Hair Gel