Why don't rockets tip over when they launch?

Rockets separate from the launch pad and supporting structures very early in flight. It seems like they should tip over once that happens.

Nowadays, rockets use a Gimbaled Thrust System. The rocket nozzles are gimbaled (An appliance that allows an object such as a ship's compass, to remain horizontal even as its support tips) so they can vector the thrust to direct the rocket. In a gimbaled thrust system, the exhaust nozzle of the rocket can be swivelled from side to side. As the nozzle is moved, the direction of the thrust is changed relative to the center of gravity of the rocket.

Early rockets had Vernier Thrusters which uses small rocket engines on either sides, to control the attitude (vs altitude) of a rocket. Nowadays, they are common in most satellites. 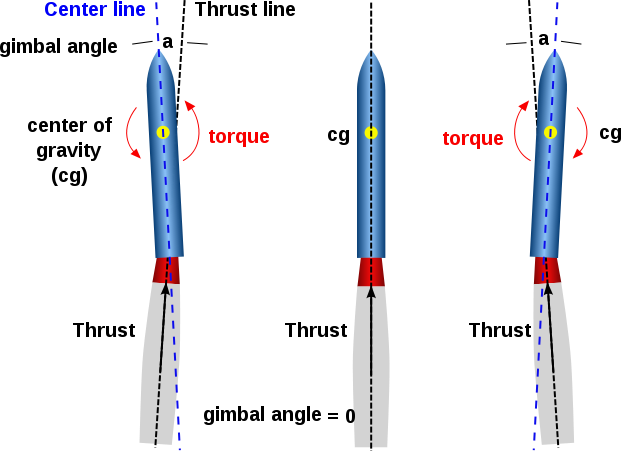 In spacecraft propulsion, rocket engines are generally mounted on a pair of gimbals to allow a single engine to vector thrust about both the pitch and yaw axes; or sometimes just one axis is provided per engine. To control roll, twin engines with differential pitch or yaw control signals are used to provide torque about the vehicle's roll axis.

The right & left gimbaling is necessary to direct the rocket to its original path, thereby maintaining its stability... This link gives a good explanation regarding the stability of rockets. This essay is also good, but it's somewhat big...

More fundamental than the gimballed thrust system or verniers is the relationship between the "center of gravity" and "center of pressure" on a rocket (or any kind of projectile (e.g., bullet).

For the rocket to fly nose-forward and not flip around, the center of gravity must be ahead of the center of pressure. In building small amateur or model rockets, the guideline is always that the CG should be at least 1 body diameter ahead of the CP. 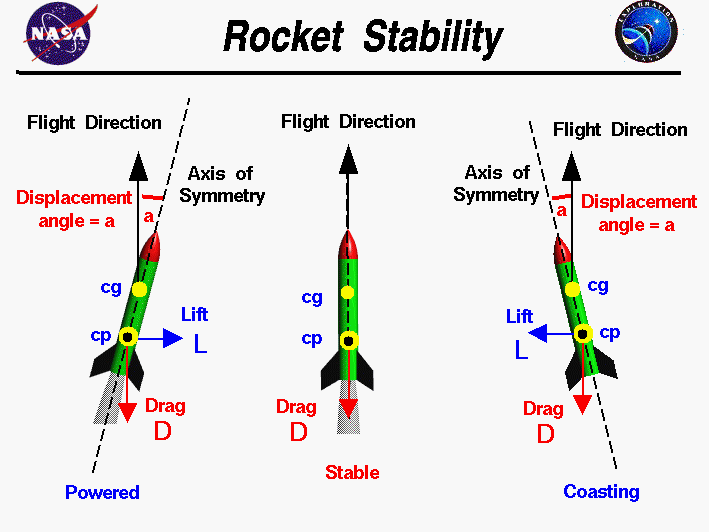 In the above answer about gimballed thrust, for example, the gimbals are actually acting to force the CP back under the CG when the nose tilts. Fins (e.g., on missiles or model rockets) act in the same way to keep the CP under the CG.

So individual technologies for doing that may vary, but the underlying principle here is the CG/CP relationship. Hope that helps.

There are a couple of things at work here.

First - the rotational inertia of the rocket is quite large. That means that if it were to "fall over", it would do so very slowly

Second - it only "falls over" if there ia a torque applied. While it is standing on the launchpad, the center of gravity is between the support points so it doesn't fall; once it's launched, there are three forces at work:

One thing to note - because the torque in (2) is relatively small (small angle ... displacement of line of work relative to center of mass will be small), any "tipping" will happen quite slowly, and the control mechanism has time to respond. This is comparable to the problem of balancing a broom on your hand vs a match stick. The larger size of the broom gives you much more time to react to small angular displacements. In fact, you can consider the system to be not unlike an inverted pendulum for which the typical time constant will be proportional to $\sqrt\frac{\ell}{g}$. So if you can balance a broom that is 1 m tall, it will be 10x easier to balance a rocket that is 100 m (the approximate size of the Saturn V) tall (in terms of time for the control system to react).

4
Why do rockets accelerate fastest horizontally?
10
Why is specific impulse measured in seconds?
5
Why doesn't NASA use RAMJET rockets to get into space?
17
Why do we launch rockets during the day?
4
Why are rockets launched vertically?
18
Why don't humans burn up while parachuting, whereas rockets do on reentry?
1
Why do cylindrical rockets require a roll and pitch maneuver?
1
Do rockets require stabilization so they don't wobble or even spin?