What is the mechanism behind the halo around LED lights?

Was at a musical event last night, outdoors in what might be called a "beer garden", and I noticed that many of the lights in the area were surrounded by a sort of "aura".

The more distant lights (overhead, in a sort of gazebo) appeared to have "spines" of light emitting radially from the light source, creating a fairly complete "halo". (These lamps appeared, based on the color and intensity, to be fairly "standard" clear bulb LED lamps.)

Two closer lamps, which were somewhat different from the others and appeared to be LED "carbon filament" lamps (though I didn't get close enough to tell for sure). These lamps emitted a more interesting pattern, with the spines of light emitting radially from the "tropics" and then curving upward towards the "north pole". (Obstructions/other lights prevented observing the "southern hemisphere" very well.)

What is the mechanism behind these patterns? There are no lenses of any sort, other than the (apparently standard) lamp envelopes. I've seen a sort of moire pattern emanating from fluorescent lamps, presumably due to interference between the distinct color bands those lamps produce. But the radial pattern (especially with curves) produced by the LEDs doesn't seem to fit this explanation.

(I can't find an image that is exactly what I observed, but this one is semi-close: 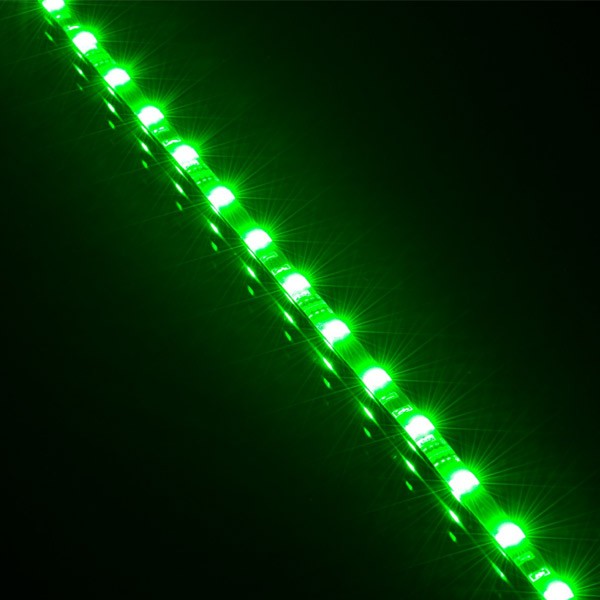 From each individual light in the pictured strip you see maybe two dozen rays emanating outward. The rays that I observed were more distinct and more numerous, and they were much finer. Plus, from the closer lamps they curved.)

Additional info: It should be noted that, of late, there has been a very light haze in the air, due to western fires. The haze is so light as to be unnoticeable except in a few situations.

Also, I've seen the effect before, and it has always appeared to be related LED lights, vs incandescent or fluorescent/discharge style. I suspect that when I've seen it there may have been a light haze/mist.

I believe it is optics of the eye lens to start with:

When looking at a light, a halo is a ring with a visible spectrum. The cause of halos are the fraction of light which goes through the lens, but does not clearly make it all the way to the back of the eye. Light entering the eye gets broken up, causing a kaleidoscope effect. Similar to the effect of a halo around the head of an angel as pictured in artwork, this is the halo one would see when there are issues with the lens of the eye.

It is possible that LEDs may have light polarized differently than other lamps and then the dispersion will be different or stronger, and possibly show rays. This may happen with the lens of the cameras too, imo, better organized than simple lamps .

It can be a symptom of ageing of the lens is what I found when searching for the halos around lights that I now see..

Your glasses are the reason. Your trifocals introduce an abberation, e.g. barrel distortion.

Why don't you see it with incadensent light like standard bulbs? Optical aberrations are wavelength dependant. A curved line will be visible with LED lights. However the effect is smeared out at incadescent lights due to the large spectrum.

Not the answer you're looking for? Browse other questions tagged optics diffraction light-emitting-diodes or ask your own question.

13
What's the origin of the flattened X that appears when of a small (but powerfull enough) light is reflected in our non-powered TV screen?
11
Ruby fluorescence activation spectra
26
Why does light reflected from an LED TV screen make a sharp X pattern?
8
Weird Reflection Pattern in Reading Glasses
0
Why can the source of light affect the occurrence of thin film interference?
6
Why do we need collimated light on a diffraction grating?