Yes, neutrinos "hit" electrons all the time inside the sun, on their way to getting out, which results into the resonant conversion of their flavor, predicated on the changing effective index of refraction. They interact with electrons, and protons, and neutrons, etc... through their favorite interaction, the weak , not electromagnetic interaction. (They can also interact through the puny gravitational interaction, for them.)

They are detected on earth through their (rare) weak interactions with nucleons in the detectors built for that very purpose. Your "head on collision" metaphor would hardly apply for any particle, let alone neutrinos. (For all practical purposes, particles, indeed, never quite hit each other. "Hit each other" is a useful shared metaphor to summarize an interaction, quite well described mathematically by Quantum Field Theory. At some point, taking the metaphor to be more "real" than an informal summary of the math will lead you astray and inflict conceptual casualties.)

In any case, talking about the "size" of neutrinos and electrons makes very little sense. You may wish to think of their inverse mass, their Compton wavelength (which, for the ν, would exceed 0.1 μm ) as some sort of a "size", but you are likely to run into nasty absurdities unless you were very-very careful.

Our mechanical intuition, that things are colliding like snooker balls, exists only in the macro-world. In ordinary matter, there is a

between the particles of the macro-sized bodies.

However, both the neutrino and the electron is charged on the weak interaction, and this may make them interacting. Actually, even neutrino detectors can be built on this principle. This is the Sudbury Neutrino Observatory, and it works partially on this way. 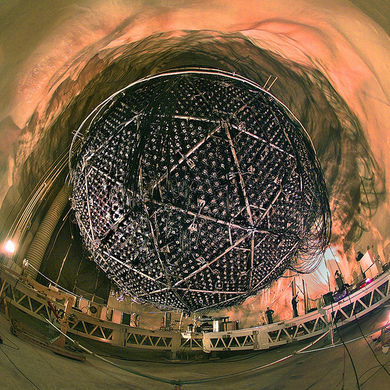 You can find more by googling for "neutral current neutrino detectors".

Not the answer you're looking for? Browse other questions tagged electrons standard-model neutrinos weak-interaction or ask your own question.

113
What is $\Delta t$ in the time-energy uncertainty principle?
131
What does it mean for two objects to "touch"?
40
Why do the neutrinos (with mass) from a supernova arrive before the light (no mass)?

8
What is difference between the different 'flavours' of neutrinos?
5
Could a 4th generation neutrino be a viable candidate for dark matter?
1
Are neutrinos diffused or defracted by the moon?
3
Why only charged particles can emit Cherenkov in glass (and Neutrinos themselves not)
2
How do we exactly use neutrinos to probe the core of the Sun (if they can only interact weakly)?
18
Could Hawking radiation have a lot of neutrinos and dark matter?