From my understanding (likely false), a Newton's Third Law reactive force is the force vector equal in magnitude and opposite in direction of an applied force. In the case of an object undergoing circular motion, the pivot feels an outward force from the orbiting body. If I fire a gun, the force of the shot pushes me back (hence, kick). Cannons have wheels for a reason. My understanding is shown in a graphic I've butchered, but is that of a person punching someone's face, and the respective forces on either as a result: 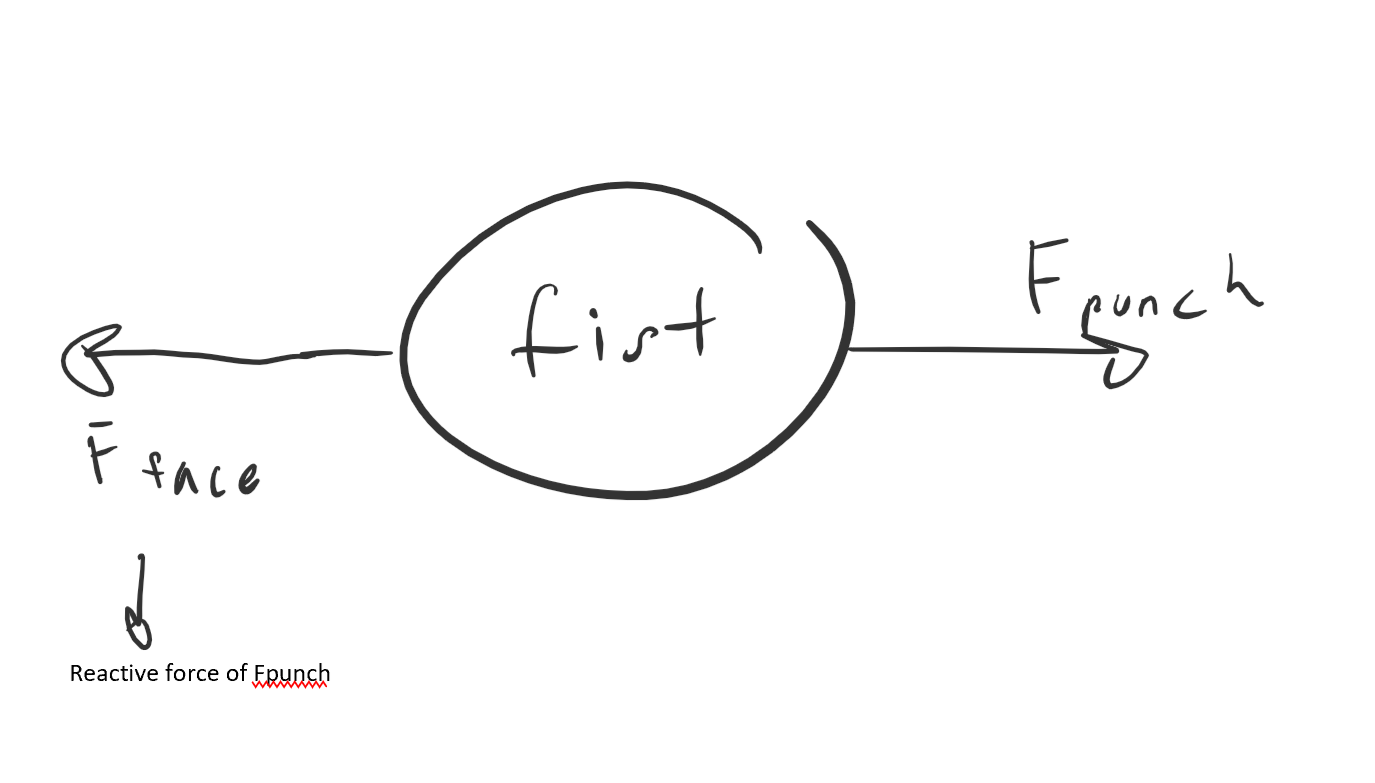 Now, I'm not actually sure if $F_{face}$ is the same as the normal force, but the forces should be balanced, as once contact is made the fist stops moving and experiences shock (in the same way punching a skull can break you hand). The normal force, or, just $F_{face}$ is a reactive force from the face upon the face as a result of the punch itself. That's my view, at least.

This understanding of reactive forces hurts me now, when I consider the following scenario: two objects feeling central forces as a result of eachother (let's let the central force be gravity).

The forces with "R" in front are reactive forces - and I've constructed them out of misguided necessity that I cannot refute rigorously. If $A$ pulls on $B$, then by Newton's Third Law, $B$ must pull on $A$, just as a face strikes a fist as a fist strikes a face. This assertion explains force $RF_{ba}$ on $A$, and the same faulty logic applies to $B$ and $RF_{ab}$. Can someone highlight the key misunderstandings that are causing me to have this odd train of thought?

The force $F_{ba}$ is the reactive force corresponding to $F_{ab}$ and vice versa. The forces you labeled with $R$ do not exist. It is perfectly normal for the forces on a single object to not balance. For example, the forces on $A$ and $B$ could be due to gravity. Both objects feel an unbalanced attractive force and begin to fall towards each other.

1
Does reactive force require the two force involved have to have two different medium for reactive force to occur?
5
Fictitious forces confusion
7
Looking for an intuitive understanding of normal force
7
Do centripetal and reactive centrifugal forces cancel each other out?
39
Apparent Violation of Newton's $3^{\text{rd}}$ Law and the Conservation of Momentum (and Angular Momentum) For a Pair of Charged Particles
15
Newton's Third Law Exceptions?
1
Why is kinetic energy stored as potential energy in a body during its motion against gravity?
0
Why can internal forces be disregarded considering the motion of the center of mass of the system?
0
Orbit with constant central force