Can the complex square of the wave function be interpreted as shape of the particle? [closed]

We know that for wave function of a photon or an electron, the complex square of the wave function is understood as the probability density of finding point like particle in the location. Can anyone remind me why this cannot be explained as the shape of the particle itself? For photon in free space, the ground state is a Gaussian packet, do like the shape of photon itself.

As an example of how difficult this interpretation would be, look at the plot of $\vert \psi_2(x)\vert^2$ for the second excited state of a simple harmonic oscillator. The plot shows several peaks and it is fanciful to conceive of this as a shape of a particle trapped in a harmonic potential: as we change the energy levels of the same particle, the probability distribution changes, implying that the particle itself could have different shapes and increasingly more peaks as we go to higher excitation levels. 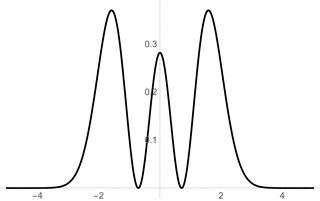 If you want examples involving time-dependent probability densities, remember that it is possible to take linear combinations of solutions (as done in the construction of localized wavepackets), so that pretty much any shape is possible (provided the normalization condition remains).

This interpretation would also be immediately complicated by the simple problem of scattering by a barrier or a well, where the initial localized wavepacket is broken into incoming and reflected waves on one side of the barrier, and a transmitted wave on the other side. A single electron would have to "break up" and be divided in multiple "subelectrons" having fractional charges, something that would violate quantization of charge.

Finally, a quantum harmonic oscillator can approximate the relative motion of two atoms of a diatomic molecule, so again it is difficult to imagine that two atoms could have a shape with three peaks in it, as in the figure.

The wave function is unlimited. There is a non-zero probability of a photon from your flashlight to be detected on Mars, even if you don't point the beam there. In a double-slit experiment, each photon hit is a tiny dot on the film. Therefore, it is reasonable to conclude that the size of the photon somewhat corresponds to a small dot. However, the whole picture of interference lines on the film, while consisting of many small dots, is much larger than any such a dot. This picture corresponds to the complex square of the wave function, but not to the size of the photon.

The interpretation of the wave function as the shape of the particle is not meaningful, because the concepts of wave and particle are different, as is their behavior. The wave passes through both slits at once while the particle can be detected at one slit only.

Experiment discounts such an interpretation. Take, for instance, the measurement of an electron's position in a double slit experiment. The electrons are never "smeared out". They always have a definite location, within the uncertainty of the experimental apparatus (which is completely different from the Heisenberg uncertainty). No "fat" electrons, protons, etc. are ever seen in an experiment designed to measure location.

Not the answer you're looking for? Browse other questions tagged quantum-mechanics wavefunction probability wave-particle-duality born-rule or ask your own question.