I'm a physics tutor for high school students. I'm finding it difficult to teach students how to exploit symmetry while finding equivalent resistance of a given network of resistors. I was Googling but couldn't find any generalized method that is applicable for any circuit with symmetry. The answers to How to find points with same potential while solving an equivalent resistance problem? also say that there isn't a generalized method.

But I found this fantastic course handout of a Microwave Engineering course which tries to define symmetry mathematically using Group theory (I don't know group theory but the handout explained it in such a simple manner that even a lay person could understand).

An example from the slide: 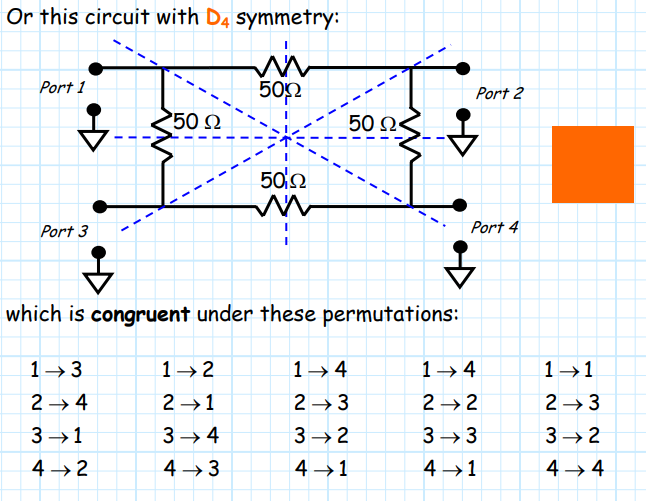 I understood it till the 8th slide. Then it goes on to say:

The importance of this can be seen when considering the scattering matrix, impedance matrix, or admittance matrix of these networks.

Question: How can the concepts developed in this presentation (up to slide 8) can be used for simple resistor circuits involving symmetry and find potentials, currents and equivalent resistances?

To give a sense of the kind of symmetric circuits I'm dealing with, here are few circuits: 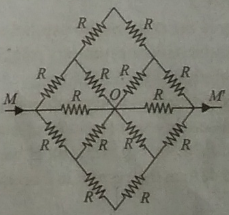 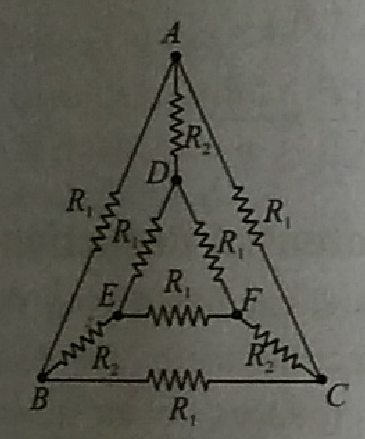 Some background on the handout

The scattering matrix describes how the signal at one port of a multi-port circuit is the linear sum of the signals at the other ports. In general, for a 4 port system you would need a 4x4 matrix, 16 terms. However, when you have (lots of) symmetry, then the number of independent variables quickly goes down.

In its most general form, it would be

And the signal $b_i$ at a given port $i$ that results from inputs $a_j$ at all ports is given by:

(see this link fro a more in depth explanation of S parameters).

As you add symmetry, different terms end up having to have the same values. This simplifies the set of equations you have to solve to come up with the complete "transfer function" describing the behavior of the circuit. In the notes you quote, they claim (without proof) that when you have D4 symmetry, the scattering matrix reduces to 3 independent variables,

One thing about microwave circuits (compared to simple resistor networks) is that you might not even have the most basic symmetry - if you use a circulator network, a signal going into port 1 might appear as an output at port 2, but a signal injected in port 2 might appear on port 3 (and not 1)... because phase shifts across the network play a major role in microwaves. That doesn't happen with a purely resistive network, but it explains why microwave circuits need more advanced analysis techniques. Which are sometimes useful even for "regular" circuit analysis.

All of that is to give you some background on the handout you were looking at. Now let's get back to your original question.

These matrix methods are probably too advanced for your students - although they are likely to do "something like this" without realizing it.

Two things in particular I think are worth noting as "tricks" to solve these problems.

When you look at the symmetry of a circuit, you can divide it into "left/right" and "up/down" symmetry. I say this in reference to the direction of current, assuming that you have current flowing from "top to bottom". For symmetrical circuits, there are sometimes two branches that the current can choose, with the same current flowing in each (because of symmetry). When that happens, you can remove half the circuit, and halve the values of the resistors in the other side. Any resistors that were connecting the two nodes would have no current flowing in them (as they are at the same voltage) - and these can be removed (like in the Wheatstone bridge). This is how you handle left/right symmetry.

Regarding up/down symmetry, if your circuit looks the same when you flip it "vertically" (that is, if current flowed from A to B and you swapped A and B, could the circuit look the same?), then there will be corresponding resistors in the "top" and "bottom" half of the circuit that must have the same current in them. When you write down Kirchhoff's laws for the currents in your circuit, this means that you can use the same symbol for these two currents. Again, this reduces the number of equations you have to solve.

Illustration of "left/right" and "up/down" symmetry

Let's take your pyramid circuit as an example, and let's solve for the resistance from A to C (because of rotational symmetry, AB and BC should give the same result). If I redraw the circuit so A is at the top and C at the bottom 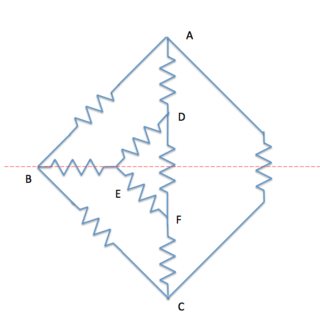 AC: parallel of $R_1$ and a circuit consisting of AD, DF, and FC in series, where

Note - these matrix equations could be used "directly" for these kinds of problems, but I'm afraid that they tend to start from the idea that you have simplified the resistor network between nodes before applying the later simplifications due to symmetry.

If this didn't help you at all, I apologize - I'm willing to try to make this clearer if you ask clarifying questions.

The common approach is to first deduce several equalities using the symmetry of the configuration of the circuit (namely the geometry) which is fairly easy and can be figured out following your instinct. Then, they will ask you to reverse the potential difference applied and figure out several other equalities. These usually can be conbined together to give you more equalities. Then, it is often able to disconnect the circuit at some places without changing the flow of the current. After that, it is possible to reduce the circuit to resistors in series and in parallel.

This is just meant to address the matrices rather than the title question.

While the scattering parameters are typically employed in RF engineering, they are part of a family of parameters used for the analysis of two-port (and N-port) networks.

For the simplest case of a two-port network, there are four variables, e.g., a voltage across and current through each port. The matrices are two-by-two and their components can have the same dimensions, e.g., impedance for Z-parameters, or not, e.g., h-parameters.

So, for example, the (phasor) voltage $V_1$ across port 1 can be written in terms of the currents through each port:

where the matrix elements $z_{ij}$ are the components of the impedance matrix. Note how the z-parameters are defined and then see why they are also called the open-circuit parameters. But we could also write

so that the y-parameters are also called the short-circuit parameters.

For the RF regime, where stray capacitance and/or inductance can be significant, it's challenging to truly open-circuit or short-circuit a port for the measurement of these parameters. However, it's relatively easy to terminate the port in, e.g., a 50 ohm resistance. The scattering parameters (S-parameters) are defined relative to a characteristic impedance $Z_0$ such as 50 ohms.

For example, we say that $S_{11}$ is the (voltage) reflection coefficient looking into port 1 if port 2 is terminated with the characteristic impedance.

Not the answer you're looking for? Browse other questions tagged electric-circuits symmetry electrical-resistance or ask your own question.

8
How to find points with same potential while solving an equivalent resistance problem?
1
How would this symmetry argument in circuits be proved?
1
Symmetry in circuit

8
How to find points with same potential while solving an equivalent resistance problem?
2
Methods for simplifying complex electric circuits efficiently and find the equivalent resistance between two points?
0
Having difficulty understanding the 'R' in more complex RC circuits
0
Unitary Matrix for Block Diagonalization
0
Equivalent Resistance Across Capacitor in RC Circuits