I left a bottle of wild cherry Pepsi in the freezer to cool and forgot about it over night. When I remembered to check it the Pepsi was entirely frozen and the bottle it was in thankfully did not explode.

When I opened the Pepsi it began to fizz and bubble at the top even though there was no liquid present in the bottle as it was entirely frozen. The fizz and bubbles were a thick very sugary syrup that was not the same temperature as the rest of the ice. I noticed all over the bottle this syrup was being forced to the top where it even burrowed holes in the ice to get out. Eventually all of the carbonation seems to have escaped from the ice along with most of the sugar and coloring.

Below are two pictures trying to mark the event: 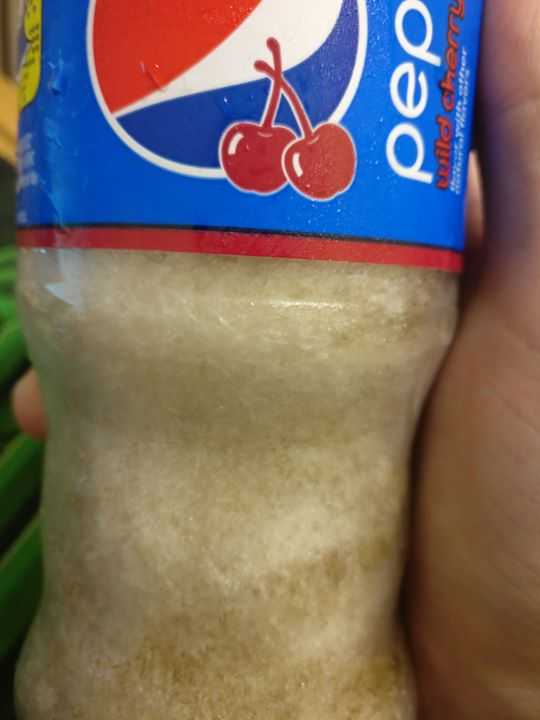 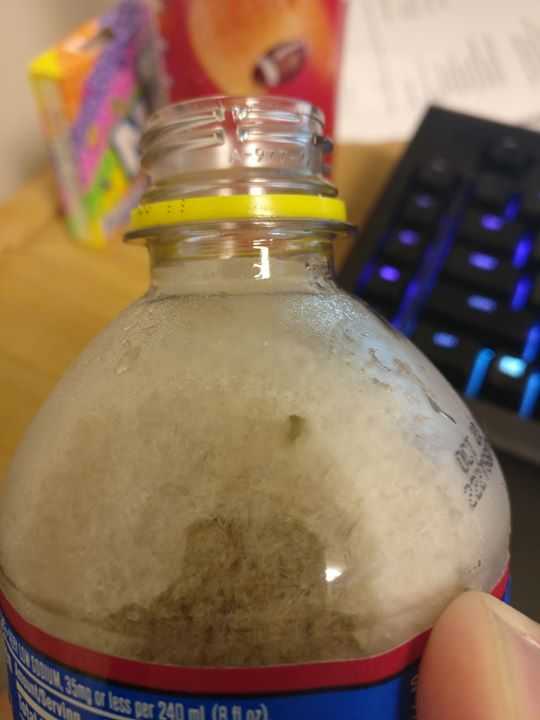 Does anybody have any idea at all why this happened? My understanding is the $C O_2$ was just trying to escape the ice since it couldn't when the crystals formed since the bottle held and the pressure stayed contained. However, I have no idea how this tunneled small holes in the ice and why the sugar and coloring almost all got pushed out too, I have never seen something like this happen before.

You are pretty much spot on with your presumptions.

But anyway, here's a few things to consider:

• CO2 has a far lower melting point than water, meaning it will not solidify under normal domestic-freezer conditions, and so will remain as a gas.

• The sugary syrup, containing large amounts of glucose, also has a melting-point lower than water, meaning it too will remain as a liquid between ice crystals.

• Ice crystals have a lot of 'empty space' between them despite otherwise appearing entirely compact, This is due to water's natural molecular structure, in addition to the presence of tiny air-pockets formed during the freezing process (explaining why H2O expands when a solid). Hence, there is still liquid in the bottle.

• Provided the bottle was sealed when frozen, the pressure within - though reduced due to the cold temperatures - would still superseded that of the outside world (the reason carbonated drinks schhhhhhhhhhhh when opened, as the pressure of the vessel equalises to the atmospheric normal).

So we now have a bottle containing frozen water and a liquid sugar syrup, in the presence of gaseous carbon dioxide - with all components loosely locked into one big crystal structure under pressure.

You open the bottle... Immediately, the pressure difference initiates the cool schhhhhhhhh noise, rapidly equalising the vessel to the standard atmosphere outside and releasing its CO2 in the process.

To escape, most of the CO2 must first pass through the frozen water - which it can do on account of being so small and the ice crystals having numerous little spaces between themselves. The migration of hundreds of thousands of CO2 molecules through the ice results in the passages, holes, 'tunnels', forming.

The CO2 is not alone in the journey, mind, as locked within the frozen water with it is the liquid Pepsi syrup, that - caught up in the movement of CO2 - also utilises the tunnels to rise up the bottle neck, pushed up and out of the ice by the force of the escaping gas behind it.

This fizzing process concludes once the pressure of the vessel equalises with the outside environment, halting the movement of CO2 and with it: the syrup, which now exists at the bottle's opening, and all over your hands...

In addition to the basic information provided by Harry, you have to know that initially the $CO_2$ gas as well as the syrup are diluted in the water. As the water crystals form, the syrup and gas separate. The gas molecules unite and form bubbles.
The crystallization proceeds in layers from the outside to the center of the bottle. Since the gas and syrup have lower densities than water, there is a tendency for the gas and syrup to form tubes as they move to the center and top of the bottle. Because crystallization is not uniform, "random" clusters of ice with tubes, created by the passage of syrup and $CO_2$, are formed.

Not the answer you're looking for? Browse other questions tagged fluid-dynamics everyday-life ice or ask your own question.

10
Why do ice cubes come out easier from top trays?
8
Why did my frozen water bottle explode when I opened it after it defrosted a bit?
1
Is there any advantage to using simple syrup over just dissolving sugar and waiting a minute?
2
Distance traveled by a water jet
14
Why does hitting a cold bag of water freeze?
10
Blender physics: Size of ice cubes affects crushing of nuts
2
surface tension and air pressure
13
How and why would a glass table break in this manner?
3
While freezing ice from salt water, does the salt dissolve in the ice or is it separated out?
65
Why was water freezing almost instantaneously when shaking a bottle that spent the night outside during a frosty night?