How should one determine the motion of extremely large extended objects?

[To put this question in context, I was reading "How much time will it take to move an object whose length is equal to one light year?" and don't really feel satisfied by the answer that has been upvoted and accepted. This question builds off of the question and comments I left on that answer.]

Consider the following scenario: You float in an otherwise empty universe near the end of a very long uniform, solid rod. The rod is long enough that light takes a measurable amount of time to traverse its length - so, say, it's 1 light-year in length. The material of the rod is not important other than that it is fairly stiff and strong and (for simplicity) that it is non-dissipative and non-dispersive. The rod has a total length $L$, a total mass $M$, a density $\rho$, a speed of sound $v_s$, and (if it matters) a cross-sectional area $A$. All of the values (except for the length) should be taken to be reasonably-sized given the constraints of the problem (specifically, the mass $M$ should be very large).

If you push on the rod, how long would it take for the rod to move some finite distance $d$?

If you were to strike the end of the rod with a hammer, a compression wave would form in the rod and propagate down its length at the speed of sound $v_s$. But even if the impulse is very large, the naively calculated velocity of the center of mass ($v_{CM}$) of the rod would be very small (since the rod has such a huge mass $M$).

Now, I'm totally on board with the idea that the wave packet (and therefore the information concerning the push) will take a certain, constant amount of time to traverse the length of the rod, namely $t_1=\frac{L}{v_s}$. However, it is not clear to me that (as the answer-giver suggests in the other thread) this means that $t_1$ is the same amount of time it will take for the far end of the rod to move the distance $d$. Instead, I would think that it should take an amount of time $t_2$, where $t_2$ must be no smaller than $t_1$ but is asymptotically related to the ratio $\frac{d}{v_{CM}}$.

Furthermore, for a sustained force $F$ being applied to the rod, I would expect a classical acceleration of $a=\frac{F}{M}$. That means that my expected asymptotic relation should be $\sqrt{\frac{2d}{a}}$.

The only case where I could see the original logic being correct is if the rod were very easily compressible and the the distance being compressed were very small. In that case, one could compress the rod a distance $d$ quickly and then hold the compression in place to prevent rebounding as the wave packet propagates away.

Is my intuition about this problem correct? If not, why not? If so, how can one calculate the correct form of $t_2$ which takes into account the speed of sound in the rod and its immense length? Considering the scale of the rod, does the problem change if gravitational or non-classical effects are taken into account? 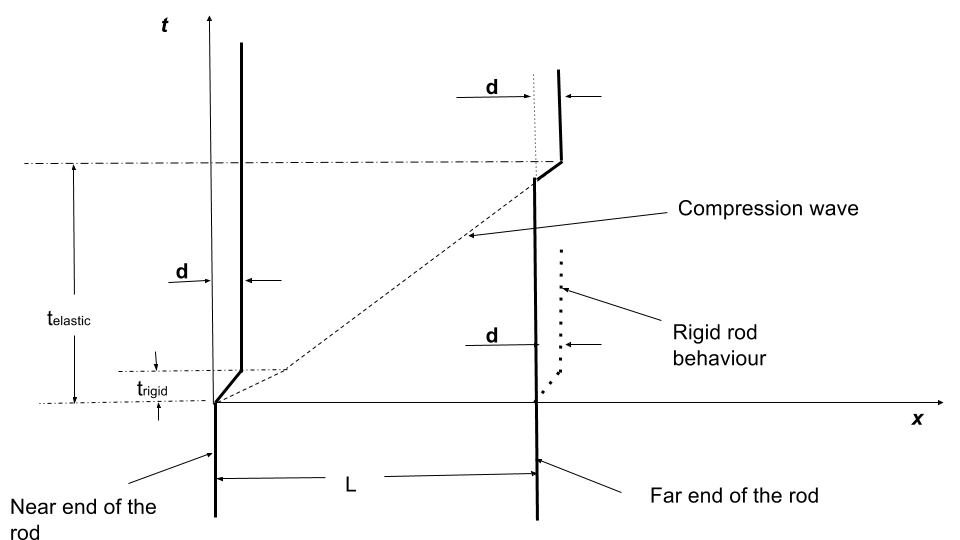 Suppose the near end of the rod is moved a distance $d$ with uniform speed $v$ away from us, after which it is brought to rest. This takes time $t_{rigid}=d/v$; this is the time that far end of a perfectly rigid rod would take to move a distance $d$.

Not the answer you're looking for? Browse other questions tagged classical-mechanics waves material-science inertia or ask your own question.

4
How much time will it take to move an object whose length is equal to one light year?

4
The Effects of Moving Matter Across Light-Year distances
5
What is the theoretical upper limit on the rigidity of a material?
10
Proving that the angular velocity vector is equal to a limit involving the rotation vector
0
How would a layer of hot air affect the normal frequencies in a pipe?
1
Do you have an idea for two easy experiments to measure the coefficients of static and sliding friction of a rope wrapped around a steel rod?
1
Can we apply simple mechanics laws on sound waves
1
Is strain during free thermal expansion zero?
0
Why do we take two measurements of length in a resonance tube and then use their difference to find the velocity of sound?