Is the vacuum state a coherent state?

Would one consider the vacuum state a coherent state?

In fact, a nice way to see this is in the Wigner function formalism. The vacuum state is just a Gaussian sitting at the centre of $(x,p)$ space whereas a coherent state is the same state displaced to another point. This is illustrated in the figures below, taken from this site: on the left is the Wigner function of the vacuum state, and on the right that of a coherent state. 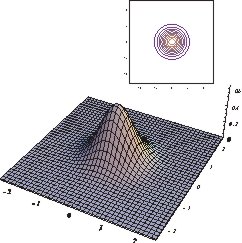 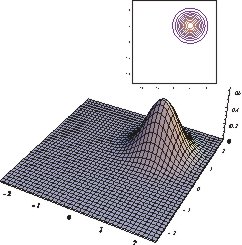 Coherent state is a superpostition of states with different particle number with a weight of Poisson distribution. In other words, $$|\alpha\rangle =e^{-{|\alpha|^2\over2}}\sum_{n=0}^{\infty}{\alpha^n\over\sqrt{n!}}|n\rangle $$ where $|n\rangle$ is a state with $n$ number of particles.

Thus when you say that my system is in coherent state, you mean that your system does not have a definite particle number. This is why if you remove a particle from that state with $$a|\alpha\rangle=\alpha|\alpha\rangle$$ you dont change the state. That's why coherent state is an eigenstate of annihilation operator.

Not the answer you're looking for? Browse other questions tagged quantum-mechanics optics harmonic-oscillator coherent-states or ask your own question.

7
In what sense are spin coherent states "classical"?