Connection between QCD Lagrangian and the strong running coupling constant

I know the QCD Lagrangian as well as the running coupling constant for the strong force.

But how are they connected? The Lagrangian should contain the coupling constant, shouldn't it?

The Wikipedia page you quoted gives the QCD Lagrangian in its most compact form, using the convention that there is an implicit sum over any repeated indices,

where $A^a_\mu$ is the gluon field. In those formula $\mu$ and $\nu$ are the spacetime indices whereas $a$, $b$, $c$ on one hand and $i$, $j$ on the other hand are colour indices, representing two different representations of $SU(3)$. By that I mean that $\psi_i$ represents a quark of colour $i$ whereas $A^a_\mu$ represents a gluon of colour $a$. That wikipedia page did not bother to remind readers of the definition of the covariant derivative $D$, which, I am sure, can be found on their page about Yang-Mills gauge theories. Here it is:

where the $T_a$'s are generators of that representation of $SU(3)$ (the i in front of $g$ is the imaginary number, not the index $i$, just to be clear!). I am probably too terse I know but the alternative would be to write many pages, and better people than me have already done that: I suggest you check at least Wikipedia or much better, a good book on quantum field theory, especially about that question of representations.

This is the same $g$ appearing in equations (1) and (2) and it embodies the strength of QCD coupling. Then $\alpha_S$ is defined as

This answers your question. But since I went that far, I'll address the questions which naturally come next: why using $g^2$ in that definition? And why $4\pi$?

The $qqg$ vertices come from the term featuring $\text ig\bar{\psi}_i \psi_j A_a^\mu $ in the lagrangian: note the factor $g$. The $ggg$ vertices come from the terms featuring three fields $A_a^\mu$: it too has a factor $g$. This is true for the other type of vertices not appearing on those diagrams: each vertex brings a factor $g$. As a result, the transition amplitude represented by those diagrams is proportional to $g^3$. But then we measure cross-sections, which are proportional to the modulus square of the amplitude. So the cross-section for that process, taking into account only those lowest order diagrams, will be proportional to $g^6$, i.e. $\alpha_S^3$.

What happens if we add more vertices, or equivalently go to a higher order in $g$? One will necessarily add 2 vertices at least, e.g., 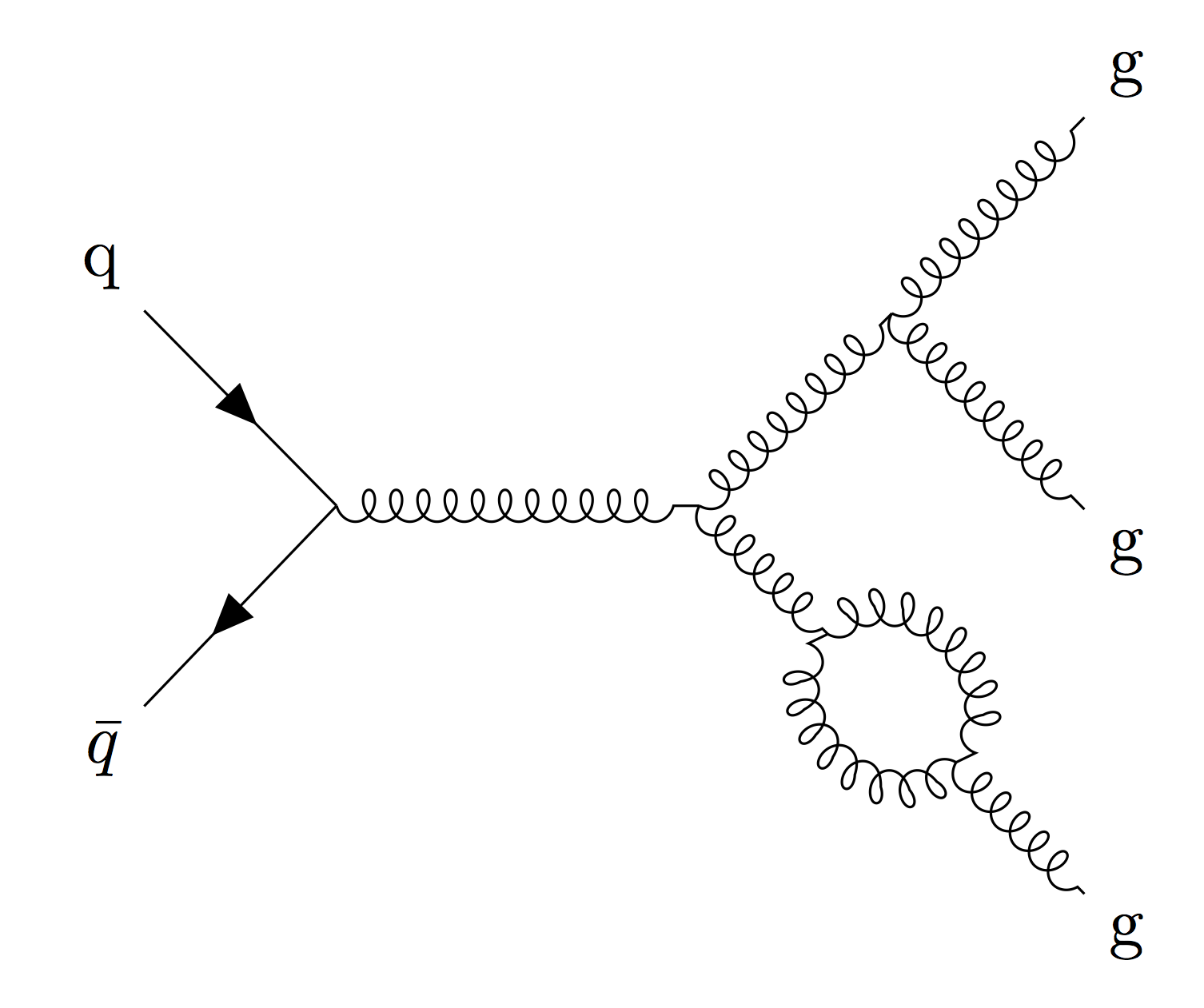 As for the $4\pi$, it is a historical fluke as far as I know. In QED, you would have the electron charge $e$ instead of $g$ and it was customary since the early days of Quantum Mechanics to use $\alpha=e^2/4\pi$. So as not to introduce a spurious factor in the comparison of $\alpha$ and $\alpha_S$, a $4\pi$ was used for the latter too.

Not the answer you're looking for? Browse other questions tagged lagrangian-formalism renormalization quantum-chromodynamics strong-force or ask your own question.

6
Proof that QCD is the theory describing strong interactions?
7
Why do we have a non-zero quark vacuum condensate even though the QCD coupling goes to zero in the deep infrared?
3
running couplings using 'broken' and 'unbroken' SM lagrangian
7
How did people infer that the strong interactions have a large coupling prior to the discovery of QCD?
7
A question about running coupling constant
1
Why does literature list the strong coupling at the scale of the Z-boson's mass?
2
Measuring strong coupling constant