What is the force that prevents an object in an accelerating inclined plane from rolling/sliding downhill? [duplicate]

A ball on a stationary frictionless wedge would naturally roll down because of the component of its weight along the plane. But I read if the wedge is accelerated fast enough it would prevent the ball from doing so. For this to be true there must be a new force that acts on the ball and whose magnitude will depend on the acceleration of the wedge (since a certain acceleration must be reached). But I'm having trouble comprehending this new force. Is it the 'reaction' force to that of causing the acceleration or is it simply inertia and the ball is just trying to be the way it was? Or is it something else entirely? It also said that with enough acceleration the ball would slide up the ramp and fall over. I can visualize this but can't seem to explain it. 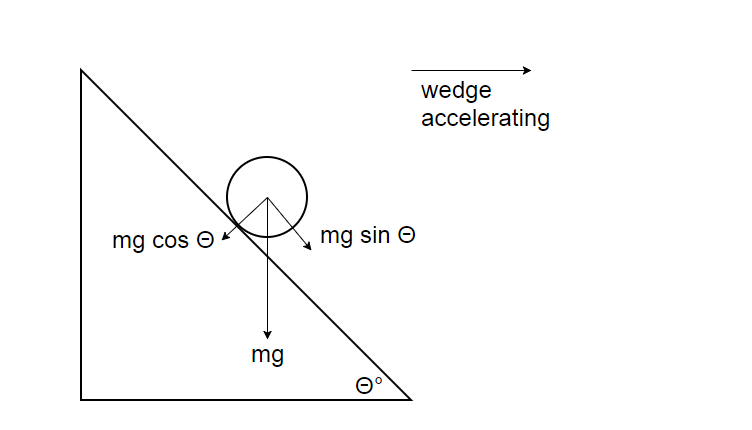 A small correction - a ball on a frictionless wedge would not roll down, it would slide.

You are right - when the wedge accelerates to the right, it applies a force to the ball along the normal of the plane. This force can be thought of as having a horizontal and vertical component - and if the vertical component is equal to $mg$, the ball will only accelerate horizontally (that is the direction of the net component of force on the ball). 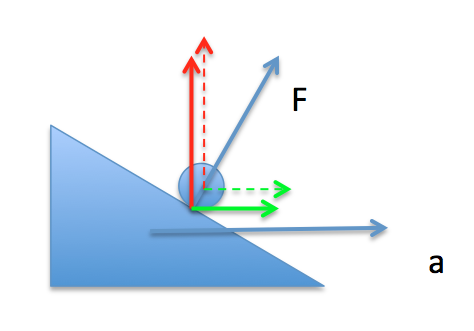 (note - the force F can be displaced along its line of action, so the dotted red and green vectors, which act on the center of mass of the ball, are just as valid as the solid ones that act on the bottom of the ball. But having them act on the center convinces you that these forces don't impart rotation on the ball).

If you accelerate the wedge even more, the vertical component of the reaction force will be greater than the force of gravity: you end up with a net force that points up. So the ball will move up the ramp (still not rolling, as it is frictionless...)

0
Can a ball stay still while laying on a inclined plane?
2
What causes a tall box to tip over on an inclined plane?
3
What would be the equations of motion in this case of initial & final rolling on a ball in an accelerating car
3
Why doesn’t friction cause a ball to move in the opposite direction?
42
What will happen to a ball kept on a frictionless inclined plane?
1
Working with ramps and rotational acceleration (friction involved)
0
Banked Corners and Centripetal Forces Question