Why is the potential energy of a spring the same when it is compressed and stretched?

I'm giving a high school lecture and I want to introduce the potential energy of a spring. My students have not learned the Hooke's Law and the notion of integral is too advanced. I'm really trying to justify with a hand waving argument that the energy is given by

To do so I let them realize that stretching/compressing the spring will change its energy. So this lets me justify why it only depends on the properties of the spring captured by $k$ and the deformation $d$.

Then by looking at the units of energy they should realize that the deformation $d$ has to be squared and that the constant $k$ takes care of the remaining units.

But if a student argues that $k$ could be defined with other units so that the dependence in $d$ is linear, I could answer that the energy should be identical whether the spring is stretched/compressed so that only $|d|$ or $d^{2n}$ are possible solutions. I see how to justify that $|d|$ is not a physical solution because it would create a cusp in the energy in $d=0$ and that nature does not like that (at their level at least). Additionally, having $n=1$ is just the simplest case.

My missing argument is therefore how to justify that the energy is the same when a spring is stretched/compressed by $d$.

One way is to explain how a spring actually works.

A coil spring is a large wire that is wound into a helix. When you compress or extend a spring, from the wire’s perspective, you aren’t really pushing or bending. Instead, you are twisting the wire one way or another.

Twisting a bar clockwise or counterclockwise should be the same thing.

Unfortunately, there isn't a physical reason that the energy must be the same at +d and -d, because in general it is not. All springs will be nonlinear and non-symmetric if you stretch them enough. The reason we can write $F=-kx$ is that you can always linearize the force for sufficiently small displacements, and then you just assume you're working in the linear regime. You might just have to assert to the students that for small enough displacements, the energies are the same in each direction. Alternatively, you could use another system for which there would be no reason to believe that the energies aren't symmetric, such as a pendulum.

One aspect you might mention is that the potential energy of a particle is related to the force the particle feels (since mathematically the force is the negative gradient of the potential energy). This point is powerful for intuitive arguments. For example, you can argue that the energy shouldn't be |d| because then the restoring force would be the same whether the spring is stretched a little or a lot, which seems unreasonable.

If possible, you could also have students test this with a spring in the classroom, feeling the force by holding the spring displaced by different amounts in either direction to get them on board with the idea that the force is symmetric on either side of the equilibrium point and that it increases as you pull (or push farther).

This is really a question of practical vs. theoretical. Any spring actually will have a non-linear effect. But in theory we ignore it for a basic understanding. So we assume it is linear. Here are some ways to approach this: If the spring body is hidden from your eyes and all you have access to is a movable handle connected to the free end of the (hidden) spring, then you can't tell which way the spring distorts (stretch or compress) when you move that handle--it takes the same amount of energy to distort it the same distance. Besides that, consider that a short section of the spring (for example, a short section of the spring wire, assuming a coil spring), bends one way when the spring is stretched and the other way when the spring is compressed. Bending a piece of metal compresses one side and stretches the other, or stretches the one side and compresses the other. If the spring is homogeneous, then this is the same sort of distortion.

Your students are correct. Without Hooke's law, springs would store energy linearly.

Ie, if the force to extend or compress a string was constant regardless of how far away from "rest" the spring is, you'd end up with k|d| energy stored by moving a spring d distance.

And a spring-like device that behaves that way is physically possible and reasonable (to a pretty good approximation). If your argument does not respect this fact, your argument is wrong, and any convincing of your students you pull off is in error.

This, however, is an opportunity. Put down two different equations for the energy stored in a spring, one with |d| and one with d^2.

Work out how you'd determine which is more correct. What does each equation predict?

With d^2 this isn't the case; a small distance movement near rest is going to be less force than one far away from rest.

So now we have a prediction:

You could go further and work out the in the d^2 case, the force is roughly proportional to d, but you don't have to.1

If |d| hypothesis is correct, this system should be in equilibrium, as both springs apply the same force.

If d^2 hypothesis is correct, the system isn't, and the one far from rest should pull the one near rest.

And ... done. We just experimentally proved that |d| isn't true, and that d^2 is at least consistent with observations. (We have not proven that d^2 is correct, that takes more work).

If we divide the J delta by the average distance of these test locations, we get F ~ 0.02 * d N/m assuming force doesn't vary over small distances.

As noted, this isn't a requirement to the above argument.

I don't know if I'm correct, but what comes to my mind is the following:

You can tell them to take (imagine) two identical springs, and get them in contact with each other on one side and attached to walls on other sides. Now apply force at the point of contact of springs horizontally, such that one gets stretched and other compressed.

Now, the distance by which the springs have been compressed is same. Moreover, the work done on both of them is same (adding all the forces, including spring force on each other), which implies that the energy stored or potential energy is same.

Please correct me if I went wrong somewhere, or ignored something.

You are going way too far with the Occam's razor! For this very basic physics the best is to make small live experiments and leave it to Nature's authority.

Take a spring hang it somewhere and stretch it by some distance $d$ with some weight $W$. The work done by the load is: $d\times W = U$. By measuring $d$ for a few $W$ and then computing $U$ you can easily verify the quadratic dependency when elongating the spring.

What about negative $d$? For that we need to repeat the experiment compressing the spring. By fixing the spring to a surface and loading weights on the top of it you can easily find out the same quadratic dependency.

Finally the key point is that whether the spring is compressed or elongated, the force and the displacement have always the same (positive or negative) sign, therefore we always have positive work on the spring and positive energy stored in it.

If you want to avoid calculus, give them a geometric understanding: plot the $F vs. x$ line and state that the energy is the area inbetween the x-axis and the curve. They all know the area of a triangle (hence $1/2kx^2$)

The expression depends on the spring. Some springs are constant force (constant-force springs), so the expression for potential energy would not be a quadratic.

So the best way to avoid mathematics is to just assert that Hook's law is valid for most springs, for small amounts of stretch. If they ask why the energy is the same in compression and tension, just say that there are springs for which this is not true. 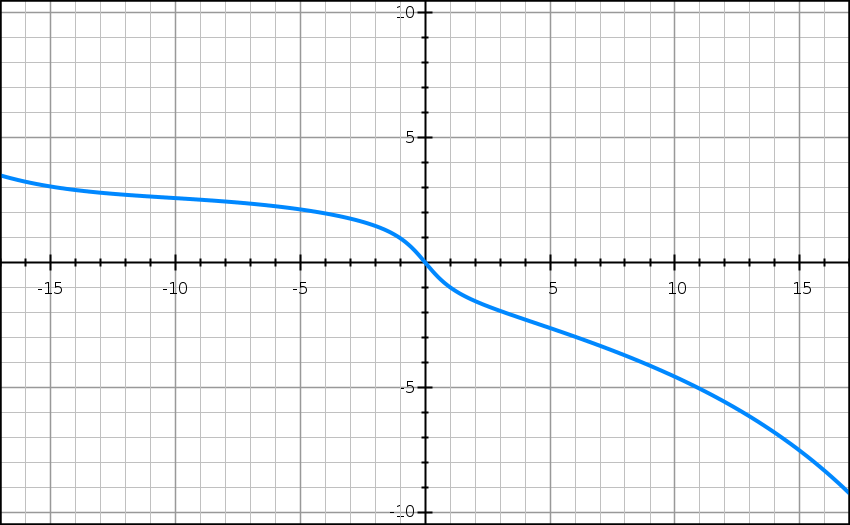 The precise form of the force doesn't matter, just the overall shape. Then say, "we'll be focusing on what happens when the spring is only streched a small amount." And then draw the tangent line at zero: 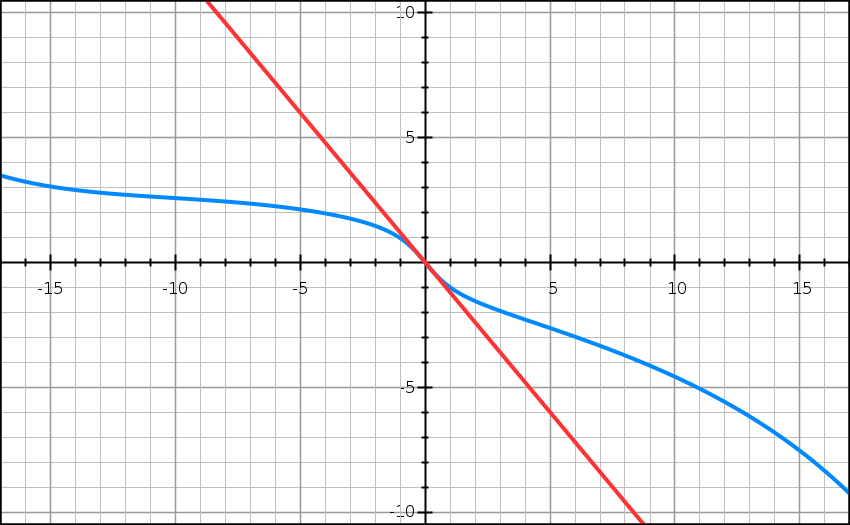 Hopefully they'll all agree, just from the picture, that this is a good approximation when the displacement is small. Then you can say that, in this approximation, the force exerted by the spring is clearly equal and opposite when the spring is compressed or when it's stretched. Thus, the spring should store the same amount of energy. This is kind of a gentle way to introduce the idea of a first order Taylor expansion, which is what Hooke's law is based off of, but in a way that is easy to understand graphically. It's much easier to understand than a second order Taylor approximation to the energy, since it's not obvious why you would want to approximate things by parabolas if you've never seen a Taylor series. But it's pretty obvious why you might want to approximate things by straight lines.

Not the answer you're looking for? Browse other questions tagged newtonian-mechanics potential-energy education spring or ask your own question.

0
Repulsive and attractive forces causing restoring force in a spring