A related question is Hydrogen bomb radiation output, but my question is based on the seismograph data (or any other data) possibly producing a distinctive pattern.

Is it possible to tell the difference, if the test occurs inside a sealed chamber? (The obvious point here is, can a unverifiable claim be made, so it is in the interest of the "tester" not to allow radioactive byproducts to escape.)

Another obvious reply is that the answer is yes, based on previous tests and/or computer simulated tests. But I don't know if this is true or not, although I suspect a different vibration pattern is involved.

To clarify this, I thought initially (and naïvely) that the time delay as described below might show up in some fashion in seismological data, but I doubt if even LIGO (with suitable adaption), could detect the trigger explosion: 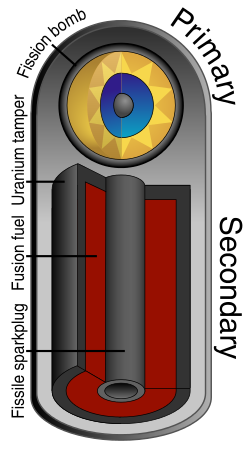 The basic principle of the Teller–Ulam configuration is the idea that different parts of a thermonuclear weapon can be chained together in "stages", with the detonation of each stage providing the energy to ignite the next stage. At a bare minimum, this implies a primary section that consists of an implosion-type fission bomb (a "trigger"), and a secondary section that consists of fusion fuel. The energy released by the primary compresses the secondary through a process called "radiation implosion", at which point it is heated and undergoes nuclear fusion.

The following is verbatim from What eathquake science can tell us about North Korea's nuclear test, from Phys.org, published Sept.4th 2017:

Seismological data can tell us whether there was an explosion, but not whether that explosion was caused by a nuclear warhead or conventional explosives. For final confirmation that an explosion was nuclear, we have to rely on radionuclide monitoring, or experiments at the test site itself.

Similarly, we cannot explicitly differentiate between a nuclear fission bomb and a thermonuclear hydrogen bomb, nor can we tell if a bomb is small enough to be mounted on a missile, as the North Korean government claims.

The article states that explosions produce amplitudes of various seismic waves different from earthquakes, and the depth of earthquakes is greater than that of explosions (the depth is measured by timing the arrival of different wave components) but seismographic data cannot do more than this.

Note that the yield of the RNK's test is estimated to be in the range ~ 100 kilotons, suggesting a boosted atomic device rather than a full fusion device. For comparison the warhead on a Titan II missile was something like 9 megatons.

If you know the exact time difference between the primary explosion (fission) and the secondary fusion (and fission), you can tell if it is a A-bomb or a H-bomb.

3
Russian Doll Teller Ulam?
5
How would the explosion from a Pure Fusion Bomb differ from the explosion from a Fission Nuclear Bomb?
2
Fission bomb: How much of it burns?
45
Cause for spikes in Trinity nuclear bomb test
0
Can an atomic bomb/rocket with nuclear warhead's nuclear explosion be triggered by a conventional explosion close to it?
1
Why Hydrogen bomb is called “Thermonuclear Bomb”?
1
Hydrogen bomb without fission stage