What would an intuitive explanation for the $E$-$k$ diagram?

In all of my solid state books they seem to plot the $E-k$ diagram. But I don't understand why ?

What is the physical significance of the $E$-$k$ diagram?

Please don't give answers like it shows the forbidden and allowed bands. For that we should have been better off plotting $E$-$r$ (where $r$ is distance of electron from nucleus).

I also want to intuitively understand why for some bands and some values of $k$, $E$ increases with increase in $k$, and for some other bands $E$ decreases with $k$. 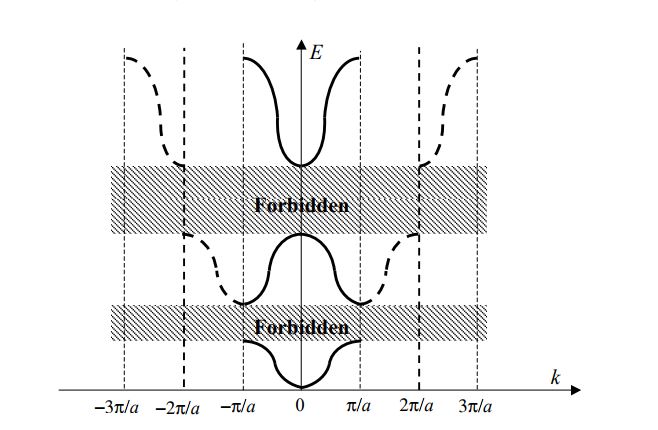 I'll try to expand on my comment, and address some apparent misconceptions in your question.

Lets start with your comment 'we should have been better off plotting $E-r$' - why should that be? When we look at electron orbits around an isolate nucleus, we get discrete wavefunctions (the s, p, d, f, ... functions). While the probability distribution can be looked at as a function of the electron-nucleus distance $r$, the energy of the orbital is a function solely of the quantum numbers. It is not a function of $r$ at all. We also look for wavefunctions that are centered on the nucleus - there is no consideration for translation of the nucleus in atomic energy levels, so there is no linear momentum in an atomic orbital.

Now lets go to a crystalline solid. True, we abandon atomic orbital descriptions of electron energy levels. Why? Not just 'because', we do so since we have a description of a solid as a Bravais lattice, a space-filling description using lattice vectors. We look for electron wavefunctions that are Bloch functions which take advantage of this representation and insist that the Bloch functions be constrained by the lattice. That is, the Bloch functions are invarient under translation by arbitrary linear combinations of the unit vectors. The result of solving this (non-atomic) wave equation is a wavefunction that explicitly has linear momentum in it. A given energy level has a linear momentum associated with it since translation with the lattice is allowed (required).

Now, lets put a 'free' electron in a crystal. We get a nice parabola in $E$ vs $k$, since being a free electron means it is classical in nature. But, wait, the classical 'free' electron is not a Bloch function - it has no relationship with the lattice. So, lets make in 'nearly' free, forcing it to be a Bloch function with little other impact. Again, you get a parabola in $E$ vs $k$. OK, good. Now apply the momentum symmetry from above - take that parabola centered on $k = 0$, and translate it by multiples of $\pm {{2\pi}\over{a}}$. Those are all equivalent levels. The result is you get a bunch of parabolas intersecting at points at the zone edges.

Next, lets look at what 'nearly' free really means. It means there is some small interactions going on. So, focus in on the intersections in $E$ vs $k$ space - you have two solutions trying to be in the same place for an electron, which is a fermion. This is a problem. You now have some interaction (the 'nearly' part) which will lead to level splitting - you can't actually have the parabolas cross. You get a forbidden zone, the width of which depends on the strength of the interaction.

Going to even-less-free electrons (which is most crystals) leads the the wide range of band structures that you can find in nature, including having minima of bands away from the symmetry points (like in silicon), minima of an upper band below the maxima of a lower band but separated in $k$ (semimetals like tin), and so forth and so on.

1
Semi-conductor band-gap and deformation potential
14
What is it about the “conduction band” of a material that is distinct from the valence band?
2
valence and conduction bands
1
Why diffusion current increases under forward bias in pn junction?
2
Quantisation of $z$-angular momentum eigenvalues
0
Why don't we use Leibniz integral rule when solving Diffusion equation using the Fourier transform?
3
How to interpret phase diagrams?