How (if at all) can the neutron-proton ratio of stable atoms be explained under the nuclear shell model? [duplicate]

Ask Question
Asked 4 years ago
Active 2 years, 8 months ago
Viewed 314 times
5
$\begingroup$
This question already has answers here:
What makes the number of neutrons the number of proton similar? (3 answers)
Closed 2 years ago.

To begin where I did with this question, I was originally wondering about why the neutron-proton ratio is close to 1 for stable nuclei. The answer to my original question (as far as I understand it) is that, due to the exclusion principle, not all of the protons or neutrons can be in the ground energy state inside the nucleus, therefore when the neutron-proton ratio is already low it would take more energy to bind an additional proton than it would for a proton to decay into a neutron, or vice versa when the ratio is high, so the ratio tends towards 1.

But in reality, the nuclear ratio does not tend towards 1. After some research, what I've found is that, via the Bethe-Weizsäcker formula from the liquid drop model of the nucleus, nucleon binding energy is minimized when the nuclear ratio is near $1+\frac{a_C}{2a_A}A^\frac{2}{3}$. However, it was my understanding that the liquid drop model is mostly considered outdated, as it cannot account for various observations, such as the magic numbers, which are readily accounted for by other models like the nuclear shell model. So, to get back to my question, is there any way to account for the increase in neutron-proton ratio with the nuclear shell model?

I'm guessing that the previous question referred to is What makes the number of neutrons the number of proton similar?, and in that question I used the following diagram to explain why the numbers of protons and neutrons were roughly equal:

So equal numbers of protons and neutrons gives the lowest overall energy. However this assumes that the energy levels for the protons and neutrons are the same, but they are not. Protons repel each other due to their charge but neutrons do not, so the energy levels for protons are more widely spaced than for neutrons. A better (though still just schematic) way to draw the diagram would be:

As before we imagine starting with all protons and converting protons to neutrons to lower the energy. But now because the neutron energy levels are more closely spaced than the proton energy levels we end up with more neutrons than protons.

The effect of the electrostatic repulsion increases with nucleus size because the average spacing increases as the cube root of the number of nucleons. That's why the disparity is larger for larger nuclei.

You specifically ask about the shell model, and this is basically the idea that the nucleons occupy energy levels much like the electrons in atoms. So my argument above is essentially using the shell model, though I have greatly simplified the details.

This experimental plot is relevant: 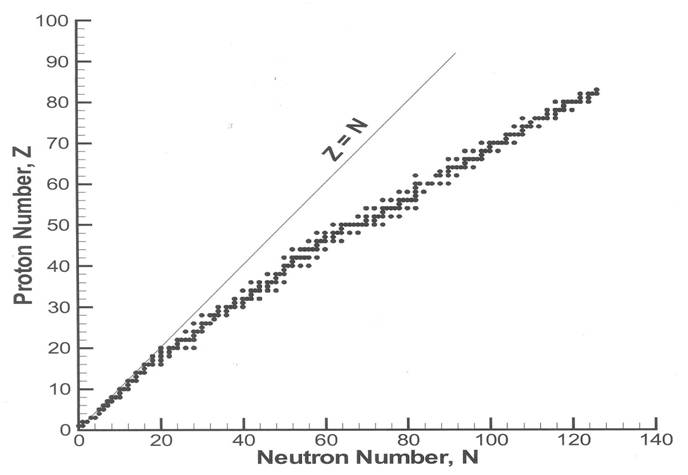 So you are asking if the nuclear shell model can fit these data.

The nuclear shell model developed because of the magic numbers observed in the stability curve:

This link discusses the stability issue according to different nuclear models:

Shell structure is a necessary ingredient in the explanation of nuclear deformation. We note that the Bethe–Weizsacker mass formula predicts that nuclei should be spherical, since any deformation at constant volume increases the surface term. This can be quantified by a “deformation potential energy” as illustrated in Fig. 2.11.

So, as with all phenomenological models, corrections exist which will utilize other models, in this case the more precise shell model used to modify the liquid drop. In this link the research is continuing by use of stronger tools and computer simulations .

14
What does a nucleus look like?
6
Nuclear Spin of Sodium 23
1
If Hydrogen's nucleus lacks a neutron, then what is keeping the nucleus stable and the proton inside it?
0
C-15 spin and parity at ground state
0
How are confinement and radioactive decay both possible?
1
Why does $S_p$ increase for closed neutron shell?
2
Which properties of individual nucleons change depending on the nuclear environment?
0
How should a *good* nuclear theory explains spin-orbit coupling?