Why doesn't the top block's mass affect the acceleration of the bottom block when they're stacked?

My question is, i'm sure, trivial and one I should know. Why isn't the effective mass of the lower block, $m_2$, the sum the two masses, $m_1$ and $m_2$? That is, why isn't the acceleration of the bottom block given by $$\textbf{a} = \frac{m_1g\mu_k}{m_1+m_2}\; \textbf{e}_x$$ Instead, the actual answer is $$\textbf{a} = \frac{m_1g\mu_k}{m_2}\; \textbf{e}_x$$ which doesn't make intuitive sense to me. This answer implies that the acceleration of the bottom block would be the same even if $F_f$ were not a frictional force but instead applied to the left of the bottom block in the absence of the top block. How can this be?

I suppose the title is misleading. In both "answers" $m_1$ is present. My question more has to do with the "effective" mass of the bottom block being $m_2$ or $m_1+m_2$

If the magnitude of the force applied on the top block, $m_1$, is less than $$F_{app} = (\frac{m_1}{m_2}+1)F_f$$ the two masses will move together with an acceleration of $$a=\frac{F_{app}}{m_1+m_2}$$ But, for any larger force applied on the top block it just starts to slip across the surface of the bottom block. A larger force will make it slip faster but the force of friction doesn't depend on how fast it's slipping.

Because the bottom block is resting on a frictionless surface increasing the mass of the upper block doesn't increase a restrictive force of friction on the bottom block.

The equation for motion for the upper block will be given as,

And that for the lower block will be given as,

However this is the case when there is slipping between the two blocks and $F_f$ is at its maxima.

But, when the block move together i.e, $a_1 = a_2 =a$, you will have totally different equations of motion.

Lets take a look at the extreme case when there is no sliding between the two blocks.

Before I start forming the equations, it should be understood that the maximum value of frictional force, in the given condition, is $\mu m_1g$.

Depending on the value of $F$ : the boxes could either stick together and hence, move with same acceleration or slip over each other and have different values of acceleration.

In the extreme case, when the blocks just have the tendency to slip, the frictional force will be at its maxima. Friction force is self adjusting and it tries to be as higher (in magnitude) as it can be, depending on the values of F.

In the extreme case, acceleration of the blocks is the same and frictional force is at its maxima, and $F_{max}$ is that maximum value of $F$ for which no sliding occurs.

However if $ F < F_{max}$ the blocks will always move together no matter the value of $F$. The value of $F_f$ will shift accordingly in such a way that both blocks move with same acceleration. That's the beauty of frictional force !

Since you have used $\mu_{k}$ in your equation, the blocks should be sliding over each other. Therefore, they cannot have same acceleration. That's also the reason why you won't get the value of acceleration given by equation $(1)$.

For making the equations of motion I have considered constant value of $\mu$. To be specific when there is no tendency between the block to slip the nature of frictional force will be static, otherwise kinetic.

You are only dividing by the mass of the lower block because $F=ma$ for each object individually - where $F$ is the sum of forces ONLY on that object, $a$ is the acceleration ONLY of that object, and $m$ is the mass of that object ALONE. The sum of the masses would come into play with the normal force between the lower block and the table, but there is no friction there so it doesn't affect the motion in this problem. 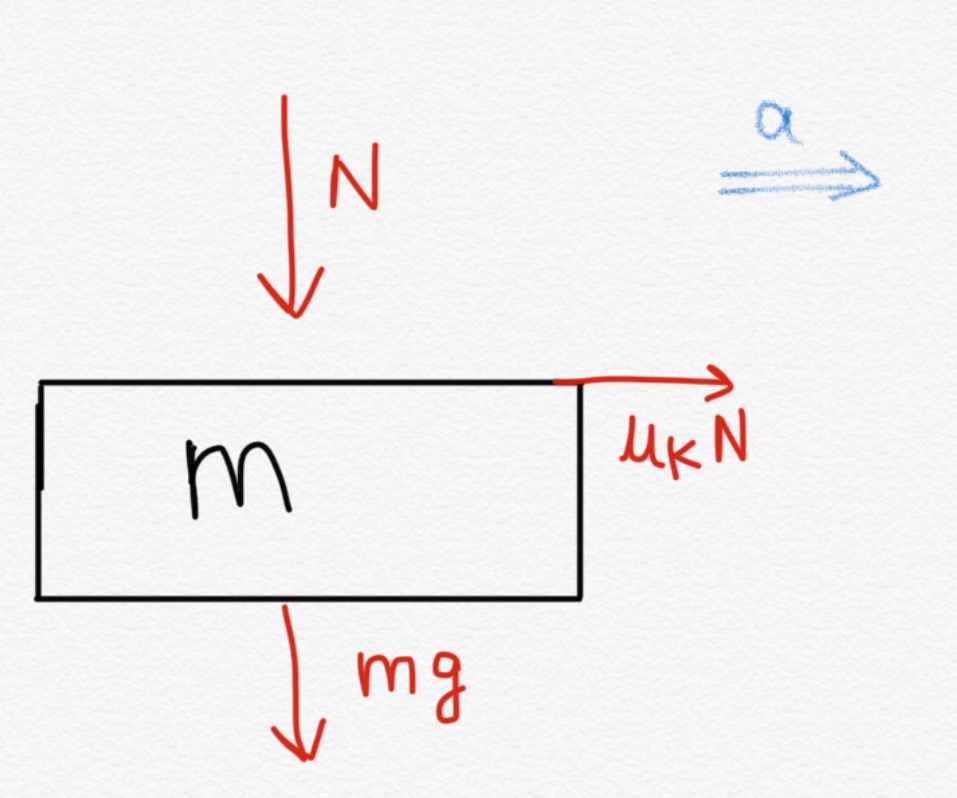 The picture has a force diagram for one of your masses $m_2$ The magnitude of acceleration in the $+x$ direction is indicated by $a$.

Since, the system is at equilibrium along the vertical,

The acceleration of the bottom block in the $+x$ direction will be the sum of all the forces in that direction times the reciprocal of the mass of the block. $a=\frac{m_1g\mu}{m_2}$.

18
Block on a block problem, with friction
1
Why is the force of Friction less than the force applied on the block in this situation?
0
Two-block system acceleration when applying a force in the $x$ direction
1
Understanding role of friction in block on block problems
0
A block on a bracket on a surface
3
Why doesn't the static frictional force between two blocks, placed on top of one another, cancel out the applied force?
2
Two stacked blocks with the upper block pulled with force $F$
0
In a system of stacked blocks with friction, how can the top block have no acceleration?