So this problem actually comes from The Classical Electromagnetic Field by Leonard Eyges and says:

The straightforward approach is to use Poisson's equation $\nabla^2 \Phi = 4 \pi \rho,$ thus calculating the laplacian of the given potential, but this reduces to zero, hence resulting Laplace's equation and implying there is no charge distribution at all.

Another approach could (should?) be the use of complex analysis to solve the problem, but I don't see a need to, although it's true that a charge distribution generates an electric field, it's also possible that in fact there is no charge distribution at all.

Is there a different approach at solving this problem or a better use of complex analysis to solve this problem?

The Laplacian doesn't quite reduce to zero. It has singularities, which should alert you to either charges or other sources of the field at the singular (in this case branch) points.

There may be other ways of doing this, but unfortunately, as soon as I see $\arctan(y/x)$-like structures, I see the imaginary parts of the logarithm function, so I'm off down that thought path before I even got to your prof's hint.

No, not quite. Also, even if this were the right approach, you'd have the same problem: the Laplacian is nought aside from at singularities. That method would give you $\mathrm{Re}(\log(z−1)−\log(z+1))$, which is the potential owing to two opposite line charges at ±1. Also, you wouldn't use the CR equations even if this were the right approach: you've got them for free in the above - the conjugate harmonic is simply $\mathrm{Re}(\log(x+i y−1)−\log(x+i y+1))$!

You've got the conjugate harmonic to this. I think this question is being very tricky: you've got a potential with circulation, so you can either interpret your potential as the scalar potential for a magnetostatic field arising from two opposite line currents, or it is an electric field with circulation. The latter can arise from two time varying magnetic fields (slow enough that you can think of the magnetic field as static) normal to the page and concentrated in two infinitely thin magnetic wires at $z=±1$. Look at how the potential varies around say $(x,y)=(1,0)$. If you look at a little closed circle around one of these paths, the potential shows branching behavior.

I see, that's a very interesting argument with the magnetic fields. One thing though, how did you conclude that the potential has circulation? To sum up your answer, and if I understood correctly, both point charges are on the branch cut of the imaginary part of the potential, thus getting rid of the singularities that arise because of it. That way, no charge distribution will produce such a potential.

No, branch points are singularities, full stop. Also, I wasn't quite right in asserting that charge distributions can't produce this field; a weird, singular one can, namely a line of dipoles. Let's plot things to see the branching behavior; here I've zoomed up the region around the point $(-1,0)$: 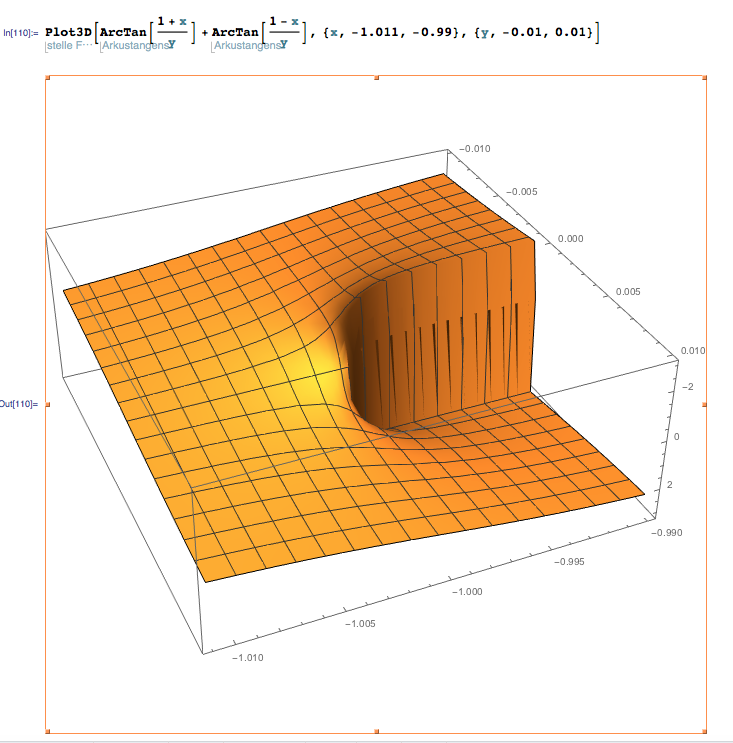 so that you can clearly see the branch cut; the potential along a circle around the point jumps by $\Delta V=2\,\pi$ as it passes through the cut. Here I've plotted a contour plot for the the whole field; remember, the lines are equipotential, not field lines: 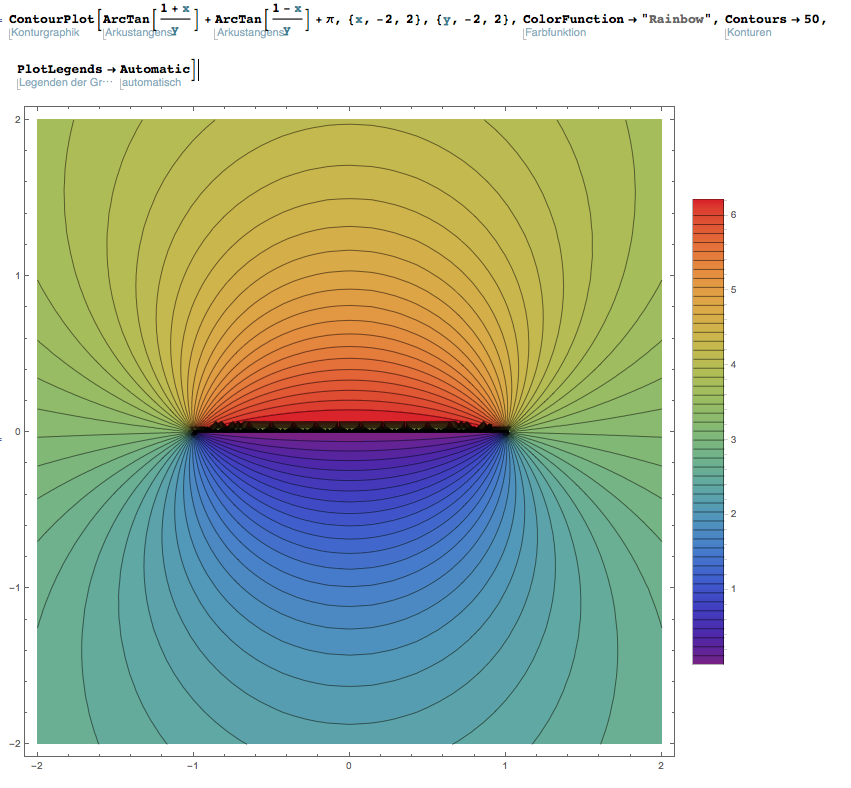 So you can solve this problem as a boundary value problem for the upper half plane, where the potential is specified on the $x$ axis as:

and the Dirichlet boundary conditions for the same problem for the lower half plane are:

The complex potential for a lone dipole is $\Omega(z) = \frac{\mu}{z}\,e^{i\,\phi}$, where $\mu$ is the dipole moment and $\phi$ defines the dipole's orientation. Note that, in a 2D field, we're talking about line charges (with lines normal to the page) rather than points. You can work this out from the electric field from two parallel lines with a small distance between them; then take the limit as the distance $\to0$ but the charges increase so that the dipole moment stays finite. Work out the potential for that and you'll understand my assertion above. Now we consider a line of distributed dipoles, along the $x$ axis between -1 and 1. So we must sum up all their potentials as

I think you should be able to reproduce your potential now.

Not the answer you're looking for? Browse other questions tagged homework-and-exercises electrostatics charge potential or ask your own question.

10
If electromagnetic induction generates a potential difference in a loop, where are the “high” and “low” potentials?