Why normal acceleration doesn't bring a change in speed?

Suppose There's a particle of mass m moving with speed $v_{0}$, at certain moment a force starts acting on it (centripetal force) and it start uniform circular motion

But plugging-in things in the equations paint a different picture

Secondly, why the velocity is always tangential to the circle, but how can we mathematically show such? Intuitively for me if there's constant acceleration toward a certain then at some point of time, the body should 'slack' and fall toward the direction of acceleration

Here' a picture for a reference: 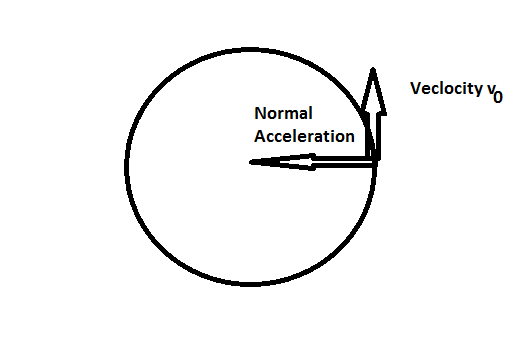 Why normal acceleration doesn't bring a change in speed?

It is, on my view, more fruitful to ask "what is the acceleration vector of an object with uniform (constant speed) circular motion?"

Such an object, moving in the x-y plane has coordinates:

where $R$ (the radius of the circular path) and $\omega$ (the angular speed of the object) are constants. The velocity vector of the object is then

Clearly, the speed (magnitude of the velocity vector) is constant and equal to $|\mathbf{v}| = \omega R$.

Now, calculate the acceleration vector (do this yourself) and find that (1) it is non-zero and constant in magnitude and, (2) it is perpendicular (normal) to the velocity always.

Let me try to answer your questions separately below.

The acceleration which you plug into this formula does not act in the same direction as the velocity in the formula does.

This formula looks like one of the four fundamental kinematic equations. They only work along one path (along one dimension), because they are scalar equations, not vector equations. Don't mix dimensions. (In other words, the acceleration (which is a gain in speed) must be a gain in the same speed as $v$ represents - and scalar-wise different directions/dimensions have different speeds).

the initial velocity v and the new velocity V due to centripetal acceleration are both mutually perepndicular vectors so adding them shall produce a new velocity vector with the above given magnitude ain't it?

If the sideways component is negligible (which it is since the acceleration only pulls that way for a negligibly short time), then the magnitude change is negligible. So no change in magnitude.

The turn is tiny, but in the next instant, the same thing happens again because the acceleration turns with the velocity. Do that many times and you see a combined large turn but no change in magnitude.

Secondly ,why the velocity is always tangential to the circle, but how can we mathematically show such?

Intuitively for me if there's constant acceleration toward a certain then at some point of time, the body should 'slack' and fall toward the direction of acceleration

Sure, and it definitely also would. But the acceleration turns along with the direction turning. In other words, your intuition is correct but for just a moment. Then you have a new situation and a new direction for your object to fall.

Think of a satellite in orbit around the planet. It is held in orbit by gravity which is such an acceleration that always points inwards.

This is essentially what happens in circular motion: The object (satellite) falls towards the centre (Earth) but misses all the time.

We can actually get at the rates of change of speed and the direction of motion mathematically in the following way. This doesn't even require that the object is moving in a circle; it is completely general.

Not the answer you're looking for? Browse other questions tagged acceleration velocity vectors rotational-kinematics speed or ask your own question.

0
Change in speed of a satellite
2
Kinematics for Non-Uniform Circular Motion
0
Intuition for formula of tangential component of acceleration in general curvillinear motion
0
How does centripetal acceleration have direction/vector and magnitude while in the formula $v^2=v\cdot v$ is scalar?
0
For a simple circular motion is the tangential part of the momentum conserved in cylindrical coordinates?
0
Centripetal and centrifugal acceleration in an athletics raceway (for example)
0
Centripetal force in circular motion