Path difference between rays in Michelson interferometer with inclined mirrors

If mirrors of Michelson interferometer are inclined the resulting configuration is the one in picture (tha analogy is with the thin wedge) where ray appear to come from $O$. If the distance between mirrors (i.e. the difference in interferometer branches lenght) is $d$, then what is the phase difference between the two rays reaching the observer? Or, equivalently, what is their path difference?

Is it simply $2d$ or is the angle of mirror inclination somehow involved in the path difference? 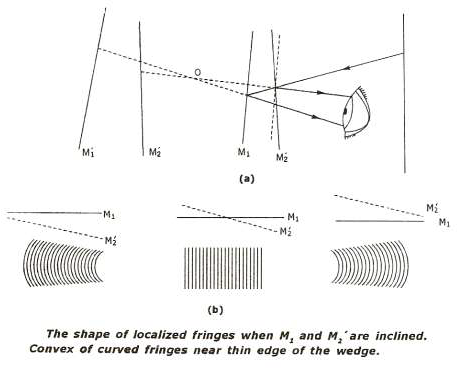 The short answer is that the fringes in the middle diagram are fringes of equal thickness.
They can be thought of a contour lines with the thickness of the wedge $d$ increasing by half a wavelength from one fringe to the next.

To try and explain what is happening I will assume that a point source of monochromatic light is being used and I have redrawn your diagram to show this but note that the angle of inclination is greatly exaggerated. 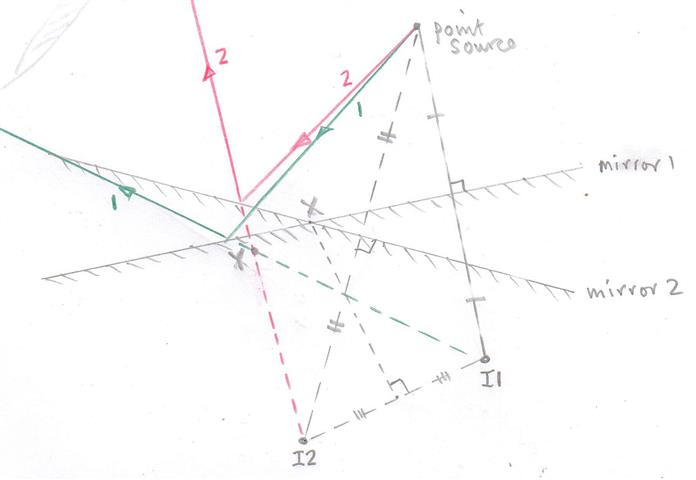 You can think of the point source creating two virtual images $I1$ and $I2$ due to the light being reflected off the two inclined mirrors.
These two images act as coherent sources and the reflected rays are shown and labelled $1$ (green) and $2$ red.
After reflection these rays app=ear to come from the two images $I1$ and $I2$.
To get an interference pattern one must make the reflected divergent rays overlap and I have shown this by drawing an eye with the interference pattern formed on the retina of the eye.

In my diagram you will note that those two divergent rays appear to come from a point $Y$ and one can think of the interference happening in that region with the path difference $I1Y - I2Y$ determining the type of fringe which has been produced.
The reason for localisation of fringes when using an extended source is not going to be part of my answer.
You will note that at position $X$ the path lengths are the same.
So in the region around the wedge there is a virtual interference pattern which can be "observed" by using a converging lens system.

So it all boils down to a two source interference pattern which in fact looks something like this with the dark lines being lines of maximum intensity. 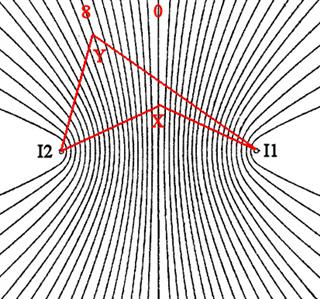 The fringes are not the usually equally spaced straight lines except near the centre of the pattern (the zero order.
The fringe labelled 8 might represent a path difference of eight wavelengths so that $I1Y -I2Y = 8 \lambda$.
But that condition is true for all points along that fringe and the geometric figure generated by a point $Y$ which is a constant difference in distance from two fixed points, $I1$ and $I2$, is a hyperbola.

How when the wedge fringes are being observed one is in effect looking down at two coherent sources and observing the overlap of the waves from these two source - that is the interference pattern.

So now look at your diagram.

When the mirrors are displaced you are look at at the higher order fringe pattern away from the zero order and they are curved.

I have tried to be as concise as possible and hopefully given you an idea of how these fringes are formed and why they are sometimes not equally spaced and parallel to one another.

I think that the only way to get a "feel" for what is going on is to actually spend some time "playing" with a Michelson interferometer and note the changes in the the interference patterns as one goes from parallel mirrors to inclined mirrors and one changes the "separation" of the mirrors (path lengths).

Not the answer you're looking for? Browse other questions tagged electromagnetism optics reflection interference interferometry or ask your own question.