Titanium dioxide has high refractive index and it is one of the whitest materials.

I would like to add a point to Stephan's answer:

White titanium dioxide is made up wavelength-scale particles, which scatter the light in a relatively wavelength-independent (Mie-type) manner. This scattering does rely on the refractive index being larger than one. Case in point, if the particles had $n=1$, they would be invisible (in air). This also relies on the TiO$_2$ refractive index having a very small imaginary part (absorption would make the film black or otherwise colored).

So while the large index of titanium dioxide does not make it "whiter" than other non-absorbing nanoparticles (in the sense of having a flatter scattering spectrum), you likely need a thinner layer of TiO$_2$ compared to other, lower index, materials to get the same scattering amplitude (opacity).

There was a question regarding Mie scattering for dielectric nanoparticles. It turns out that Mie theory is often the framework of choice to describe light scattering from wavelength-scale particles, and it makes the physicist's favorite approximation: treating the particles like spheres. These particles can have any permittivity (i.e. dielectric, conducting, etc) as long as they have ~spherical symmetry, since the theory is really more about the spherical expansion of scattered waves than anything else.

As an example, I found a non-paywall paper in which the authors use Mie theory to compute scattering coefficients for TiO$_2$ nanoparticles with the aim of designing white surfaces.

Refractive index is a different thing commonly discussed in context of lenses. Answer: 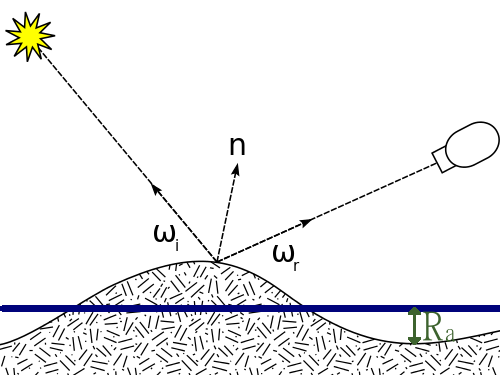 Depicted is the surface roughness average $R_a$, which is mostly used. Do not confuse surface normal $n$ with refractive index $n_1$ or $n_2$.

An interesting advanced thought, why I wrote "not strictly": High refractive index points to low transmission inside the material, hence less subsurface scattering. This might assume a minor role for titandioxide $TiO_2$.

I think there are many contributing aspects to the whiteness of titanium white. I think it is difficult to cover all of them in a single answer. You already have a very nice answer from Stefan Bischof who emphasizes the importance of the BRDF in this case.

I want to mention another aspect. The refraction index is obtained as

where $\mu_r$ is the relative magnetic permeability and $\epsilon_r$ is the relative electric permitivity or dielectric constant. These quantities are in fact not so constant but functions of the frequency $\omega$ of the electromagnetic wave. Let us assume that the relative magnetic permeability is 1. This should be realistic for nonmagnetic materials. $\epsilon_r$ also is not a real function, but a complex function $\epsilon_r(\omega) = \epsilon_r^{'}(\omega) + i \epsilon_r^{''}(\omega)$. As a consequence also the refraction index is a complex function.

The important thing in this description is that the absorption of the electromagnetic wave in the material is determined by the imaginary part of the dielectric function. For the case of TiO2 over the whole frequency range of the visible light this is obviously rather small.

Not the answer you're looking for? Browse other questions tagged optics visible-light material-science refraction or ask your own question.

2
What gives substances their color?
3
Light-matter interaction and an object's appearance
1
What's the relationship between velocity factor and refractive index?
1
A material with very high refractive index
1
How come we can get mirror-like effects from dark surfaces?
2
Refractive Index Base Wavelength
0
How does the reflection coefficient change with scattering and absorption?
6
Paint: “Darker When Dry”?
0
Bubbles (water) are transparent, then how can they produce white light in mass amounts?