EM vs Matter wave. The lie and confusion of School Physics

In school (at least in Russia) we are taught about the light as EM wave with wave–particle duality. The nature of waves is described as recursive emitting electric and magnetic fields chain. Then it's mentioned that all objects have such duality: could be represented as waves (with help of the de Broglie formula).

Much latter I accidentally faced the fact that the de Broglie wave is not a EM wave at all. But for EM quantum it's similar enough (frequency, possibly phase).

While there are still a lot vague moments with EM waves for me, is it right that EM wave is just classic outdated concept and the waves of probability amplitude (describing the probability of specific energy quantum to have specific coordinate) is much closer to reality? So there is no chain of changing electric and magnetic fields at all.

If you find my question too narrow-minded just explain it as for 6 year old child.

The answer to this question is largely philosophical and depends on your definition of the word "exists." Physics is all about building models to describe real-world behavior, and this always involves making some approximation that only captures the "essential" physics. Phenomena like temperature, pressure, viscosity, etc. all break down at the single-atom level, but that doesn't mean that they "don't exist". They are extremely useful, both for building intuition and for making quantitatively correct predictions.

But yes, strictly speaking, the notion of continuous electromagnetic fields needs to be modified at tiny length scales to account for the fact that EM radiation is quantized into photons, which can be described by probability waves in certain limits (but this "probability wave" picture is itself just a nonrelativistic approximation; in the fully relativistic context we need to invoke the much more abstract concept of a "quantum field", which creates and destroys particles from the vacuum).

But who knows if this is the end of the chain? Some people speculate that at even tinier length scales (like the Planck scale), there are even more fundamental degrees of freedom that are discrete, and so behave more like point particles than like probability waves. There is even speculation (e.g. from Gerhard 't Hooft) that at really small scales, the universe is actually fully deterministic, and the apparent "probability waves" that we observe are just useful approximations. (The physics jargon for these approximations that hold on large length scales but break down at sufficiently small scales is "emergent phenomena".) But even if this turns out to be the case, that won't mean that quantum wavefunctions and fields "don't exist" - they will (presumably) still be extremely useful for (both qualitatively and quantitatively) describing physics at larger length scales.

The truth is even trickier. The quantum mechanical description of particles as de Broglie waves determining the probability amplitudes at points in space is itself not the most fundamental one. It only applies to the non-relativistic massive particles. Photon is massless and because of that it can't be described by some wavefunction in the usual coordinate space. There are some analogs that work in the limited sense.

The most fundamental description of reality that we have now is the quantum field theory (QFT). You can in some sense understand quantum field as a de Broigle wave not in the usual space but in space of field configurations in this space. So it's not that we forget about electric and magnetic fields, it's that those are not some classical functions anymore. Rather you have some probability amplitude for every possible field configuration. Some states of this quantum field behave as quantum mechanical particles whereas some behave in a manner more similar to the classical waves.

The quantum harmonic oscillator have discrete spectrum of the eigenstates - states with definite energy. Their wavefunction are spread over some region and don't change in time except gaining some unobservable phase. Thus their probability disribution remains the same spread over some region. In fact the average position you would measure is zero. 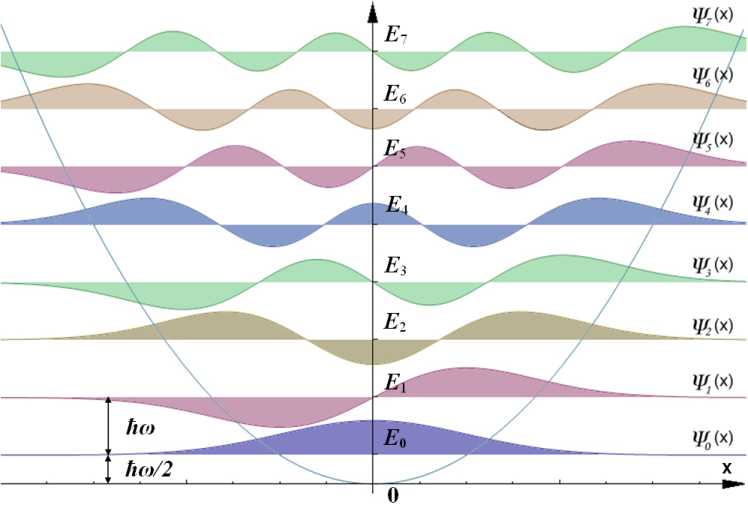 Nothing like a classical weight having some definite position oscillating back and forth. In the QFT they correspond exactly to the quantum particles like photon. It's not a wave in any classical sense, rather we can associate with some sort of the de Broigle wave with all restrictions in case of photon I've mentioned.

However you may consider certain superposition of those eigenstates and obtain something known as a coherent state that corresponds to the probability distribution concentrated near some specific position oscillating in time.

That looks more like a classical weight on the spring, isn't it? Indeed you may find that it is coherent states that behave according to the classical dynamics in certain limit, not the eigenstates. In the field theory context the coherent states of the electromagnetic field behave like some sort of a "fuzzy" classical EM wave. The higher the intensity the more classical they appear but for low intensities it appears more like a random number of photons. 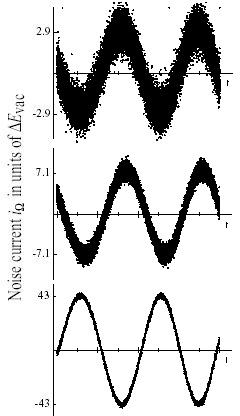 What's about actual light? The radiowave or sufficiently strong beam of laser are good examples of light coming from the coherent states of EM field. However the light from a lightbulb is not coherent and to describe it with classical EM wave is actually not very appropriate.

Elementary particles, and photons are such in the standard model of physics, exhibit, as you correctly say, in the probability density the wave particle duality.

It is instructive to look at experiments of single particles scattering off double slits,

This are single electrons scattering off the two slits, and the wave interference pattern appears in the accumulation, which is the measurement of the probability density for this scattering.

The difference is that photons build up the classical electromagnetic wave, whereas there is nothing like that corresponding to the massive particle and probability waves. Zero mass particles can be modeled by quantizing the classical equation. In this case Maxwell's equation, which gives the varying E and B fields is quantized, and the wave function of the photons building up the classical field contain the information of the E and B field. The probability density of any interaction is given by the complex conjugate square of the wave function.

So the superposition of photons ( addition of wavefunctions) can build up in synergy electric and magnetic fields which show the interference pattern in the probability density distribution.

Individual photons themselves when interacting , have only energy, momentum and spin. In an ensemble their wavefunctions are added in superposition thus creating the macroscopically measured electric and magnetic fields of the classical wave. (Any measurement involves the complex conjugate square of the underlying wavefunction of an ensemble).

At the macroscopic level, the mathematical description of varying electric and magnetic fields building up the classical electromagnetic wave, is correct, as it emerges from the underlying quantum mechanical state.( The last link needs the tools of quantum field theory to follow the mathematics).

Thus the classical EM wave is not an outdated concept, it is an absolutely useful mathematical representation, as the technological world we live in shows, in the phase space of large dimensions, and the quantum and classical models blend smoothly at the interface. In the same way that Newton's gravitational model is still valid for the appropriate phase space where general relativity effects are very small.

Yes there is a chain of electric and magnetic fields, it is built up, emerges from the wavefunctions of zillions of photons. See also this answer.

To really understand tha mathematics of what is happening one has to study in depth classical and quantum electromagnetism, and quantum field theory is necessary.

Not the answer you're looking for? Browse other questions tagged electromagnetism wave-particle-duality or ask your own question.

52
Do photons truly exist in a physical sense or are they just a useful concept like $i = \sqrt{-1}$?
14
How electromagnetic waves are created?

0
Sequence of E and B field in radio waves and in single photons
0
Temporal properties of a photon
2
Why does a real/virtual photon interact only with charged particle?
5
Is the wobbly rope depiction of a radio wave inherently wrong? And how do vectors of parallel waves align with each other?
16
Two contradictory groups of statements from two different books on quantum physics
4
Shape of electromagnetic wave
0
Creating a complete picture of induced current flowing
6
If Maxwell's equations relate fields at the same point, how can waves propagate between different points?