How electromagnetic waves are created?

Macroscopically, electromagnetic waves are produced by a changing dipole or an oscillating charged particle as shown below:

However, we also know that electromagnetic radiation is produced by simply accelerating a charged particle like below:

I have a few questions:

First of all one should have clear the difference between classical electromagnetic theory, which completely describes synchrotron radiation with the potentials generated by a classical moving charged particle, and the quantum frame for EM which consists of photons building up the classical radiation.

What frequency will the radiation of the second animation be?

Synchrotron radiation has a spectrum of frequencies as seen in the lecture referenced above: 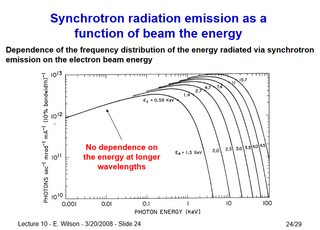 It is a continuum of photon energies emitted. At the quantum mechanical level, it is the probabilistic interaction of the charged particle with the field that is accelerating it.

The lower photon is off mass shell giving the energy, from the accelerating field, for the radiation of the real photon (upper).

If a charged particle is then hit by the radiation emitted by the second animation, would it just feel a force in a single direction, rather than an oscillatory force?

It depends on the size of the charged particle. At the quantum level it is only energies and spins that are exchanged. The single photon does not oscillate, only its wave function whose complex conjugate squared will give the probability density for the interaction to occur.

In terms of the actual photons, it would seem the first animation emits only photons with the same frequency as the particle's oscillation.

The dipole emits classical EM light with zillions of photons of energy = $h \ \nu$, the frequency, because it needs the ~1023 atoms of the dipole antenna. A single quantum mechanical particle is not a dipole (it can radiate as a dipole in an imposed field which has alternating frequency), it has to be imaged by Feynman diagrams with individual photon probabilistic radiation.

so would it would emit the exact same photons for that period?

The emission will follow the probability distribution for the solution of the above feynman diagram.

As your question hints, frequency domain analysis is a convenience which often obscures an intuition what the fields are actually doing at any given time. It takes some practice to learn to mentally jump back and forth between the frequency and time domains, but for inquiries like this, it certainly pays dividends.

The recipe is simple:

What you'll find for the second animation is that your temporal E-field waveform will be a short pulse with some duration (the pulse duration follows the duration of the acceleration). Since time and frequency are conjugate variables, the corresponding frequency will be: all of them, from close to 0 Hz up to approximately the inverse duration of the pulse (as an aside, the spectral phase will be flat, meaning that all the frequencies are in phase with each other). That is to say, a short pulse in time is a broadband pulse in frequency. There is no single frequency describing this event, unlike the oscillating charge of the first animation, which must oscillate forever to achieve a truly single-frequency ($\delta$ function) emission.

Not the answer you're looking for? Browse other questions tagged electromagnetic-radiation photons charge quantum-electrodynamics or ask your own question.

6
Why is a wave pulse a superposition of sine waves?
5
EM vs Matter wave. The lie and confusion of School Physics
7
How do antennas generate photons?
2
EM Waves, How they propagate?
2
What is the frequency distribution of the electromagnetic wave emitted by a charge accelerating along a given trajectory?
0
Does the photon field extent exceed the distance ct?