Standing waves in antenna: why is the current wave symmetric with respect to the centre? 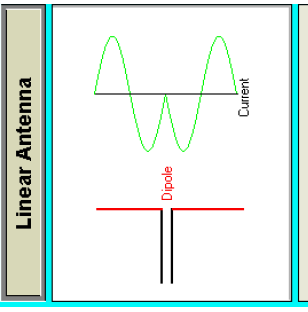 (For this and other configurations: see last pages of http://www.amanogawa.com/archive/docs/antennas1.pdf) 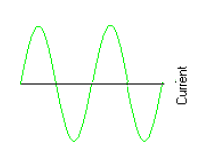 (of course it's not "current" here, but "dispacement")

I'm quite confused about this difference. I see that the reason of this difference is that the antenna in the first picture is connected in the central points to an AC current generator, and that connection "creates a condition of specular symmetry between the two branches".

But I do not see why the AC generator should provide a symmetrical situation at both sides necessarily.

On wikipedia: https://en.wikipedia.org/wiki/Antenna_(radio)#Resonant_antennas it is represented also the voltage wave for $d=\frac{\lambda}{2}$ (which is not the previous case).

It is clear that the voltage wave is not symmetric as the current wave is!

So my question is: why does the AC generator create a specular symmetric current wave for the two sides? And why is the voltage wave a "normal" standing wave (not specular) instead?

Let's go back to basics and consider just a linear current source (say just a line). If you suppose a time-harmonic field (i.e. temporal sinusoidal variation), then you will see that there are natural "fundamental" modes of the structure (eigenmodes if you want to be fancy). These correspond to the standing wave modes, similar to a vibrating string. They exist in all of the same configurations that you see, including both the symmetric and asymmetric distributions you mentioned.

However, things change a bit when you consider what modes you can excite using a balanced transmission line. If you are feeding in the center with a balanced transmission line (i.e. an AC source where the top and bottom rails have the same magnitude current), then intuitively, it makes sense that the current on the structure be symmetric. As the top half of the line flows in and up, the bottom flows out at the same magnitude. Hence, you have a symmetric distribution.

Furthermore, the feed-line is of some characteristic impedance $Z_0$, so you can't have current distributions that go to $0$ at the feed point. If you tried to do that, the line would see an infinite impedance ($Z_{ant} = V_{ant}/I_{ant} = \infty$), and so all of the input power would be reflected back down the line.

For a half-wave dipole, the input impedance is $73 +j42.5$ $\Omega$; thus, there is a reactive component, which causes a phase difference between the voltage and current. This is why you see that the standing waves are offset.

Not the answer you're looking for? Browse other questions tagged electromagnetism waves resonance dipole antennas or ask your own question.

2
The length of an antenna is twice the amplitude of the wave
5
What is happening to the electrons, and E & H fields, in an antenna with a standing wave inside?
0
Why do standing waves only occur in some specific conditions?
3
Standing waves: How are the waves not respecting the boundary conditions "cancelled" from the normal mode?
1
Spherical wavefronts from a linear electric dipole-antenna
0
Characteristics of a traveling wave on a half wave dipole antenna
0
Exactly what is the cause for the zero reactance seen in the impedance at the center feed point of a resonant half wave dipole?
0
Why is it that we never see visible spectrum waves being generated by oscillating currents in an Antenna?
0
A standing wave with different linear mass densities