In Grover's algorithm how do we flip all Fourier transformed states *except* the 0th?

According to this source, Grover's algorithm works as follows:

I am curious as to how step 4 can be implemented, as it seems to alter a single state without affecting the others (or all states except for one - same thing). To do this, don't we need to know from within an individual state whether this state is the one to flip (as we did in step 2 by testing the search criterion)?

This may relate to my confusion over the QFT. To take a Fourier transform would imply the states are ordered in some fashion - what determines this order? And to apply step 4 implies knowing which state is the 0th state, which also appears to be a question of ordering. 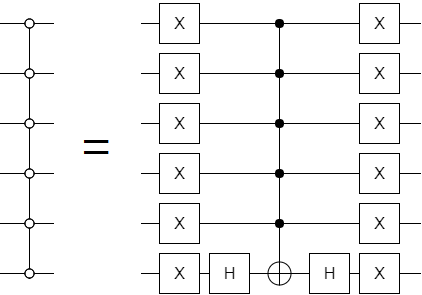 Now we have a classical problem: given fixed sized gates (e.g. CCNOTs / Toffolis), how do we implement NOTs with arbitrarily many controls? One way is to combine controls two at a time, storing the combined value on a clean ancilla, until we get down to two controls. Then we can use those two controls to toggle the intended target.

On a quantum computer it's important that we not generate any entangled garbage, so after doing that we must uncompute each of the merged controls. 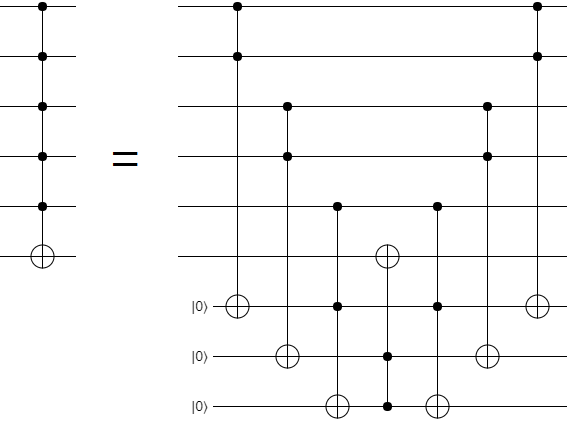 That's pretty much all there is to it.

Not the answer you're looking for? Browse other questions tagged quantum-computer or ask your own question.

2
Quantum algorithm for checking if element exists
4
Understanding amplitude amplification in quantum computing
4
Is QC with Superpositioned Quantum Gates any different than normal Quantum Computation?
0
What do operations on single Qubits of Unfactorable Superpositions Do?
1
Understanding the effect of a quantum gate on an entangled system
5
Deutsch-Jozsa Algorithm for Non-Balanced+Non-Constant Functions?
3
Measuring the speed of Grover's Algorithm
3
Extract single qubit state from combined state in QuTiP
3
What makes a Quantum Computer Faster for solving specific problems?