I'm trying to get a firm understanding of rolling resistance and friction force in FBDs. 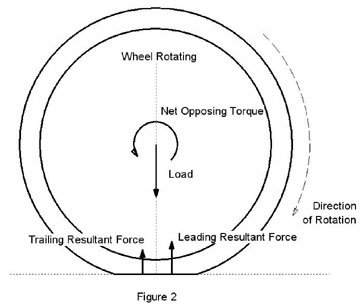 Can we say that rolling resistance (rolling friction/rolling drag) acts in an upward direction with respect to a rolling wheel (due to the leading resultant force) causing a resistive moment/torque to oppose the wheel's direction of rotation, but, from the point of view of a FBD it acts as an opposing force to the tractive force or pushing force that is accelerating the wheel/vehicle in a particular direction?

Can you please tell me if I am understanding correctly, thank you.

The wikipedia article on rolling resistance points out that there are several mechanisms at work. While the scenario illustrated in your diagram (deformable tyre on a hard road) can be modelled as a torque opposing the rotation of the wheel (also friction at the axle), other scenarios (eg hard wheel on a deformable road) might not be.

The distinction between friction force, normal reaction and rolling resistance is an artificial one, not inherent within nature, so it is not sensible to be pedantic about the differences between them, unless the distinction is made in the question.

Like friction, rolling resistance is related by some empirical law to parameters such as the normal reaction between the surfaces, the diameter of the wheel, tyre pressure, or the linear velocity of the vehicle. The law may contain several coefficients, and relates to a specific combination of materials. The wikipedia article provides examples.

Unless there is some particular reason to do otherwise, I suggest that the simplest solution is to model all forms of rolling resistance (whatever the mechanism) as a single force which opposes rolling motion.

In answer to your final question, there could be different combinations of rolling resistance and static/kinetic friction on each tyre of a moving vehicle, depending on the circumstances.

If all the wheels are the same, and bear the same load, then the rolling resistance is assumed to be the same on each, whether they are driving or braking or neither. Some wheels may bear a greater load, eg because the heavy engine is closer to them, or the car is accelerating or braking heavily. For those wheels rolling resistance will be higher.

5
Rolling resistance and static friction
3
Newtonian Mechanics - How does something like a car wheel roll?
3
When does Rolling Friction come into play?
0
Friction acting between road and tyres of a car
1
How does a front wheel drive car accelerate?