What if I fly by the Earth in a relativistic spaceship (no acceleration involved), sync the clocks with my immortal twin who is staying home, and then take a rather long trip around the closed universe? When I circle all the way to the Earth and sync the clocks again (still no acceleration), whose clock will be more vintage, mine or my twin's?

This is an excellent question! You are asking: if the universe were a large cylinder (it is sufficient that one direction is cyclic), how does the twin paradox resolve. Unlike the original twin paradox, now you can return to your twin without acceleration.

There is a pedagogical answer by Jeff Weeks in The American Mathematical Monthly (Vol 108 p. 585, 2001), which is available here (pdf). I borrow images from that document, but encourage you to read it yourself.

The best way to see the solution is to first resolve the regular (infinite-space) twin paradox using spacetime diagrams. Here's a reminder: 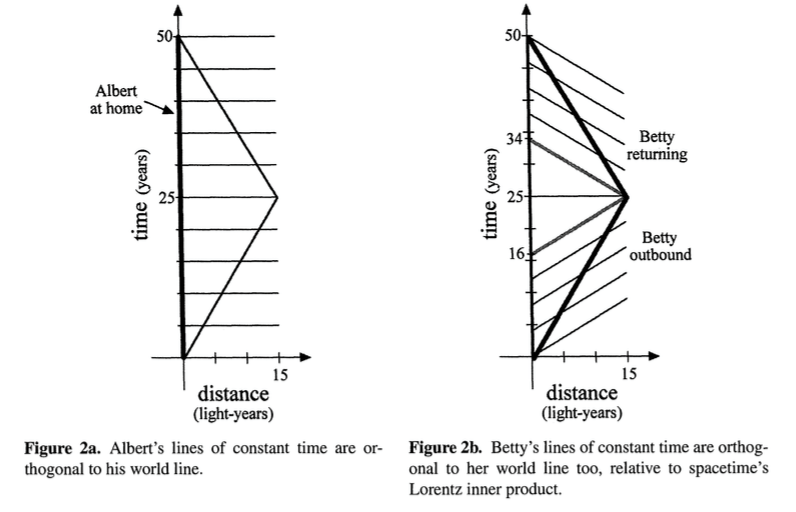 The twins are Albert and Betty, where Albert stays put relative to the observer. What's drawn are the lines of constant time at intervals of 5 years. On the left are Albert's constant time slices, while on the right are Betty's constant time slices. These are now tilted because of time dilation. If you're not used to this, I very highly recommend Very Special Relativity by Sander Bias for a readable introduction at any level. 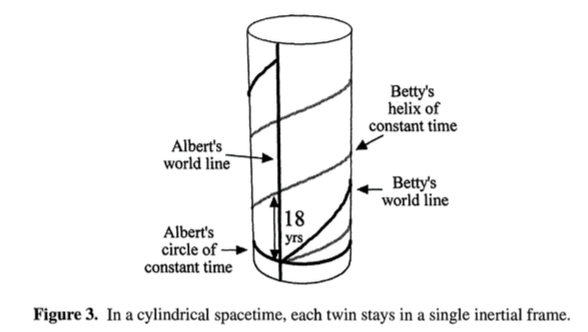 Before going into "which one is older," we should stop here because this is the resolution to the paradox. What broke the symmetry between Albert and Betty? Albert's constant time curves are circles that are closed, his is a special frame where his world line has zero winding number. Betty's world line winds around the universe and her constant time curves also wind.

For the parameters in the example, Jeff Weeks used a cylinder with circumference 30 light years so that if Betty travels with $v=(3/5)c$, she intersects with Albert when she is 40 and he is 50.

Not the answer you're looking for? Browse other questions tagged general-relativity special-relativity time or ask your own question.

35
Symmetrical twin paradox in a closed universe
4
How would Special Relativity work if the universe were periodic?
2
Why can't we define absolute rest?