In which direction does the friction act in a circular motion?

I want to know how a body moves on a circular track. Suppose a car enters a circular path. If I don't turn my steering wheel, then the car would travel in straight line and perpendicular to the radius of the circular park. In the second case I turn my steering wheel to enter into the circular path at that very moment. I think the tires would have pushed the ground and the ground would have pushed the tires back (friction force) to enter into the path. Now I must keep the steering wheel at that position to be in the circle, but on the contrary from every person I ask about the direction of friction, they tell me its towards the center. Why is only part of friction in the 'play' is that it gives reaction to action. So Why is the frictional force acting towards center.

The car wants to just continue straight. When you turn the wheels to the left, they can't roll along with the car motion. Which way would the friction act, if the car still continued straight ahead so that the turned wheels would be sliding aber the asphalt?

The friction is of course backwards. To stop the motion. There is a friction component perpendicular to the turned wheels. And it is not balanced. This is a force that pushes inwards on the circle that is about to be formed.

This is inwards friction. Static friction. If your wheels roll rather than sliding, then there is no parallel friction any more. Only the perpendicular component is present and it causes the constant direction change - the turning.

The direction of friction in circular motion varies depending on what type of circle is formed. For example in a horizontal circle, the one that you have defined with a car entering a track, friction is the provider of the centripetal force, therefore acts towards the centre of the track. The reason for this is due to the direction of motion of the wheels on the car.

In a vertical circle the direction depends on the position of the object in the circle. For example in a loop de loop.

The frictional force actually plays two roles in this situation:

1) It maintains the speed of the car. This also happenes when you are driving in a straight line: The engine works to push the car against the road in order to maintain its speed. 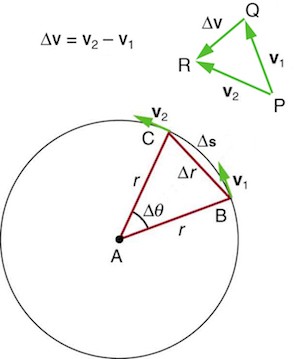 In order to keep the car in a circular motion, the velocity of your car needs to be bent towards the center of the track all the time. This change in your movement direction requires a force, and only force can do that in your situation is the friction. 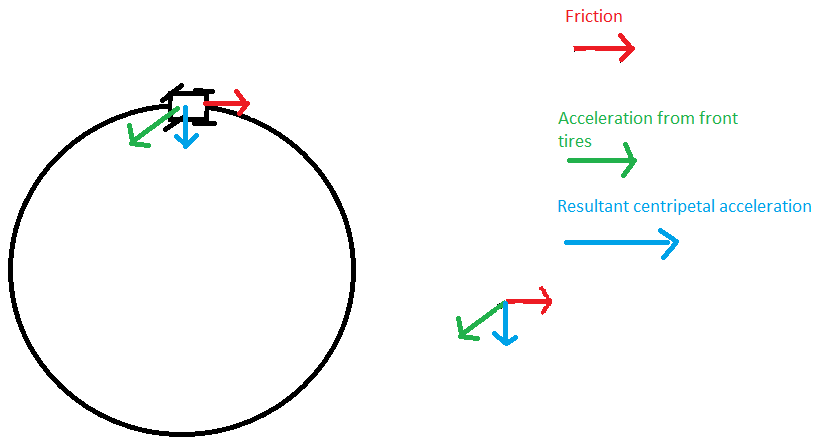 After reviewing the comments and investigating other similar questions I have surmised the following edit:

The thrust of the car, produced by the engine, and then redirected by the front wheels ( regardless of whether it is front wheel or rear wheel drive ) is converted to rotational motion in the wheels. This energy pushes the ground backwards ( unsuccessfully of course because of the large mass of the earth ) but results in a forward equal and opposite reactive force of friction which propels the car forward. This frictional force is opposing the backwards thrust on the earth which gives a forward motion to the car. And by forward, I mean in the direction that the front wheels are pointing. The resultant combination of the reacting friction force which propels the car and the more normal frictional force which opposes the motion of the car produces an acceleration towards the center of the circle.

It should be noted that friction is not a fundamental force. It is actually a result of electrostatic forces by outer electrons opposing each other in two different materials. So, when we say that friction is responsible for the forward acceleration of the car, this is a bit subjective because the force is also caused by the thrust of the engine pushing the earth backwards. The engine cannot thrust the car forward without the friction of the tires to the road, but conversely the friction cannot thrust the car forward without the engine's thrust. When we say that the acceleration towards the center of the circle ( responsible for circular motion ) is caused by friction, this is misleading because it is the combination of two separate frictional forces. One of those frictional forces being the reaction force caused by the action of the engine. In my opinion, I think it is more clear to view the centripetal acceleration as a resultant force of the thrust of the car in the direction of the steering wheels and the friction opposing the cars tangential motion.

Not the answer you're looking for? Browse other questions tagged newtonian-mechanics forces friction free-body-diagram centripetal-force or ask your own question.