Why do rainbows have distinct colors?

When I searched on the Internet for the reason of formation of rainbows, I got many explanations like this one & this. All the explanations consider only one spherical water droplet (like this one).

Why don't the refracted waves coming from the adjacent droplets interfere with each other? For example, why doesn't a red ray coincide with a violet ray coming from another droplet at a suitable position?

How are we able to see rainbows with distinct colors? Since there are thousands of raindrops in the sky when it is raining, shouldn't it be a mess due to overlapping of different wavelengths?

To understand the property of refraction through rainbows, first you could think Raindrops as falling prism-like objects... The same answer here - Refraction & Dispersion of light

(Wikipedia & Howstuffworks has a pretty good article on it...)

These images show the refraction and dispersion of light by raindrops (just like an optical prism). But, it has a small difference from a prism.. The refraction occurs twice inside a raindrop... (due to the spherical shape I think so). For a typical rainbow, the angle of refraction at which light would enter and exit the raindrop is 40°-42° for colors in the order violet-red. This 2° range is due to increasing wavelengths of different colors... 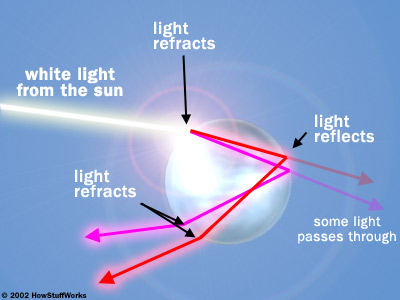 Howstuffworks shows a good comparison for the image below: 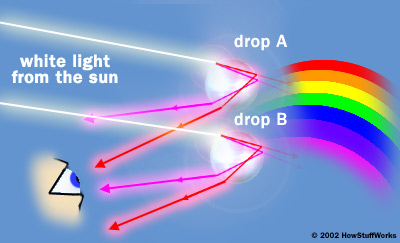 Also If you were above the ground (at some pretty higher altitude), you would be able to see the rainbow as a full circle. On ground, only the arc of rainbow which is above the horizon is visible.

But, in case of Twinned rainbows, double reflection is supposed to happen... It depends upon the difference in size of the drops and the angle of refraction would be within 50-53° range... A wonderful thing is for a twinned rainbow, an inverted rainbow would be above the real one at some distance (each being separated by a common base...

Supernumerary rainbows have a collection of bright and dark bands from violet to red due to interference. At angles very close to the required rainbow angle, two paths of light through the droplet differ only slightly, and so the two rays interfere constructively. As the angle increases, the two rays follow paths of substantially different lengths. When the difference equals half of the wavelength, the interference is completely destructive. And at even larger angles, the beams reinforce again. The result is a periodic variation in the intensity of the scattered light, a series of alternately bright and dark bands.

There was a recent paper published in the computer graphics literature that discusses non-spherical raindrops and clearly explains a lot of real-world rainbow phenomena:

Here's the official web link to the paper: http://dl.acm.org/citation.cfm?id=2077341.2077344 But if you don't have an ACM Digital Library subscription, it's a paywall, so here's a link to the author's page which has a preprint available: http://zurich.disneyresearch.com/~wjarosz/publications/sadeghi11physically.html

the drop presence in atmospheric works as a prism which separated white light into different color a so a rainbow having different colour seems to we . in long reason we can says that when drop or molecules are lies on the path of sunshine they absorbed some light and some reflected which lies on our eyes then a reciprocal image created on retina and by mind we seen a beautiful rainbow

Not the answer you're looking for? Browse other questions tagged optics refraction wavelength or ask your own question.

2
Why does a rainbow only form with a 42° angle?
33
Why aren't rainbows blurred-out into nothing after they are produced?

3
Double rainbows
0
Any material to have a significant difference for different colors?
7
Rainbows at other wavelengths
56
Do rainbows have ultraviolet bands and infrared bands?
0
Different colors and Metamerism
23
Why are rainbows brighter through polarized glass?
41
Why aren't rainbows more common?
1
Dispersion in Rainbows
0
Why don't we see rainbows from mirrors?