In describing the configuration of a colloidal system, one often deals with either, disordered fluid states, disordered jammed states or crystalline states (so an underlying lattice structure), but in contrast, what is a fractal structure for such a system? How does it deviate from the two extrema of fully disordered and fully ordered crystalline states?

When diffusion is the primary transport mechanism, fractal patterns may arise as the result of diffusion-limited aggregation or more specifically diffusion limited cluster aggregation (DLCA): where the colloidal particles display Brownian motion until they meet and attract, generating clusters of dimension typically between $1.7$ and $1.8$ (though that's also geometry dependent).

When a potential barrier must be overcome in order for the aggregate to form (i.e., the force between the particles is not only attractive), the process is called reaction limited cluster aggregation (RLCA) and leads to more compact clusters, with higher dimensions (e.g., $2.3$). 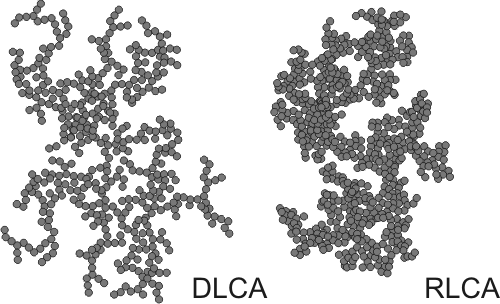 These clusters being fractal means here, essentially, that they are self similar ("look the same") when regarded at different scales (say, $\mu$m, mm, cm, etc.). In the case of colloidal aggregation, that self similarity can come about in the following way: in a first moment, colloidal particles form small clumps, then, these small aggregates form bigger ones, and then these form even bigger ones, and so on.

As for the meaning of the (typically) fractional value for the dimension of fractals, there's a quite intuitive way to understand it:

Not the answer you're looking for? Browse other questions tagged condensed-matter crystals fractals liquid-state disorder or ask your own question.

5
Why do fractal systems show power-law behavior?
13
Axioms behind entropy!
28
Understanding time crystals
10
Ergodicity in the Quantum Dimer Model
2
Can we / should we use the Pauli principle to explain band structure?
4
Tight-binding vs nearly free electron (NFE) model predictions