Minimum velocity of projectile with air resistance not at top?

Suppose I have a projectile motion without friction, the minimum velocity is always at the top.

Now I read that with friction the minimum velocity is not always at the top? Is this true? If yes, why?

This can certainly be the case. Take for example an imaginary catapult. Let's fire a round rock from it. As long as we're not using an exceptionally powerful catapult, the trajectory will be close enough to the one without air resistance that the minimum velocity will be at the top of the arc, very near what it would be without air resistance.

Now imagine you use the same catapult and fire a wad of paper. This paper wad will not have enough inertia to maintain its velocity and will slow down considerably on the way up. So much so that it will deviate considerably from its theoretical trajectory and reach its maximum height very early. We will assume that it has not yet reached its terminal velocity. From here it will accelerate towards the ground until it reaches its vertical component reaches terminal velocity. If you are very lucky, it will reach that terminal velocity in the vertical component before it loses all of the horizontal component of its velocity. If this is the case, minimum speed will be reached when all horizontal speed is lost.

Alternatively you could consider a suborbital trajectory where it reaches its maximum height outside the atmosphere and then is slowed as it reenters, but I feel that was probably not in the spirit of the question.

This is also possible when the projectile's horizontal acceleration is higher than its vertical acceleration. This can create a situation where, just after the apex, the projectile has lost more velocity in the horizontal direction than it has gained in the vertical direction. The minimum speed in this case could occur here, and could be slower than the terminal velocity.

There is a quite simple way to understand this. That the minimum velocity isn't reached at the top is pretty obvious for a projectile which is fired at an angle close to horizontal. Suppose its initial velocity is much higher than the terminal velocity that air friction imposes as it falls. The projectile will at some point reach its terminal velocity, which is smaller than its initial velocity. Since the angle at which the projectile was fired was small, it will reach the top of its trajectory pretty soon. In particular, it will reach the top before reaching terminal velocity. It is thus clear that the minimum velocity will be reached later, at some point along its trajectory as the projectile falls towards the ground (and once it loses its horizontal velocity).

Gravity and drag both reduce speed $v$ on the upward section of the trajectory, so speed decreases monotonically to the highest point (the apex). It follows that the minimum speed cannot occur before the apex.

On the downward section the vertical component of speed $v_y$ increases monotonically toward the terminal speed $v_t$, while drag decreases the horizontal component $v_x$ monotonically towards zero. If the speed at the apex is $v_1 \gt v_t$ then it is obvious that the minimum speed does occur after the apex (ie not at the top), because it must decrease to $v_t$ eventually. However, it is not so obvious whether $v$ falls below $v_t$ and then increases back to $v_t$. If $v_1 \lt v_t$ then it is not obvious or intuitive whether $v$ increases monotonically to $v_t$ after the apex or dips to a minimum. Mathematical analysis is required.

In the article Minimum and Terminal Velocities in Projectile Motion the authors report the surprising result that for drag of the form $kv^n$ the minimum speed is always lower than both terminal speed $v_t$ and the speed $v_1$ at the apex :

At the beginning, the effect of the drag is stronger than the effect of gravity if the initial speed is large enough. But once the velocity has diminished, gravity becomes dominant and accelerates the projectile until the terminal velocity is reached. There is an interplay between two opposite causes (drag and gravity) that produces the curious behavior shown in Figure 3....

Naively, one would have expected that the minimum velocity is $v_t$, but it comes out that the projectile speed diminishes until it reaches a minimum and then it starts increasing. $v_t$ is always reached from below. This means that the velocity is not a monotonous function but it shows a minimum different from both $v_1$ and $v_t$. This behavior is the same for any value of the power n in the drag force. 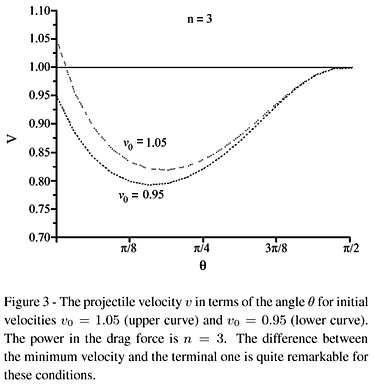 Not the answer you're looking for? Browse other questions tagged classical-mechanics kinematics projectile drag or ask your own question.