Does water need to pumped up from deep ocean?

OTEC (Ocean Thermal Energy Conversion) utilizes the temperature gradient between cold deep ocean water, and warmer water to do work. I understand the pressure in the depths may be as high as a couple of orders greater than surface atmospheric pressure.

I also remember, vaguely, that a fluid moves from an area of high pressure to low pressure; wouldn't a sealed pipe merely need valves at the top to control the flow? Does water need to be pumped up out of the deeps?

Typically, yes, the water does need to be pumped up.

Because if it released energy by rising, it would already have risen to the surface.

Tepco's OTEC plant on Nauru (1982-3) reportedly generated 120kW electricity gross, of which 90kW was needed to operate the plant. The surplus 30kW was fed into the grid.

More context: OTEC is estimated to be viable with a ${\Delta}T$ of 20 Kelvin, so definitely the tropics, and predominantly the western Pacific. Unsurprisingly, Japan has been particularly active in OTEC. The global harnessable resource is estimated at $10^{13}W$, which is the same order of magnitude as total global energy consumption. 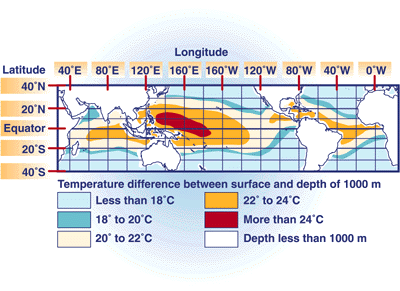 Not the answer you're looking for? Browse other questions tagged fluid-dynamics renewable-energy or ask your own question.

8
Why should fluids be confined for Pascal's Law to be applicable
9
Does water turn solid under deep ocean because of high pressure?
3
When jumping into water, how deep should the water be to survive?
6
Platform diving: How deep does one go into the water?
2
How to maintain the level of water in a container that receives liquid from a reservoir that has one exit?
2
Why does the speed of a wave travelling in shallow water increase in deep water?
0
Deep in the ocean, if an object moves quickly relative to the water does that affect the pressure on that object?
1
Why does pumped hydro require reservoirs for efficient energy storage?