I have recently learned about Feynman's disk paradox, where angular momentum is stored in the properties of the electric field. One example would be a coil with current going through whose axis is shared with a disk carrying charges on its edges. As long as the current flows through the coil the disk is motionless, but as soon as it is turned off the disk starts spinning due to the change in the magnetic field exacting a force on the charges. The explanation that I have heard why this does not violate the conservation of angular momentum is that angular momentum is stored in the electric field. So far so good.

What I dont understand is the following scenario: Suppose you were to use the contraption as described as a gyroscope: Start with a spinning disc with high angular momentum. Now stp this disc with a strong electro magnet. Assume they are both fixed to the same steel rod. Now as long as the no current is flowing and the disc is spinning it is very hard to topple the device due to precession. But as soon as the electricity is flowing there should be no more precession(?) and you can topple the device and switch the electricity off again and have the disk spinning.

Obviously that cannot happen because you would have changed the angular momentum completely with very little torque. So my question is what happens when I would try to do that?

Edit: Here a simple illustration of what I try to do: 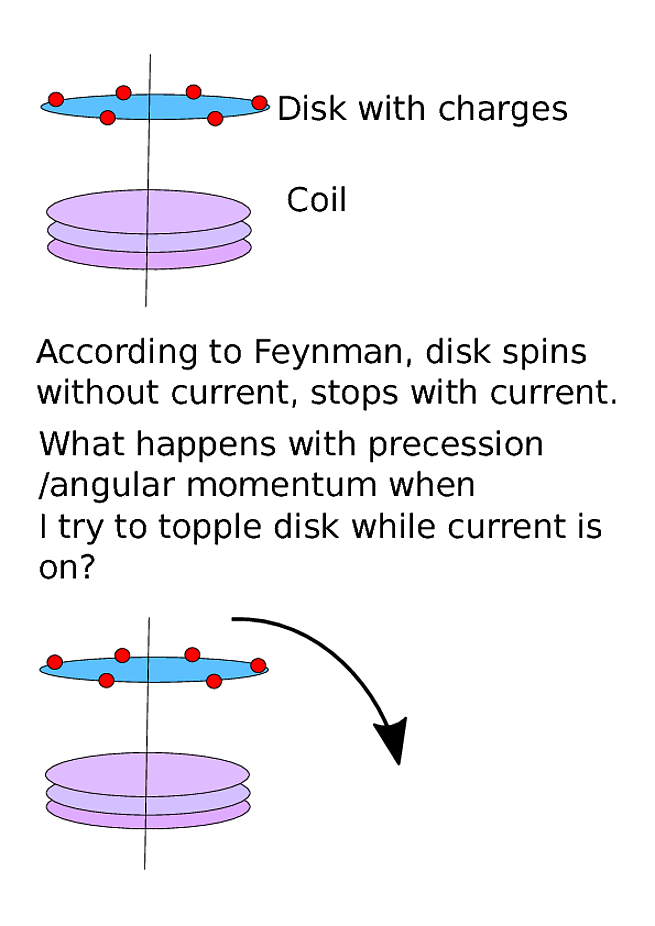 My suspicion is that the current change within the coil induces a torque pair that results in the disk slowing down while the coil begins to rotate if free in space. The total angular momentum is conserved as well as any gyroscopic behavior. If the coil is fixed due to a mechanical connection to the earth then the momentum of the disk will be transferred to the earth. In either case the total system momentum should be conserved.

Not the answer you're looking for? Browse other questions tagged electromagnetism angular-momentum thought-experiment gyroscopes precession or ask your own question.

39
What is the answer to Feynman's Disc Paradox?
3
Paradox: electric current in a coil on a disc - will this disc spin if the circuit is opened?
2
How to explain gyroscopic precession in a more intuitional way?
1
Sublimating Dry Ice off of Spinning Disk removes Momentum or Mass only
0
An attempt to solve Feynman's Disc Paradox
0
Centripetal force in a gyroscope
5
Where does the energy stored in inductor go on opening the switch?