How fast can you spin a proton or electron without breaking it?

If you spin a single nucleus containing multiple nucleons fast enough it will fly apart.

Is there a speed limit to a spinning proton or electron assuming it's held at a fixed location with a strong magnetic field?

What speed would either have to attain before breaking up, assuming they can be broken up? What would they break up into?

You can't spin up an electron. The only way that is possible is if as a string you can put angular momentum on it that way. The energy required to do that would be near Planck scale energy. So I will say this is not possible with the electron FAPP.

For the proton you can spin it up. This is the Regge trajectory that has the angular momentum $J$ as the abscissa and $M^2$as the ordinate. At the bottom here is the $940MeV$ particle, corresponding to the proton. The proton is made of three quarks and they have intrinsic spin $\frac{\hbar}{2}$ that adds up to the same. If I spin this up, we think of these three quarks as being like the masses on a bolos the Argentine gauchos use to rope cattle. The next higher state has a mass of $1680MeV$. This state is not stable and the additional $740MeV$ of rest mass can enter into the production of mesons. We may think of the proton with $udd$ quarks such that one of the $d$ quarks has its "gluon string" break so it becomes coupled to a $d$ anti-quark and the $d$ quark remains with the baryon. the $d,\bar d$ meson carries off this additional mass energy.

For a whole nucleus you have similar physics, though a bit more complicated. There are people who work with rotating nuclei. 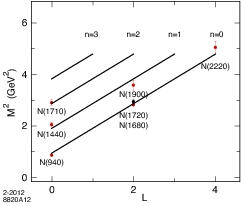 How fast can you spin a proton or electron without breaking it?

Even in the link you give, spin is a quantum number which can increase if the energy input to the nucleus is increased, the individual nuclei going to higher energy bound states ( or quantum mechanically defined bands) in higher angular momentum quantum numbers.

A proton is composed out of quarks. When enough energy is supplied to the proton the quarks settle at higher energy states with higher angular momentum. These are called baryonic resonances and are, as stated in the comments by Jonathan Gross, and can have spins higher than 1/2 of the proton neutron. The energies are of order of Mev, the delta resonance, spin 3/2, is about 200 MeV heavier than the proton and energy has to be supplied in the scattering process higher than that order of magnitude.

Not the answer you're looking for? Browse other questions tagged angular-momentum electrons quantum-spin standard-model protons or ask your own question.

9
Addition of Angular Momementa in deeply bound situations, proton spin crisis
14
Why can't I just think the spin as rotating?
6
Where does the electron get its high magnetic moment from?
7
If proton spin emergence from quarks and gluons is mysterious, why is silver atom spin not?
2
Speed of electromagnetic interactions
2
Can centrifugal force overcome other forces (in a singularity/Kerr metric)?
0
What is the difference between parallel and antiparallel spins for a pair of nucleons?
1
formation of atomic nuclei from nucleons
14
What do black holes spin relative to?
0
How exactly does the quark gluon plasma prevent protons from forming?